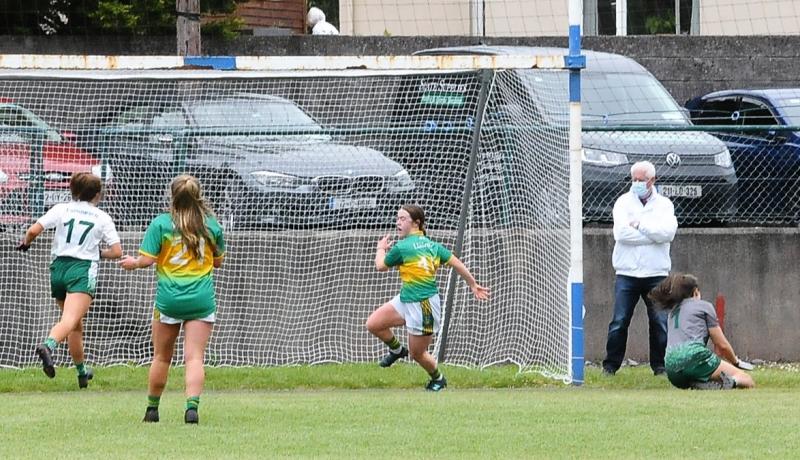 Leitrim will meet Louth in the Lidl Ladies NFL Division 4 Final on Sunday June 27, after they demolished the challenge of an outclassed Limerick in the semi-final in Milltown, Co Galway on Sunday afternoon.

From the moment the first whistle sounded, Leitrim stamped their class on this game as the ball quickly found Ailbhe Clancy and the Glencar/Manorhamilton woman fired over inside 10 seconds and it was one way traffic after that for the first half.

By the time Limerick registered their first score on 18 minutes, Leitrim had scored 1-7 and they would add further goals from hot shot Michelle Guckian and wing-forward Elise Bruen to leave this game dead in the water at the halftime interval.

Leitrim were simply too powerful, too physical and too slick for the Munster women who almost seemed as if they were caught in the headlines, such was the power and pace of the Leitrim performance.

Limerick actually outscored the Green & Gold in the second half, something that did not please manager Hugh Donnelly but that would give a false impression of this contest for Limerick scored an unanswered 1-4 in the final ten minutes when the game was already over and done.

What Leitrim will learn from this game is impossible to know for the amount of room the Green & Gold got, the lack of pressure and their ease at winning back the ball means the game was poor preparation for facing a team as tenacious and as tough as Louth in the Division 4 Final.

With just one team to go up to Division 3, that increases the stakes enormously for both teams who are in the Intermediate championship this Summer. But if they replicate only half the form they showed here, Leitrim will be very hard stopped.

Louth had a hard fought 3-10 to 2-4 win over Offaly in Clane, having led 1-7 to 1-2 at the break. Aussie Rules star Kate Flood, who did not play against Leitrim in Ballinamore, added two goals for the Wee County who ran out comfortable victors.

The game started as Leitrim meant to continue - ball won from the throw-in, quick pass to Ailbhe Clancy and over the bar. Clancy would add only two more points but her impact was felt on most of Leitrim’s scores with her accurate long passing to Michelle Guckian at full-forward causing Limerick no end of problems.

Roisin McHugh had a shot on goal which was blocked but showing great footwork and quick thinking, she flicked the ball up to a waiting Michelle Guckian for the point on three minutes. Laura O’Dowd added a point but the energetic Ballinamore woman would go to have a mixed day with some great surging runs but bad wides, including a shot that crashed off the Limerick crossbar.

Limerick gave a warning that they had a goal threat but Amy Ryan dragged her shot wide of the goal with the keeper beaten. Michelle Guckian responded with a free after a foul on Bronagh O’Rourke while Roisin McHugh tapped over a point on 10 minutes.

Guckian added a quick point after Limerick’s kickout was intercepted and after the water break, a foul on Laura O’Dowd as she bore down on goal led to another Guckian free.

Leitrim’s direct game against the wind was paying dividends as Bronagh O’Rourke fielded the high ball, turned, beat two players and managed to squeeze her shot past the defenders and keeper on 18 minutes.

Limerick responded with points from Megan Buckley and Katie Heelan but any hopes they had were rudely shattered when Clancy’s perceptive cross was fielded by Guckian who buried the ball to the net from close range on 22 minutes.

If it worked in the first half, Leitrim saw no reason why it shouldn’t in the second as Guckian fed Clancy and the Glenfarne woman fired over. Guckian added a free before Limerick’s Aine Cunningham fired over a good point.

Leitrim were content to sit and hit on the counter-attack, which worked a treat when a long ball found Guckian as she bore down on goal. However, she unselfishly passed across the goal to an unmarked Bronagh O’Rourke and an easy tap-in a la Dean Rock and the Dubs.

Guckian would add another free but Limerick’s Iris Kennelly should have goaled just before the water break but she dragged her shot wide.

A poor kickout was pounced upon for Limerick and Kennelly made no mistake this time before Ailbhe Clancy finished the Leitrim scoring with 14 minutes left from 35 yards.

Limerick’s next score was a goal but with a hint of fortune as Andrea O’Sullivan’s free caused confusion in the Leitrim defence and dipped under the crossbar on 50 minutes.

Limerick finished with four unanswered points from O’Sullivan (2), Heelan and Kennelly but Leitrim were never in any trouble as they cruised into the League Final.