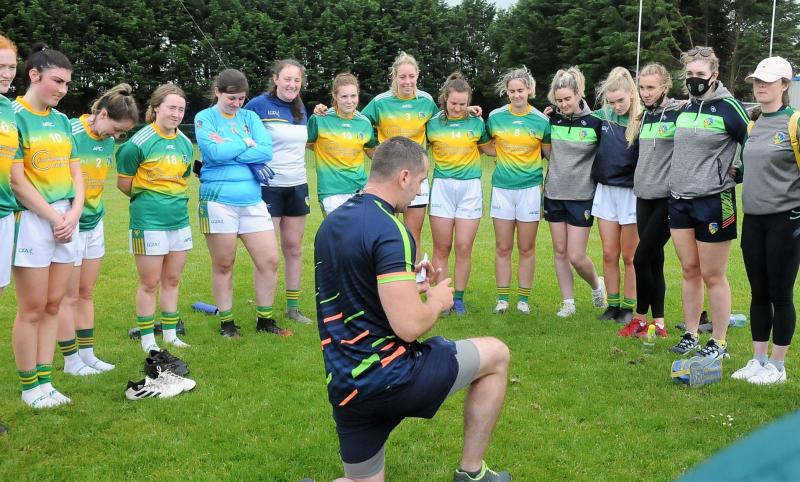 The perfect performance, the nirvana of anyone involved in sport, can be difficult to grasp but that doesn’t stop us from trying to achieve just that. Just ask Hugh Donnelly.

Smiles were broad on the scattering of Leitrim faces in Milltown GAA pitch last Sunday following an impressive 4-12 to 2-7 destruction of Limerick in the Lidl NFL Division 4 Semi-Final but smiles among the Green & Gold players were soon banished as the Leitrim manager let known in no uncertain terms that the performance wasn’t good enough.

It was instructive to hear the Leitrim manager berate his players for letting their standards drop in the second half, so much that Limerick outscored them 2-5 to 1-4, but Hugh rightly made no apologies for demanding the highest of standards.

It is a wee bit frustrating and what we can’t afford to do is paper over the cracks,” Hugh told the Observer when asked for the reasons for his displeasure, adding “We’ve got to realise that we made mistakes and address mistakes and make sure that we learn from them.

“We had put in pretty much the first 30 minutes that we wanted and that we needed and then the second half, whether it was the score or I just don’t know, we decided to go back to doing things we weren’t supposed to do and doing things that was unnecessary. It's just a wee bit frustrating that you undo all the hard work that you did in the first half.”

Now, the Tyrone native wasn’t just being a curmudgeon for the sake of it, Hugh was really impressed with the Green & Gold’s first half display but it is all about setting standards and then setting out to meet them: “That first half was probably our best half of football, everything. Compared to last Sunday up in Belfast where the first half, after 17 minutes, we were 1-5 to two points down so I couldn’t have asked for a best first half.

“I’ve talked on numerous occasions about consistency and setting a certain level and setting the bar but unfortunately there was just too many times in the second half where we fell below that.”

Neither did he seek solace in the excuse that the game was well won and it was understandable that the intensity of players would drop: “That just brings in bad habits again - you spend a lot of your time trying to get rid of bad habits but just because we are X amount of points ahead on the board, we start to take the foot off the gas. Our decision making, our distribution of ball, we conceded two very, very soft goals and that is not being disrespectful to Limerick. One was a high ball, the other was a ball that we waited for."

Far from giving the wrong impression of the Leitrim manager, Hugh was genuinely happy that Leitrim are just one step closer to achieving their target of winning promotion to Division 3: “I’m just delighted for the girls who have reached a national league final. We’re going to enjoy it, it has been a long, long time since we were last in a national league final and I’m just delighted to be a part of it again.”

Embracing the occasion is something Hugh endorses but the work must be done all the same: “We look forward to it and put the heads down for the next two weeks. The week that is in it, you have the Manor girls involved in a Connacht Final as well so it is still a busy week for the girls.”

And just in case you didn’t get the message, Hugh is unequivocal about what he expects from the clash against Louth on June 27: “I made it very clear that there is a national league title in this team from the get-go, from when I took over and still maintain that. We’ve got through step four, we’re now at step five and it is really important we finish off what we want to do and that is to win the national league.”