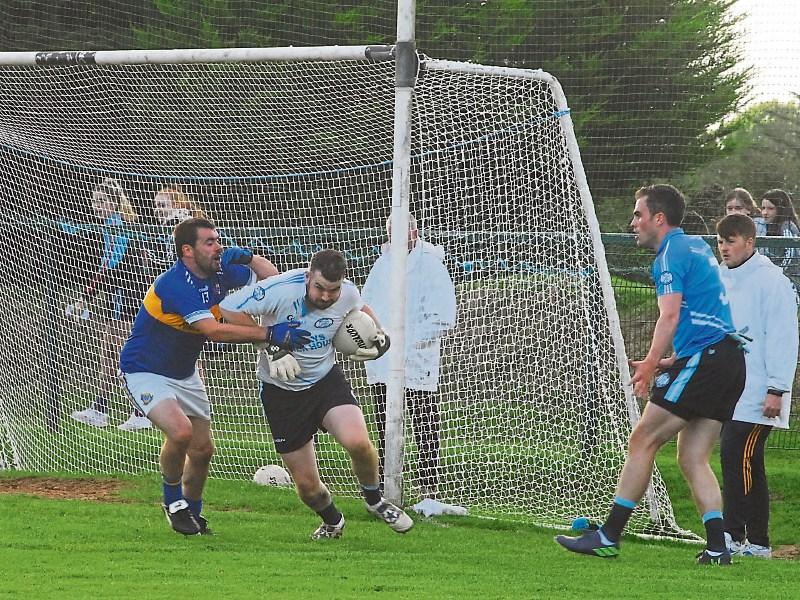 Aughawillan, operating like a well-oiled machine, simply blew the challenge of Allen Gaels out of the water in the second half of Friday’s entertaining Connacht Gold SFC Group 1 clash in Shane McGettigan Park, Drumshanbo.

Allen Gaels matched Aughawillan well in the first half as they trailed by just two points at the interval but the Drumshanbo men, who found themselves six points adrift of Aughawillan at the three-quarter stage, could perhaps still have turned the tables on the Willies’ in the final with a heroic effort.

But the dismissal of Ryan Higgins for a straight card infringement prior to the second water break put paid to the likelihood of an late Allen Gaels surge as Aughawillan ran out easy winners after shooting six unanswered points.

It took both sides a fair amount of time to settle into the action and it was not until five minutes had elapsed that the game’s opening score flashed on the scoreboard, a pointed free by Aughawillan’s Morgan Quinn had a significant impact on the outcome of the game.

The free also saw Allen Gaels’ Adrian Sorohan receive a black card, leaving the Gaels a man down for ten minutes early in the game, putting the Drumshanbo men under serious pressure for the game’s opening quarter.

Aughawillan went further ahead with points from Ciaran Gilheany (free) and Gary Plunkett while Allen Gaels goalkeeper Diarmuid McKiernan had to pull off a terrific 11th minute save to deny a Gary Plunkett effort.

Ryan Higgins reduced Aughawillan’s lead to the minimum when he shot over after 27 minutes but before the interval, Gary Plunkett and Gilheaney (free) added points for Aughawillan with Emmett Moran replying with a stylish drop kicked Allen Gaels point, leaving Aughawillan with a 0-6 to 0-4 halftime advantage.

Morgan Quinn increased Aughawillan’s lead with a point 50 seconds after the resumption but within the space of another minute it took a great save at the other end by Colin Maguire to prevent a shot from Allen Gaels Radek Oberwan entering the net.

Good goalkeeping was a feature of the game with Diarmuid McKiernan making a smart save from a 34th minute goal bound Gilheany shot. Over the next five minutes points by Dolan and sub Dara Maxwell increased Aughawillan’s advantage further.

James Flynn tapped over a 40th minute free which proved to be Allen Gaels’ final score of the game and before the end of the third quarter Pearce Dolan drove a goal chance over and Morgan Quinn hit over a spectacular long range point.

It was all one-way traffic in the final quarter with Allen Gaels failing to raise a flag of any colour and Aughawillan hitting over six points without reply. Six different players shot a point each in this spell – Mark Plunkett, Morgan Quinn, Ronan Maxwell, Fergal McTague, Pearce Dolan, and Gary Plunkett.

Allen Gaels goalkeeper Diarmuid McKiernan pulled off a top class save when he finger tipped Pearce Dolan’s goal bound shot over the crossbar.