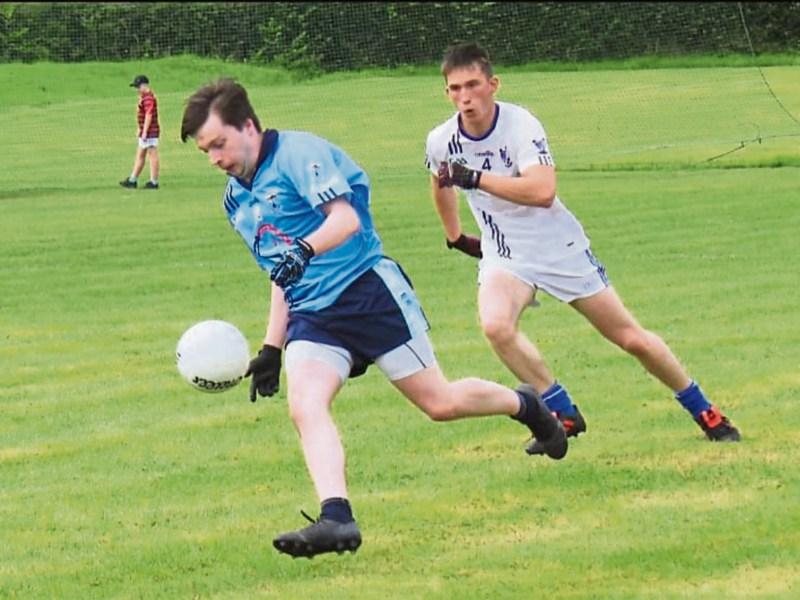 Eslin’s return to the Corrib Oil Junior A Championship was a successful and high scoring one as a strong first half put paid to Carrigallen’s hopes of causing an upset last Sunday in Eslin in a 5-14 to 1-10 win.

Eslin are traditionally the masters of the Junior grade and with their scoring power, they have to be considered among the favourites for the title along with 2020 finalists Cloone and Glenfarne Kilty. Conor Beirne landed 1-5 on the day as first half goals from Beirne, Paul Kilcrann and County hurler James McNabola put Eslin into a driving seat that they never left, despite a strong challenge from Carrigallen.

Eslin got off to a blistering start with Conor Beirne scoring a goal after just two minutes, set up by a super Eamon Reynolds pass. A point from Paul Kilcrann followed but it looked as if we might have a contest when Ciaran Kenny fisted the ball to the Eslin net after three minutes.

Kenny tied up the scores from a free but Eslin hit back impressively with Kilcrann goaling on five minutes after good work from Tomas & Conor Beirne. Colm Kiernan replied with a Carrigallen point but scores from Conor Beirne & Brian Higgins extended the lead.

A black card for JP McManus did not help Carrigallen’s cause and Eslin took full advantage as James McNabola added Eslin’s third goal along with points from Aongus McCrann, Brian Higgins (3), Joe Stenson and Conor Beirne to leave them with an imposing 3-9 to 1-2 halftime lead.

Carrigallen did improve after the break but Eslin never let down their guard. Ciaran Kenny opened the scoring with a point but a Conor Beirne chance was followed by a missed goal opportunity for Carrigallen and then a goal for Eslin’s Eamon Stenson. Another Higgins point was sandwiched between points for Colm Kiernan (2) and Niall O’Rourke but Eamon Stenson and Conor Beirne responded with points, Beirne’s score a fine three man move.

Eslin’s final goal came with ten minutes left in the half from sub Niall McNabola and although Carrigallen finished with points from Padraig Doyle, Kiernan (2) and JP McManus, Conor Beirne finished off the scoring with a point to bring his tally to for the day.

There was a surprise when 2020 Junior championship finalists Cloone were held to a draw by a strong Mohill second string on Sunday, the game ending in a 1-10 apiece draw.

Cloone started off the scoring with a point from play from Martin Tiernan but Mohill replied with two points from the boot of Ronan Gordon within ten minutes, one from a free. Adrian Nicholls tied the scores with a fisted point. Another Gordon free was matched by a point from Damian O'Donnell but just before the water break, Fiachra McGuinness edged Mohill into a 0-4 to 0-3 lead.

Gavin Reynolds tied the scores from a free after a foul on Adrian Nicholls as Cloone were beginning to settle well when Niall Quinn scored a well taken goal after a great pass from Mark Creegan. However, Mohill rallied with the accurate Gord0n again on target with two more points, one from a free, leaving two points between the teams as Cloone led 1-5 to 0-6 at the halftime break.

Cloone stretched their lead to four points with two scores in the opening ten minutes of the second half, a free from Damian O'Donnell and a Brian Mulvey point after a good Brian Donohoe pass. But just when it looked as if Cloone were beginning to stamp their authority on the game, Mohill responded with a goal from Ronan Gordon, who must have impressed Senior team manager Liam Keenan, and two further points to take the lead at the three quarter mark

That left the match in the balance for the last 15 minutes with Cloone missing a number of chances. However, points from a Damian O'Donnell free and Niall Quinn from play put them in front. Mohill again hit back with two more scores to take the lead once more but Cloone, who face Glencar Manorhamilton next Sunday in the second round, managed to force a deserved draw when Mark Creegan leveled with the last point.

A fair result in the end with Cloone and Mohill walking away with a point apiece. Mohill have a bye this weekend.

In the other Corrib Oil Junior Championship games of the weekend, St Mary's Kiltoghert and Ballinamore Sean O'Heslins both had big wins over Glencar Manorhamilton and Aughawillan respectively, the Carrick men winning 4-12 to 1-8 and Ballinamore taking a 3-19 to 0-4 victory.

Group 2 sees Cloone host Glencar Manorhamilton and given the results of last weekend, the 2020 beaten finalists should be too strong for the north Leitrim men.

The other game is an intriguing encounter between neighbours St Mary's Kiltoghert and Annaduff - it is Annaduff's first outing and the Carrick men are coming off the back of a big win over Aughawillan but these games take on a life of their own and are hard to predict.