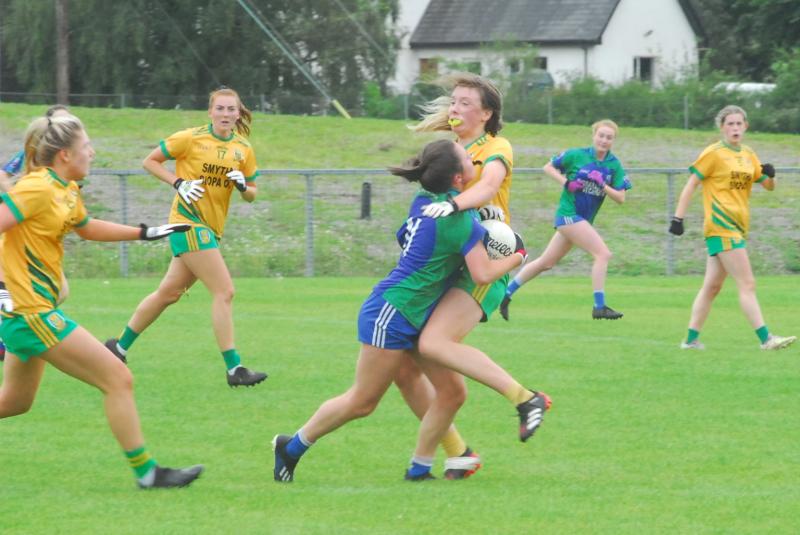 Ballinamore Sean O'Heslins opened their Gotham Dry Wall LGFA Senior Championship with a first ever senior win over former champions St Joseph's but it was far from a clear cut victory as last year's County finalists needed three vital goals to see off the challenge of the Aughavas & Carrigallen combination in Pairc Sheain Ui Eslin on Sunday.

First half goals from Roisin McHugh and Emma McGovern and a third in the second half from Laura O'Dowd proved the difference on the scoreboard but it was Ballinamore's defiance and determination to hold out against St Joseph's that decided this game, particularly when the home side were down to 14 players following the first half dismissal of Leanne McGrath.

That meant Ballinamore, eight points ahead at the break on a 2-6 to 0-4 scoreline, would face a rejuvenated St Joseph's for the entire second half but such was the determination and workrate of Conor Harte's team that it never looked as if St Joseph's actually had an extra player.

In many ways, this was a different Ballinamore performance from the high scoring draw in last year's championship where it was swash-buckling attacking football that saw O'Heslins charge to the final. Here it was defensive solidity and enormous workrate under pressure that won the day against a St Joseph's side that never really built up the momentum they needed.

Roisin McHugh was superb for Ballinamore, even if she did get pinged twice in quick succession for over-carrying, but the remarkable thing was you felt that the home team never truly hit top form in this game, missing easy goal chances and often over-carrying or misplacing passes.

Grainne Prior and Abbi Sweeney were excellent in a Ballinamore defence but in fairness, you could easily highlight the impact of Mollie Murphy, Emma Honeyman and Kelly Beirne while former Ladies All-Star Sarah McLoughlin made a substantial contribution in her first ever outing between the posts for Ballinamore, so much so that you'd have to advise Leitrim manager Hugh Donnelly to have a look at the Ballinamore woman for the County senior team immediately.

Siobhan McCartan opened the scoring after four minutes for St Joseph's but it could have been more with an unmarked player in front of the Ballinamore goal. St Joseph's were having the best of the contest at this stage as Ballinamore appeared jittery and ill at ease but a successful Roisin McHugh free seemed to settle Ballinamore.

Sarah McLoughlin made a great catch under pressure from Elaine McGovern's shot but Lily Byrne edged Ballinamore in front on 13 minutes and suddenly Ballinamore were up and running, Byrne turning over the kickout and Niamh Donohue scoring a well taken point.

Bronagh O'Rourke pointed after a quick free routine while Clare Owens made a superb catch from a Donohue free on 16 minutes but a great catch from Megan McGovern freed Laura O'Dowd for a long run that ended with a nice point for Emma McGovern.

Laoise Moran King showed great pace and power to cut through for a point and Lily Byrne got her second on 20 minutes. The big breakthrough came two minutes later when a high free into the area broke kindly for Emma McGovern but before the full-forward could strike, she was taken down by Vanessa Gallogly who was black carded and a spot kick awarded, converted expertly by Roisin McHugh.

Ballinamore should have added a second goal when they had three players bearing down on Kiera Masterson but the St Joseph's keeper managed to force McGovern to fire her shot wide. However, McGovern got immediate redemption when a high ball back into the square broke kindly for her and she fired low, soccer style, past Masterson for a vital goal.

St Joseph's almost hit back with a goal as Louise Maguire's dipping effort was heading for the top corner but McLoughlin clawed the ball away before a foul on Carmel McGovern allowed Bronagh O'Rourke to tap over the free.

Ballinamore again broke through the St Joseph's defence thanks to a Roisin McHugh run but they were denied a goal by last gasp blocks on shots from McGovern and Donohue and the game took a major turn when referee Cyril McKeon showed Leanne McGrath a straight red card for a high challenge on Bronagh O'Rourke, the county player tapping over the free.

That left Ballinamore 2-6 to 0-4 ahead at the break but down a player and when Rachel McIntyre scored a good point from the wing, they seemed on their way. Aine Heslin added a seventh minute wide but St Joseph's were missing chacnes too and when Abbi Sweeney got up the field in support of Laoise Moran King, the centre-back pointed a huge score.

Rachel McIntyre scored a brilliant solo effort that saw her weave through a few defenders to leave six between the teams but two good McLoughlin catches from O'Rourke efforts and wides from McGovern & Aine Heslin hurt St Joseph's.

They were misses that proved costly just before the second water break when great work from Roisin McHugh saw her hold up the ball and then find Laura O'Dowd on the opposite wing. O'Dowd, who charged forward, may have been going for a point but her shot dipped and went into the top of the net off the hands of Kiera Masterson.

That more or less killed off the game with Roisin McHugh converting a soft enough free for a foul on Aoibhinn McGoldrick after the break. Bronagh O'Rourke responded with a free but Ballinamore were comfortable and even when St Joseph's did break through, Sarah McLoughlin made a superb block on sub Laura McIntyre with less than three minutes remaining.

The final score fell to Clare Owens after good work from sub Jessie McManus but Ballinamore held out comfortably for the victory.