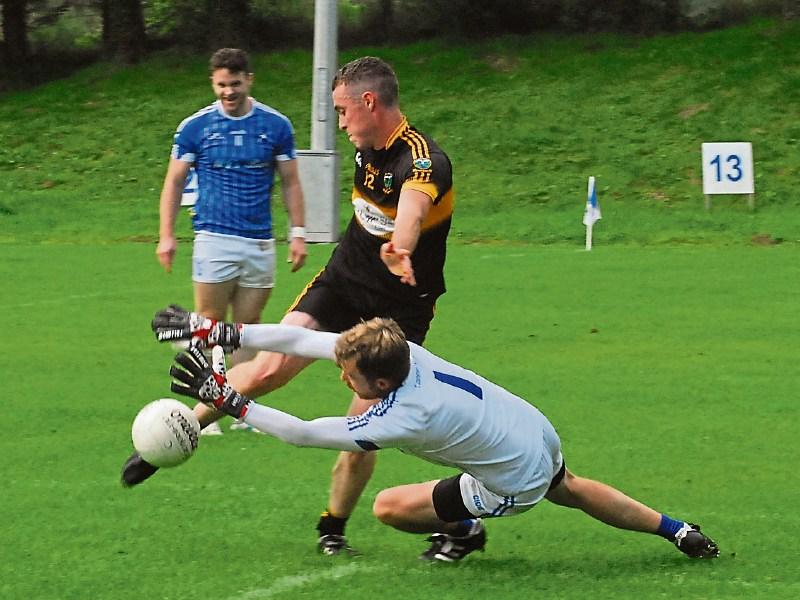 Enda Lyons makes a fantastic save to deny Bornacoola's Anthony Mulligan a certain goal during the first half last Saturday Picture: Willie Donnellan

It was billed as winner takes all and Bornacoola certainly took all as they booked their place in the Smith Monumentals IFC Quarter-Finals at the expense of a shocked Carrigallen last Saturday morning in Carrigallen.

Both teams ended Group 2 with two points but the Bors solitary came against Carrigallen, meaning they have the tie breaker thanks to the head to head victory despite the Carrigallen men having the much better scoring difference.

Bornacoola's reward is a quarter-final meeting with St Patrick's Dromahair and while they go into the game as underdogs, you sense if they play with the sort of self-belief they displayed last Saturday, they have the ability to pull off a shock.

Carrigallen now face a real test of their resolve when they take on a very unlucky Aughnasheelin in the relegation final but it will take some serious inner reflections for them to lift themselves after this disappointment.

Damian Moran proved the difference on the day, plundering two second half goals and keeping Bornacoola in contention at the various points in the game when Carrigallen threatened to run away with it.

But the home side were never able to kill off the challenge of a stubborn Bors who looked at times if they couldn't match the speed and movement of Carrigallen. But where they did excel was in sheer spirit as they hung in there and struck at just the right time.

You could sense Carrigallen growing more and more nervous as the game progressed, their confidence drifting away as Bornacoola grew in stature so much so that you could only see one winner in those final frantic minutes.

Carrigallen got off to an impressive start with four points inside the first ten minutes from Eoin Ward, Derek Reilly and two Marc Dolan frees with only an Anthony Mulligan free in response.

Howard’s score gave the Bors a big lift and despite another Dolan free, Carrigallen needed Enda Lyons to make a brilliant save from Cian Mallon after he broke through the tackle. Anthony Mulligan tied the scores after Damian Moran played the ball across the face of the Carrigallen goal.,

Bornacoola went in front with a brilliant Moran effort and a Mulligan free put them two clear. Marc Dolan pulled back a point from a free but Carrigallen were living dangerously, Enda Lyons making another speculative save to deny Anthony Mulligan a certain goal, although Danny Farrell did convert the 50.

That put Bornacoola 0-8 to 0-6 in front at the break but it seemed as if Carrigallen got their act together as they rattled off five unanswered points in the first ten minutes of the second half and seemed well on the road to victory.

Two excellent Marc Dolan efforts from play and a fine Derek Reilly effort at the end of a good move put them in front inside two minutes of the second half. The Bors were now hitting wides and good points from Matt Hackett and Eoin Ward put them three clear 11 minutes into the second half.

A block on a Damian Moran shot nevertheless saw the ball fall to Cian Mallon for a point but right on the stroke of the water break, the game took a major turn, Damian Moran gathering out on the right wing and charging in before unleashing an amazing shot, so powerful that it hit the back stanchion of the goal and rebounded out so hard that many thought he had hit the crossbar.

It was a goal and Carrigallen were rattled, missing three good chances after the water break while Bornacoola moved three clear thanks to points from Anthony Mulligan (free) and Damian Moran. Carrigallen sub Niall O’Rourke kept the game close with a good point with just over six minutes to go.

However, Bornacoola all but sealed their place in the quarter finals when Robert O’Beirne and Anthony Mulligan brilliantly combined to tear open the Carrigallen defence. A pass across the goal found Moran who fisted powerfully, his shot hitting the crossbar and bouncing down.

The umpire immediately raised the green flag, despite intense protests from the Carrigallen players but after consultations, referee Guckian awarded the goal and Bornacoola were into the quarter-finals, the icing on the cake a Mervyn Howard point that came off a break from a Bornacoola kickout.