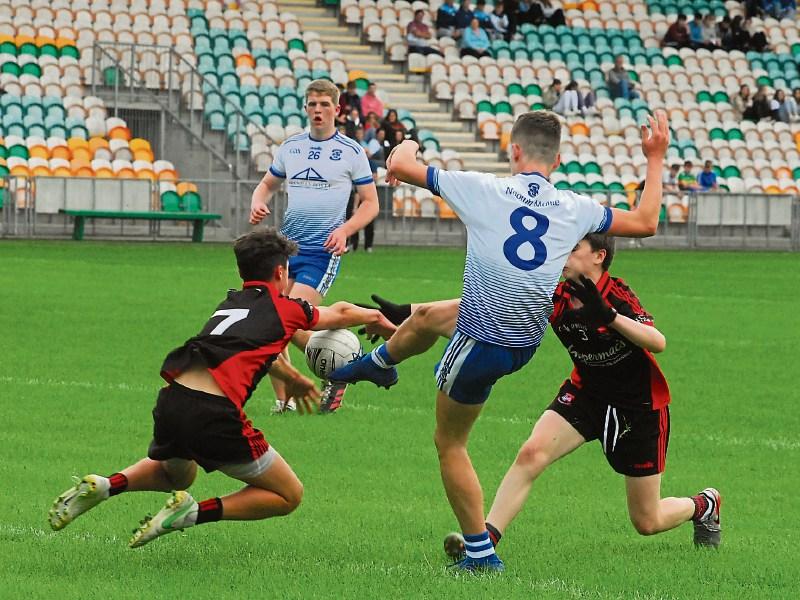 A crazy scoreline and a controversial finish sum up what was at times a bizarre yet brilliant Westlink Coaches U15 Division 1 Final with St Mary's Kiltoghert stealing it right at the death.

Bizarre came in the fact that a St Mary's team who led by seven points and 11 points at two different stages still needed a breakaway point from Brian Keaney over five minutes into added time to seal a victory where it looked as if they would cruise home.

Bizarreness came too in the form of two first half goals from long distance James Gilheaney placed balls as the ball eluded the hands of St Mary's defenders seemingly well placed to catch the ball!

There was controversy too as, to all & sundry, it appeared as if Fenagh's Ruairi O'Rourke was fouled just over 20 metres out from goal with the teams level. St Mary's Cian Reynolds cleared the danger to Brian Keaney who soloed what must have been over half the length of the field to fire over the winning point.

Fenagh supporters were incensed with the decision and, in fairness, every St Mary's supporter I spoke to after reckoned it was clearly a free but referee Mark McCloskey waved play on.

But nobody was really happy as St Mary's felt there should have been heavy sanction for a deliberate pull down and a heavy head high challenge in two separate incidents during the second half, decisions that would have changed the game.

Referees have a thankless job and a few St Mary's players who received yellow cards were lucky to stay on the field. But if McCloskey erred, it was more from a desire to let the game flow and not end a young player's game with a dismissal.

The game was a study in contrast as an individualistic St Mary's were guilty of some terrible misses and over playing the ball, contrasting with a well drilled Fenagh who refused to give up no matter what the scoreline might have said.

The first three minutes capture the insanity of this game as Diarmuid O'Connell played a one-two with Josh Maye to fire the ball to the net after 17 seconds! A block on a Ruairi O'Rourke shot led to a fifty and from that, James Gilheaney's shot flew to the net as St Mary's defenders missed the ball completely.

Straight back to the other end and a foul on Brian Keaney resulted in a penalty but Josh Maye effort was brilliantly saved by Dylan Goheen. Cian Casey pointed and two minutes later, Darragh Gardiner & Keaney combined to set up Maye for a second St Mary's goal.

Fenagh hit back with points from Eoin Conefrey, Jamie Gallogly and a Gilheaney free but a superb move the length of the field from a St Mary's kickout ended with O'Connell blasting to the net.

Two Maye points and a Keaney shot that was deflected over the bar stretched the lead but Fenagh hit back with scores from Ruairi O'Rourke and Dara Greenan. Keaney scored a fine point but Mary's had a let off when Adam Reynolds blasted wide when clean through the defence.

Luck shone on Fenagh when keeper Liam Crowe was unable to stop a fifty from Gilheaney bouncing off his hands and into the net. St Mary's saw points from Cian Reynolds and Maye stretch their lead to 3-7 to 2-5 at the interval with Crowe making two good catches from Gilheaney shots.

St Mary's started the second half like the first, this time with a clever goal from Brian Keaney. Greenan and Maye swapped points but it looked all over for Fenagh when Maye saw a goal bound shot saved only for O'Connell to force home the rebound.

It looked curtains for Fenagh but they immediately hit back with a goal from Adam Reynolds, a wonderful finish after a quick free and as St Mary's hit wides, Matthew Hargaden, Reynolds, Greenan & O'Rourke all fired over points to cut the gap back to just f0ur points.

Fenagh were walking a tightrope in defence - Colm McLoughlin was yellow carded for what looked like a deliberate pull down and James Gilheaney was carded for a flying challenge. But they also missed two gilt edged chances with Shane Keegan blasting wide in front of goal.

St Mary's were missing good chances but seemed to settle themselves when Brian Keaney pointed after a Hugh Bracken intercept. But two Gilheaney frees left just a goal in it, the second coming over a minute into added time.

Then the drama started - Gilheaney drilled the ball to the St Mary's net with over three minutes of added time played. We all thought we were headed for extra time but Fenagh put huge pressure on the kickout and worked the ball into Ruairi O'Rourke. The Fenagh youngster looked to be fouled but play continued and Brian Keaney soloed clear to fire over a dramatic match winner