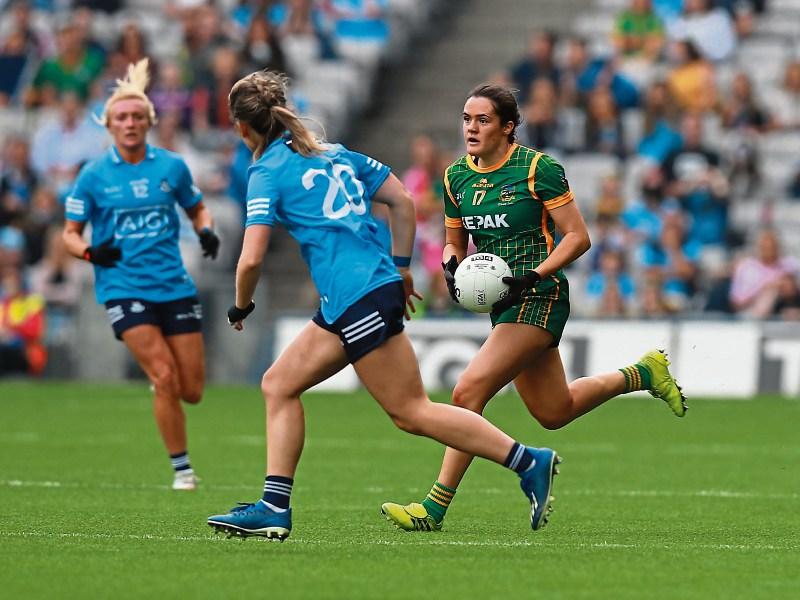 It was that long ago that the gaelic games world was looking at this year's mens and ladies championship as something of a foregone conclusion but how quickly our perceptions change when the order of things are upset.

Meath's meteoric rise to the top of the Ladies gaelic football world is one of the great stories of the sporting year, the plucky underdogs overcoming the mighty Dublin empire to lift their first ever All-Ireland Senior title a mere nine months after winning the Mary Quinn Cup and the Intermediate crown at the third time of asking.

For Leitrim folk, there is a double connection, firstly through Niamh Gallogly, daughter of former Aughavas player Frank Gallogly, coming on as an important second half substitute in their 1-11 to 0-12 victory over five-in-a-row chasing Dublin.

The other link isn't so pleasant as it was only last November that Meath took Leitrim apart in a TG4 All-Ireland Intermediate clash in Mullahoran, the 5-18 to 0-6 victory every bit as comprehensive as the scoreline suggest with the names Vicki Wall, Emma Duggan, Stacy Grimes and Marie O’Shaughnessy that have catapulted into the national consciousness, were every bit as impressive that day as they were last Sunday in Croker.

The impressive running power, endurance and non-stop tackling made the Royals worthy and deserving winners, even if they were gifted at least 1-2 in the first half directly off disastrous kickouts from Dublin keeper Ciara Trant!

But that's the nature of sport - the winner is all knowing, all wise and all conquering and their victory almost inevitable, even though the only person seemingly giving Meath a chance in the run-up to the Ladies Final was Dublin manager Mick Bohan.

Yes, history is being rewritten and re-evaluated to reflect the seismic shock that Meath created. Luck plays it part as it does for virtually every team in every competition the length and breadth of the county. It's not hard to imagine how Cork Ladies are feeling right now as Meath's spell-blinding comeback in the semi-final saw them score two goals inside the last 90 seconds was utterly bonkers and logic defying!

All it would have taken for Cork to advance to yet another final was to kick the ball long with their final kickout and Meath's fairytale was over. But, no, they went short, the ball turned over and hey presto, a goal as Meath were transformed, dominating extra-time and just like that, history was all changed!

Just look at the recent Men's semi-finals - a Tyrone shot hits the post, a Kerry man sticks out and his leg and Tyrone grab the goal that sees them into next Sunday's Final! Mayo were no less fortunate against the Dubs - think David Byrne soloing across his own endline, Diarmuid O'Connor stretching to keep a free in play or even the drama over the last free.

But that's what winners do, they make their own luck and that is how history is written as if their victory was always inevitable and not subject to a twist of fate. Even Dublin's remarkable recent success all kickstarted by pilfering the 2011 Final against Kerry.

But Meath's victory is important for other reasons. The romantic in us sees their triumph and wonders - why not us? I'm sure quite a few men's inter-county teams must be wondering if this new young team can take down a behemoth like the Dubs, why can't we?

Maybe the Ladies game, with it's three tiers, is better suited to a team rising through the ranks but the Royals aren't exactly like Leitrim, appearing in three consecutive intermediate finals and boasting 7,000 players on their books - I don't know if there are 7,000 players between mens and ladies in Leitrim but it does show the potential, and the imbalances, that exist in the gaelic game.

Next Sunday's Men's All-Ireland Final is equally fascinating - you can't exactly call Mayo plucky underdogs but they have the backing of neutrals but truth be told, both Saturday's protagonists are long time members of the elite in the men's game, not quite like Meath Ladies.

Tyrone go into the final with a strange kind of disrespect, many viewing their win over Kerry more as a failure on the Kingdom's part rather than a Tyrone triumph but you could say the same of Mayo's win over Dublin.

None of that will matter to whoever lifts Sam Maguire but I genuinely have no idea how it will go - Mayo seem to be hot favourites but Tyrone are the ultimate disruptors and part of me wonders with all the Covid controversy, if their name is not on the Cup? Only time will tell.

Whatever happens, it is going to be hard to beat Meath Ladies as the most inspirational story of 2021 for the gaelic games world.