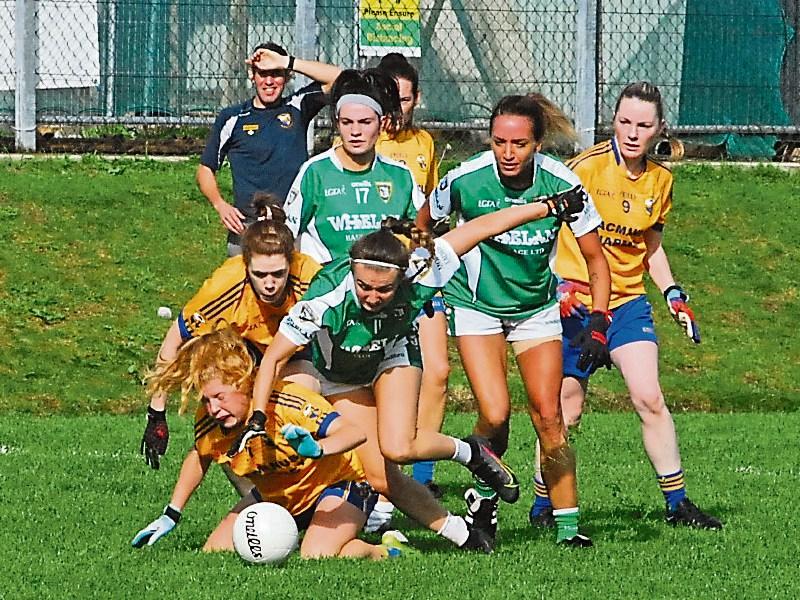 It is strange to say to lump a team unbeaten so far in the Gotham Dry Wall LGFA Senior Championship in with a team yet to register a win but champions Glencar Manorhamilton & Kiltubrid find themselves in must win situations next weekend.

With three of the five rounds completed, Ballinamore Sean O'Heslins stand undefeated at the top of the table with their third win on the trot thanks to a 5-13 to 3-12 win over Kiltubrid last Sunday. That means they are top of both the Senior A and Senior B table and assured of their place in the Senior B semi-finals at this stage.

Glencar Manorhamilton have yet to suffer a defeat but their draw against Mohill last Sunday (see report on page 56) leaves them vulnerable to missing out on the Senior A Final. The defending champions must finish in the top two to contest the A final against the Senior B winners.

They come up against a resurgent St Joseph's who had a tough, hard fought 1-11 to 1-7 victory over St Francis at the weekend for their second win of the campaign. St Joseph's, with six points, are guaranteed a spot in the Senior B Semi-Finals.

Victory for Glencar Manor against St Joseph's would seal their place in the Senior A Final but a loss would mean that the champions would have to defeat Ballinamore in their final game to make the top two places and rely on other teams to drop points.

Kiltubrid are in the same boat as Glencar Manor as they need wins and they need them now. With no wins from three outings, Kiltubrid are level with Mohill in the Senior B table and their clash next Sunday could decide who makes the final four.

A defeat would not necessarily mean the end for Kiltubrid, however, as they face St Francis in their final game on October 3. Providing St Francis do not shock Ballinamore next Sunday, the final place in the senior B quarter-finals could yet come down to that final match, a game that is also a derby!

Of course, wins for both Glencar Manor and Kiltubrid would end all their worries and a Kiltubrid win on Sunday would give them the advantage on head to head results.

In the Intermediate championship, last year's finalists Dromahair continue to set the pace with a huge 3-20 to 0-3 win over neighbours Drumkeerin on Sunday. St Brigid's got back to winning ways but had a much tougher battle than expected when they had just a point to spare against Keeldra Gaels, winning 3-9 to 2-11. That one point win is crucial as it guarantees Brigid's a place in the semi-finals.

Keeldra Gaels will be hoping that Drumkeerin do not shock the undefeated St Mary's in next Sunday's clash as a win for the Carrick women would leave Keeldra facing a winner takes all battle with the north Leitrim side in the final round. Dromahair take on St Brigid's next weekend while St Mary's travel to Drumkeerin.

In the Junior competition, both Fenagh St Caillin's and Annaduff will be looking to lay down an early marker when they meet on Sunday. As the only two first string teams in the grade, a win here would guarantee the winners a place in the final.

Annaduff ran up a big score in their victory over Glencar Manor's B team, slightly more convincing that Fenagh's win over Dromahair's B side. The two B teams from north Leitrim meet next Sunday with the winners the only team that could upset the two favourites in the final round.