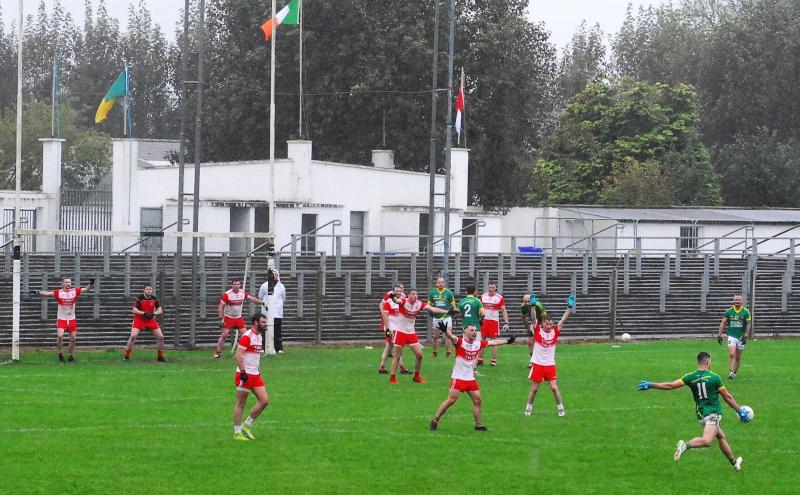 Group 1 of the Smith Monumentals Intermediate Championship completed a clean sweep in the competition's quarter-finals on Sunday when Ballinaglera produced the shock of the round when they dumped Group 2 winners Drumreilly out of the competition while Kiltubrid outlasted Aughavas with a late goal sealing their place in the semi-finals.

In the draw for the semi-finals made after Sunday's final quarter-final, Saturday winners Annaduff and St Patrick's Dromahair were drawn to face each other while Ballinaglera and Kiltubrid who emerged from Sunday's rain swept games in Avant Money Pairc Sean Mac Diarmada will face each other in the final four.

Ballinaglera's 1-8 to 1-7 victory over a misfiring Drumreilly was the story of the weekend and in truth the north Leitrim men were clearly the better side but failed to translate it fully onto the scoreboard. Their intensive, non-stop battling in every sector of the field upset Group 2 winners Drumreilly and in the end, they were well worth their win.

Yet it could easily have been a draw had Drumreilly not missed two great late chances, Donal McCabe shooting wide as the game ticked into added time while it seemed certain that we were headed to extra-time when Conor Gaffney lined up a 40 yard free in front of the posts with the three minutes of added time almost up.

However, Gaffney pulled his free to the left of the posts and Ballinaglera hung on for a deserved win as Drumreilly were never able to match their hunger and workrate around the field. Two quick points got Ballinaglera off to a good start but when Stephen Meissner palmed the ball to the net after nine minutes, Drumreilly were in front.

Drumreilly led by two points when Conor O'Brien made a vital save to deny Jimmy Holohan a second Drumreilly goal and the very next score changed the complexion of the game, Enda Maguire rifling a powerful shot to the net on 23 minutes. Drumreilly led 1-4 to 1-3 at halftime but it was tit for tat in the early stages of the second half.

Level at 1-6 apiece after 45 minutes, Seamie McMorrow and Thomas Cornyn points opened up a two point lead - a huge gap given the conditions and the nature of the game. Nigel Maguire pulled back a point but Ballinaglera held on for a famous victory.

The clash of Aughavas and Kiltubrid was the least free flowing and most cagey game of the weekend as both teams adopted strategies designed to prevent the other team's high scoring attack from functioning. It worked too as the halftime scores stood at 0-5 to 0-4 for Kiltubrid, Aughavas hitting two late points to eat into what had been a three point Kiltubrid lead.

With Seamus Sweeney and Barry McWeeney being swallowed up by impressive defensive displays, the second half was a nail biter and neither team could land a decisive blow. Fionn O'Brien & Danny McWeeney put Kiltubrid two up, Sean McKiernan and two Seamus Sweeney frees left the sides level after 50 minutes.

Aughavas took the lead for the first time with ten minutes to go when Niall McCabe finished of a patient move in style and it looked as if Aughavas, without the suspended Paul Bohan and only introducing Fintan Gallogly late on, were the team with the most momentum behind them.

Frees from Emmet Mahon and Barry McWeeney put Kiltubrid back in front but the decisive score came in added time when Kiltubrid intercepted an Aughavas attack, Danny McWeeney and sub Mickey Earley combining to put Mahon free and he drilled the ball to the net, Barry McWeeney adding an insurance point to seal a dramatic win.