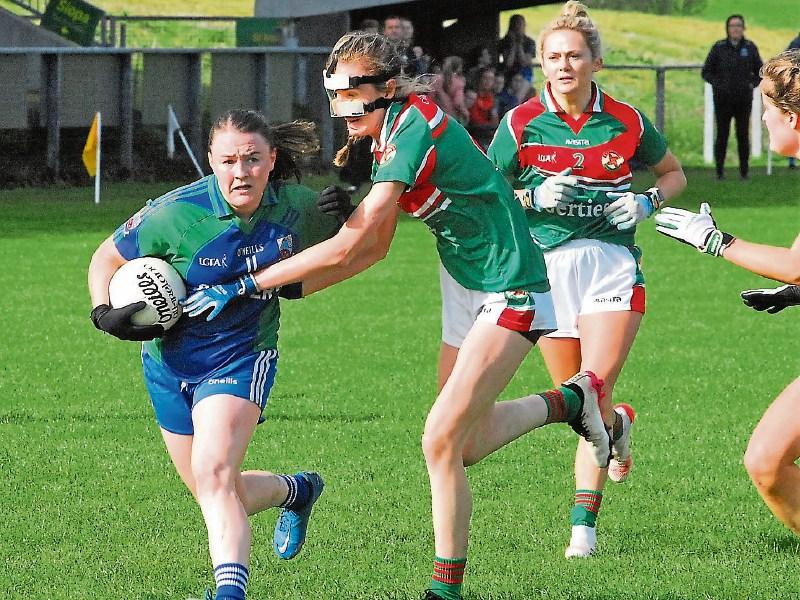 In a bruising war of attrition, Louise Maguire proved an unlikely match winner for St Joseph's last Sunday in the Gotham Dry Wall LGFA Senior B Semi-Final as the corner-back struck a dramatic winner almost six minutes into added time to break Kiltubrid hearts in Ballinamore.

With forwards from both teams failing to take chances ever since St Joseph's drew level with 53 minutes on the clock, it was the defender who burst forward and showed all the poise of an ace markswoman to kick the winner with virtually the last kick of the game.

Victory for St Joseph's looked very unlikely after the second water break as a Michelle Guckian inspired Kiltubrid resisted constant pressure to lead by three points. With scores at a premium, that gap looked like a match winning one but Joseph's refused to countenance defeat.

St Joseph's have often played better but with some key players clearly carrying injuries and well below their best, there can't have been many times they've fought as hard or shown as much resilience as they did last Sunday in Ballinamore.

Kiltubrid gave a master class in how to turn far less possession into scores. They defended like tigers and in numbers and they frustrated the hell out of St Joseph's who just couldn't break them down. And when they broke, Michelle Guckian, who scored all 1-9 of their tally, was there to strike.

Had Kiltubrid won, you couldn't have argued with it for they were more clinical but St Joseph's did dominate general play and but for some atrocious finishing, won have won far more comfortably.

Michelle Guckian opened the scoring after 35 seconds but the early story was one of St Joseph’s wides as they missed a Michelle Heslin goal chance, saw a free hit the post and register four wides with only a Celine Shortt point to show for their efforts.

Guckian quickly added a free but a good move from a kickout was finished by a Michelle Heslin point. Bronagh O’Rourke and Niamh Tighe both saw shots blocked but Kiltubrid looked to be taking control when a Joseph’s defender lost the ball coming out, it was quickly sent into Guckian who chipped a stranded keeper for a 14th minute goal.

Guckian added two points from play in the following minute as Kiltubrid stretched out to a five point lead but the water break came at the right time for Joseph’s, for immediately after it, Michelle Heslin somehow managed to get the ball across the face of the goal for Celine Shortt to boot home from close range.

Guckian and Heslin swapped points before Carmel McGovern scored a superb solo point despite slipping and have to break through tackles. Guckian hit back with a free to leave Kiltubrid 1-6 to 1-4 in front at halftime.

Michelle Heslin cut the gap with a point but St Joseph’s should have gone in front when Bronagh O’Rourke was put clean through with only the keeper to beat only to see her chip hit the post and rebound wide, a miss made more costly when Guckian scored from play and a free to open up a three point gap.

St Joseph’s were creating chances but struggling to take them although Michelle Heslin did score after a kickout was intercepted. Heslin could have had a goal but saw her shot cannon off the crossbar before McGovern shot wide.

Another great Joseph’s move was thwarted when Celine Shortt’s shot was brilliantly saved by keeper Emma Heeran and Kiltubrid made them pay with yet another Guckian free.

St Joseph’s looked in trouble as Michelle Heslin was forced from the action but then Bronagh O’Rourke fired over a free. Sub Kate Gormley won a ball back to set up Rachel McIntyre and suddenly there was just a point in it. Two minutes later, a foul on Aine Heslin was punished by a second O’Rourke free and we were level.

Kiltubrid tried to hit back but Emma Guckian shot wide and Siobhan McCartan made a superb block on a Aine Redican shot and Michelle Guckian saw her long range effort batted clear by Kiera Masterson.

St Joseph’s were pressing but lost Rachel McIntyre and Shannen O’Rourke to injury after lengthy stoppages, forcing Michelle Heslin to re-enter the fray. It looked as if we were headed to extra-time but then up popped Louise Maguire, getting on the end of a good move, breaking through a tackle and firing over from about 30 yards to grab a famous victory.