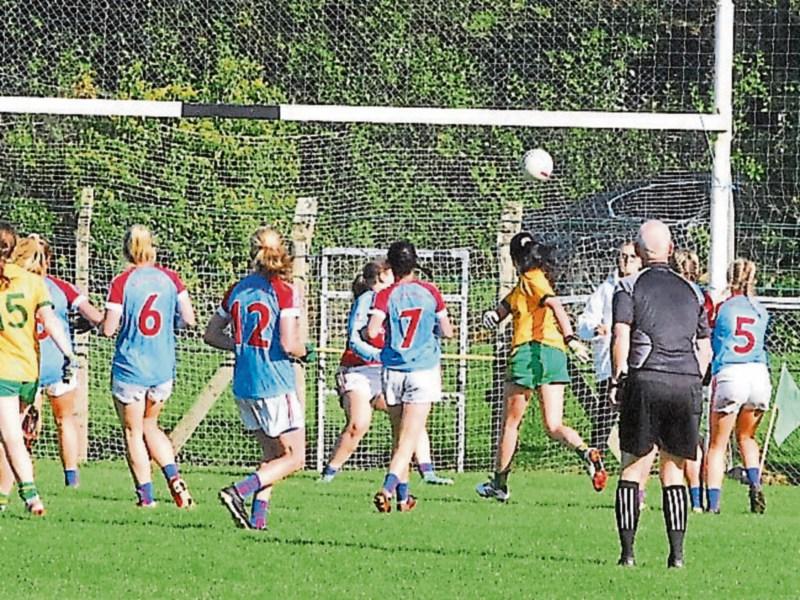 The scoreline might suggest a bit of a cakewalk but this was far from that as St Francis defied their group stages form to test Ballinamore Sean O’Heslins to the limit in an entertaining and hard fought Gotham Dry Wall LGFA Senior B Semi-Final on Saturday in Cloone.

Going on the results of the group game, you would have expected last year’s Senior finalists to cruise to an easy win but instead St Francis fought as if their lives depended on it, restricting Ballinamore’s attacks and playing with a far more clinical edge in front of posts.

With Ailish Cornyn leading the resistance with a typically powerful display around the middle of the park, it was St Francis captain Aine Flood and Ciara McPartland who caused Ballinamore the most problems, scoring four points and leaving the O’Heslins defence in a nervous state.

The Allen Gaels & Ballinaglera combination flooded bodies back in a bid to clog up the lanes Ballinamore like to run into and it worked. Any time they didn’t get bodies back, Ballinamore landed goals and those scores proved crucial in the long run.

Ballinamore go into next weekend’s Senior B Final knowing they are qualified comfortably without playing anything near their best as their attack often floundered on St Francis’ intense pressure and volume of players back in defence.

However, they are where they need to be and they will take quite a bit from this game as even without playing well, their quality eventually shone through with Grainne Prior, Abbi Sweeney and Emma Honeyman standing tall when needed most.

It was tit for tat in the opening minutes with points from Laura O’Dowd & Megan McGovern matched by scores from Sadhbh Sweeney (free) and superb Aine Flood point. With Ballinamore missing more chances, they did go in front when Roisin McHugh converted a 13th minute free.

The game took a dramatic turn when Ciara McPartland scored after a good run and a block on Ailish Cornyn led to a second Aine Flood point to put St Francis in front. But barely had the cheers died down and Laura O’Dowd pounced for a goal to put the 2020 finalists back in front.

But instead of Ballinamore driving on, it was St Francis who responded best, Cornyn and McPartland scoring good points by the 19th minute to leave a point between the sides.

Again St Francis fought back and good work from Sweeney and McPartland set up Aine Flood for her third point while Ailish Cornyn scored a wonderful effort from distance to cut the gap back to a point. However, a hard free against St Francis led to Laura O’Dowd converting to leave Ballinamore 1-6 to 0-8 ahead at the halftime break.

Ballinamore were still finding it hard to get a reward for their good work, Emma McGovern striking the post and the ball going wide after a kickout was intercepted. Roisin McHugh converted a free after a foul on Megan McGovern before the game went goal crazy.

Ailish Cornyn’s long range free looked to be drifting wide but Aine Flood darted acrobatically in front of keeper Sarah McLoughlin, brilliantly diverting the ball back in the other direction for a dramatic goal that tied the scores.

But Ballinamore struck back in devastating fashion - from the kickout they got the ball quickly to Laura O’Dowd who shrugged off Annette Reynolds’ attempted tackle and then buried a blistering shot in the back of the St Francis net.

Almost straight away, McHugh converted a free and suddenly from being level, St Francis were four points adrift. Both sides hit a few wides each before sub Alanna O’Dowd cut the gap back to a goal with a little over 10 minutes to go.

But again Ballinamore struck with venom, Roisin McHugh playing a one-two before placing a ball expertly in the top left hand corner. That finally broke St Francis’ resistance and Ballinamore with add points from Emma McGovern (2) and frees from Niamh Donohue & McHugh to run out comfortable winners in the end.