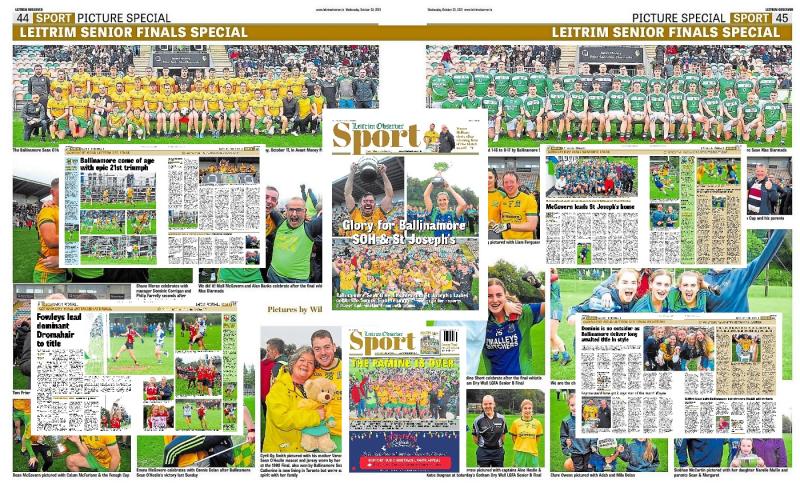 Calmed down after an epic weekend of County Final action? Well, relive the highs and the lows of last weekend's epic Connacht Gold Leitrim SFC Final between Ballinamore Sean O'Heslins and Mohill as well as St Joseph's inspiring triumph in the Gotham Dry Wall LGFA Senior B Final in this week's LEITRIM OBSERVER.

As the dust settles on an epic weekend of games, John Connolly gives his verdict on Connacht Gold SFC Final and the Gotham Dry Wall LGFA Senior B and Intermediate Finals while we hear from Ballinamore Sean O'Heslins manager Dominic Corrigan while Mohill boss Liam Keenan vows the former champions will be back even stronger in 2022.

We've produced a special 12 page pullout focusing on the Connacht Gold SFC Final and Gotham Dry Wall LGFA Senior B Final but we also have 16 more pages of sport where we preview next Sunday's Smith Monumentals Intermediate Championship Final between Ballinaglera and St Patrick's Dromahair!

We also chat with Ballinamore's long serving Liam Ferguson who said Sunday's victory was for everyone in Ballinamore while keeper Darren Maxwell described their dramatic 1-16 to 0-17 triumph as a "dream come true".

Man of the Match Wayne McKeon reckons any one of Ballinamore's players could have won the prestigious award while captain Dean McGovern does a great job in describing what Sunday's historic win means for the current generation of players, despite proclaiming "I can’t even put it into words!" when asked for his reaction to Sunday's victory.

We chat also with St Joseph's Aine Heslin, Carmel McGovern and manager Fergal Brady after their dramatic Gotham Dry Wall LGFA Senior B Final victory over Ballinamore Sean O'Heslins on Saturday in Cloone, with Aine and Carmel firmly setting their sights on Glencar Manorhamilton and this coming Saturday's Senior A Final!

We also talk to Ballinaglera manager JP Kane and captain Padarig Clarke and St Patrick's Dromahair's manager Padraig Clancy and captain Michael Clancy ahead of an eagerly anticipated Intermediate decider and Dromahair will be hoping to make it an Intermediate double after their Ladies team stormed to victory over St Mary's in the Gotham Dry Wall LGFA Intermediate Final on Sunday afternoon.

Of course, no County Final would be the same without Willie Donnellan's pictures and this week's edition of the Observer is jam packed with images from all of last weekend's games. But you can also check out galleries of Willie's photos of fans and celebrations from all the matches on our website at www.leitrimobserver.ie

So make sure you get your copy of this week's Leitrim Observer - in shops every Wednesday!