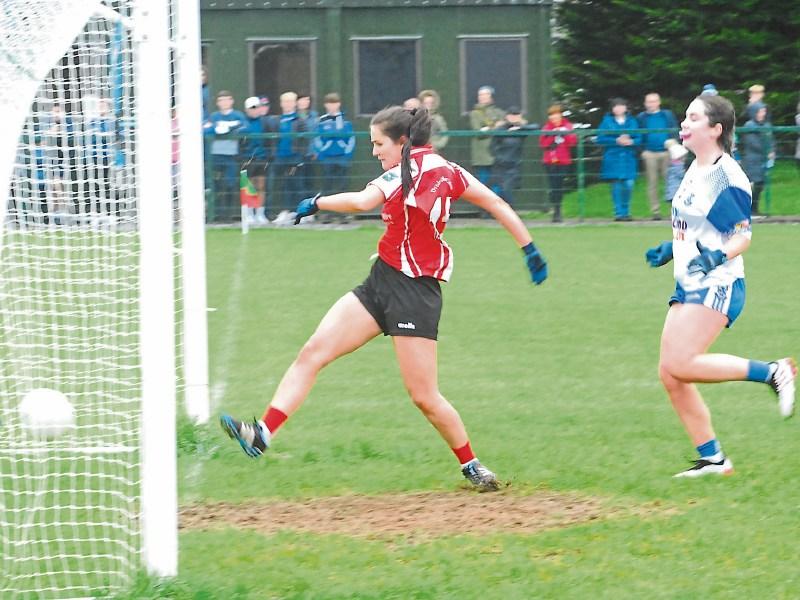 A deadly, dominant and altogether too powerful Dromahair cruised to the Gotham Dry Wall LGFA Intermediate Championship title in Kiltubrid last Sunday as they gave a young St Mary's a tough lesson in championship football.

With Roisin Fowley the keen edge of a sharp attacking unit, Dromahair gave their opponents a tough lesson on how to take chances at critical times as they made up for the disappointment of losing last year's final to easily cruise to victory here.

Truth be told, Dromahair could have won far more easily had they been that little bit more clinical during the second half, they could have added at least three more goals. But that might have been greedy as they were never remotely troubled as their fierce tackling and close marking defence never gave St Mary's any chance of making an unlikely comeback.

St Mary's actually got off to the brighter start with two fine points from Aisling Leahy in the first three minutes while Hannah Reynolds saw a shot blocked. Amy Fowley opened Dromahair's account but Roisin Fowley saw a shot blocked as St Mary's were having the better of the game.

Rachel McGarry saw a shot blocked for the Carrick women while Sarah Reynolds burst through and seemed certain to goal but she lifted her shot too high. It was a let off for Dromahair and they took note, Roisin Fowley gathering the ball out on the sideline and soloing in before firing an unstoppable shot to the Mary's net.

Amy Fowley quickly added a point but St Mary's were still creating chances, Lorraine Butler seeing a shot come off the post while they put a free wide and Lisa Guckian registered a wide.

Dromahair set about killing off the game and in five minutes, they did just that. Amy Fowley pointed after Roisin Fowley saw a shot cannon off the crossbar, the shot from the full-forward being tipped over the bar.

It was a temporary respite as a minute later, Dromahair put together a brilliant move and Roisin Fowley almost walked the ball into the net. Roisin Kelleher pulled back a point after a good move but despite a few wides, Dromahair held a comfortable 3-5 to 0-5 halftime lead.

St Mary's came out an exerted a lot of pressure but saw Leahy fire a free wide while Enya McWeeney had an effort blocked but Dromahair put the knife in when a period of patient play was ended with a good point from Laura Fowley.

The Carrick women kept coming at the Dromahair defence but Lorraine Butler saw a good shot blocked and Roisin Kelleher fired the ball across the face of goal and Dromahair broke down the field with Sinead Kelly firing over a good point.

Roisin Fowley continued with a good point but Amy Fowley should have found the net with a goal chance eight minutes into the second half. Sinead Kelly added another from midfield while Roisin Kelly tried to chip an advanced St Mary's keeper Caroline Guckian but the shot went inches wide.

St Mary's got their first score of the second half when former Leitrim star Sinead Fennelly, former McWeeney, fired over after being introduced as a sub but a great run from Roisin Kelly from a long clearance led to a fine point.

Amy Fowley was unlucky to shoot wide after being put through but Dromahair got the goal they had been threatening just before the second water break when Eabha Moyles' long range free went off the hands of an unfortunate but otherwise impressive Caroline Guckian and into the net.

Aisling Leahy completed St Mary's scoring with a point on 17 minutes and as the game petered out, Amy Fowley converted a free, Roisin Fowley made sure she would get her chipped goal and Amy Fowley added another free to complete a comprehensive and comfortable win for the new champions who will surely give the Connacht Club campaign a good rattle.