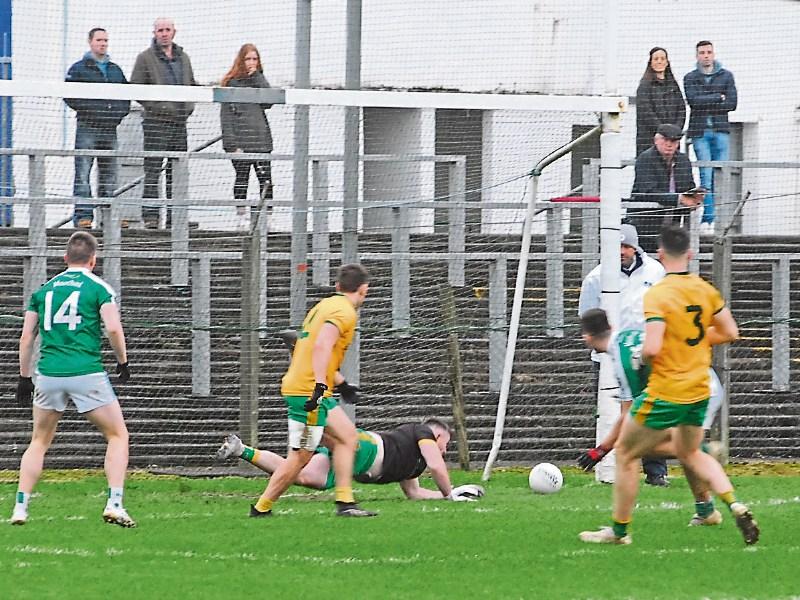 Ballinamore keeper Darren Maxwell diverts the ball around the post early in the second half Picture: Willie Donnellan

Ballinamore Sean O'Heslins came of age in more ways than one last Sunday in Avant Money Pairc Sean Mac Diarmada as they lifted the Fenagh Cup for the 21st time after a truly epic and exhilarating Connacht Gold Senior Championship Final for the ages.

Basing any judgements on social media is often a fool's errand but the torrent of praise for epic encounter last Sunday is well deserved as two fabulously well matched and huge committed teams went to the limits of endurance and beyond in a game that lifted the spirits of anyone lucky enough to witness it in person.

Ballinamore got off to a blistering start with Dean McGovern charging through from the throw-in before being fouled and Luke Murphy popped over the free. A poor kickout was pounced on and Paddy Connaughton surged through and blasted over the bar, a goal maybe on the cards.

Mohill’s response was just as impressive - Jordan Reynolds hit a fine effort on the run before Keith Beirne gathered brilliantly on the run before firing over to tie the scores and the game was less than four minutes old but the tone and tempo was set. Shane Moran broke through a tackle to fire over before a foul on Tom Prior saw Murphy add his second free on seven minutes. Mohill’s Alan Armstrong delivered a big hit to turn the ball over and before you knew it, Keith Beirne was firing the ball over the bar.

Big hits saw the smaller David Mitchell send Niall McGovern flying as he bore down on goal before Wayne McKeon (free) and Keith Beirne swapped points, an Armstrong inception and a Keith Keegan pass setting up the scores. Mohill drew level when Shane Quinn won a Ballinamore kickout and found Jordan Reynolds who bore down on goal only to see his piledriver diverted over the bar by a wonderful Darren Maxwell save.

The feeling that Ballinamore were under pressure was magnified when another Quinn pass found Keegan free in front of goal but Maxwell made a superb save on 17 minutes. Mohill took the lead on 20 minutes through Sean Harkin but Wayne McKeon scored from play almost immediately.

It was tit for tat as Michael McKiernan was sent free after Shane Moran won a throw-ball but a Beirne 50 had the sides level again. Evan Harkin edged Mohill back in front, Tom Prior rode a challenge to equalise and Keith Beirne scored a monster effort from almost 50 yards in quick succession.

McKeon tapped over what looked a harsh enough call against Mohill for a foul on Tom Prior but when Alan McLoughlin and Keith Beirne combined, Shane Quinn fired over the bar in added time. That gave Mohill a 0-10 to 0-9 after an exhilarating first half of football and if the scoring rate slowed in the second half, the intensity definitely did not. Ballinamore threatened first, a long ball into Niall McGovern but Tom Prior was sent flying by a timely challenge as the ball went wide.

At the other end, Darren Maxwell entered Ceannabo folklore with a miraculous save - Keegan, Domhnaill Flynn and Alan McLoughlin all combined to cut the Ballinamore defence wide open with Sean Harkin bearing down goal. His low shot was destined for the net but somehow Maxwell got down and got a strong enough hand to the ball to divert the ball around the post.

That value of that save was magnified when Keith Beirne’s fifty fell well short and Ballinamore tied the score with yet another McKeon free. But Mohill were on the move and two Beirne frees was followed by an excellent Keegan point as he broke through.

Crucially Tom Prior gathered a quick free to fire over and keep Ballinamore in touch but another Beirne free for a McKeon barge that was moved in for dissent left the gap at three 11 minutes into the second half. Another foul on Prior led to a Luke Murphy free but Ballinamore were beginning to threaten, James Mitchell making a wonderful interception to rob Tom Prior on his way through. Shane Moran then battled his way through a couple of challenges to fire over the bar and there was a point in it.

Then came the game’s only major controversy - Ballinamore cut open Mohill, Luke Murphy and Tom Prior combining to put Shane Moran through on goal. Moran burst past Padraig Tighe but his low ground shot was seemed to be handled on the ground by a prone David Mitchell who managed to clear the bar. It looked like a major turning point with just over ten minutes to go but Ballinamore didn’t let it upset them and when Senan Harte helped turn over a Mohill attack, Wayne McKeon and Shane Moran combined to get the ball go back to the youngster who fired over from distance.

Momentum was now with Ballinamore and when Keith Keegan was penalised for overcarrying, Wayne McKeon’s free put Ballinamore in front with less than six minutes to go.

Pandemonium broke out less than a minute later when a patient Ballinamore move eventually saw the ball worked to Dean McGovern who broke through the tackle and freed his brother Niall and his shot gave Padraig Tighe no chance in the Mohill goal.

Mohill captain Danny Beck tried to rally his troops with a lovely point and it seemed to work as Mohill started to lay siege to Ballinamore’s defence. With five minutes of added time announced, a Beirne free and a well worked Keith Keegan point left just a point in it with about 90 seconds to go. But Ballinamore would not be denied and goalscorer Niall McGovern ensured it would be Ballinamore’s day when he fired over a wonderful effort from the corner to seal a famous victory.