Dominic Corrigan was a very happy man as he led Ballinamore Sean O'Heslin's to their first title since 1990, stressing his family links to the town after their victory over Mohill last Sunday 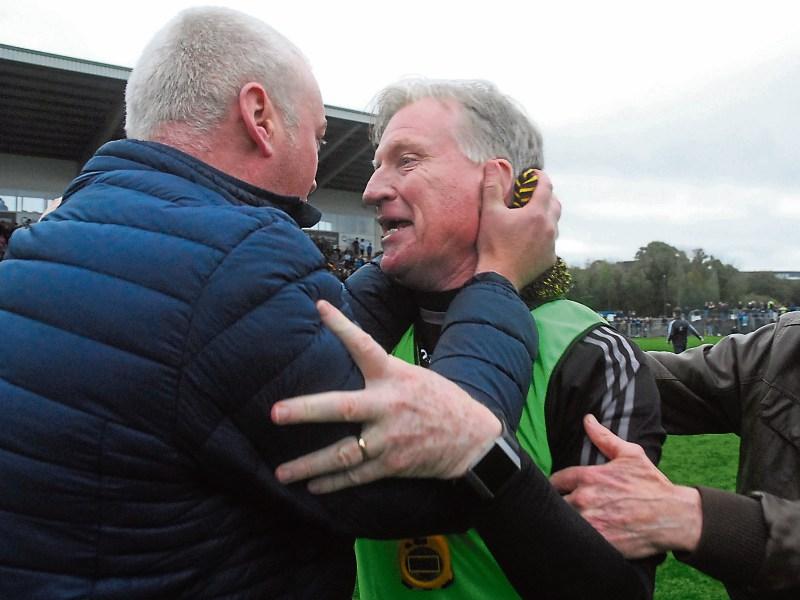 If Ballinamore natives were in the throes of delight last Sunday evening, well their adopted son Dominic Corrigan was basking quietly in the glow of a job well done after Sean O’Heslins had claimed their 21st Leitrim SFC crown in Avant Money Pairc Sean Mac Diarmada.

Ever since the former Fermanagh manager’s took over in Ballinamore, the pressure has been on to deliver but Dominic’s thoughts when he chatted to the Observer were not of personal vindication; but of his players who were celebrating on the pitch!

Asked about the pressure on himself, Dominic said “Absolutely, there are expectations surely that this outside man has to win a County title. It doesn’t always work like that - it rarely works like that, you rarely get the fairytale ending but no group of players deserve this better than this current Ballinamore crop.

“They’ve been through the ringer, they’ve been criticised. The glory teams of the past have been compared against them but they’ve put all that to bed today and they did it in style. To do it in style made it extra special.”

But here’s the thing, Dominic certainly does not feel like an outsider!

“Certainly I don’t feel like an outsider. From the day I came in, I never felt like an outsider because my mother, god rest her, has strong links with Ballinamore. The Priors, not Tom’s family, but there are about 20 different Priors in Ballinamore and my mother is linked to one of them and the Baxter's.

“So when they came calling looking for me, I always had a soft spot for Ballinamore. It was my mother’s former contacts there would have swung me to go with them and I’ve had a fantastic three years with them and we will be focusing on a Connacht Club championship.”

If there was any sense of vindication, it came from the final delivering a wonderful endorsement of his championing of club football in Leitrim in the media in the days leading up to the final: “Fantastic game of football and I knew coming into this game that they were two fantastic teams on show here today. I was delighted TG4 were showing because I knew both teams had fantastic footballer, probably never got an opportunity to be showcased on national TV.

“Today they got the opportunity and for the game to turn out the way it did was brilliant, for us to win it was super but Mohill lost nothing in defeat. They were defending champions, they fought like champions right to the end but we’re absolutely delighted. I’m delighted for the players because they put in such effort.

“I’ve been with them now for three years, we had heartbreak here two years ago and to come back here today and win it is fantastic. The game two years ago was a brilliant game as well but I felt that both teams served up some wonderful football and for us to get across the line, I’m absolutely thrilled.”

Indeed, he had a few words for advice for new Leitrim manager Andy Moran: “I’m sure Andy Moran was watching and will have picked out a lot of players from both teams. If that final was in Kerry or Dublin, people would have been raving about it, it is in Leitrim and I certainly hope to see it getting the rave reviews it deserves.”

One of those players was Darren Maxwell and even though it is not his habit to single out individual players, Dominic made an exception: “You have to highlight Darren - any one of those shots had gone, we’d have been in big trouble, they would have been a massive momentum changer in the game.

“Darren saving those shots let us off the hook and we were good enough to take advantage of his heroics, because that is exactly what they were, absolute heroics. Darren, Denis and Philip - we have three outstanding keepers in the club - any one of the three I’m happy to put in but Darren has worked his way into number one spot.”

The final turned out to real classic but Dominic believes that Ballinamore’s tougher path to the final may have helped down the final stretch: “We always knew this was going to go to the wire because you’re never going to put a quality team like Mohill away easily. We knew we had to keep at it.

“We felt we had the legs for them and probably what stood to us is that we got tough games throughout the championship whereas Mohill mightn’t have been tested as much as we were and I thought those early challenges stood to us today. We finished strong and I think we were deserving winners.”