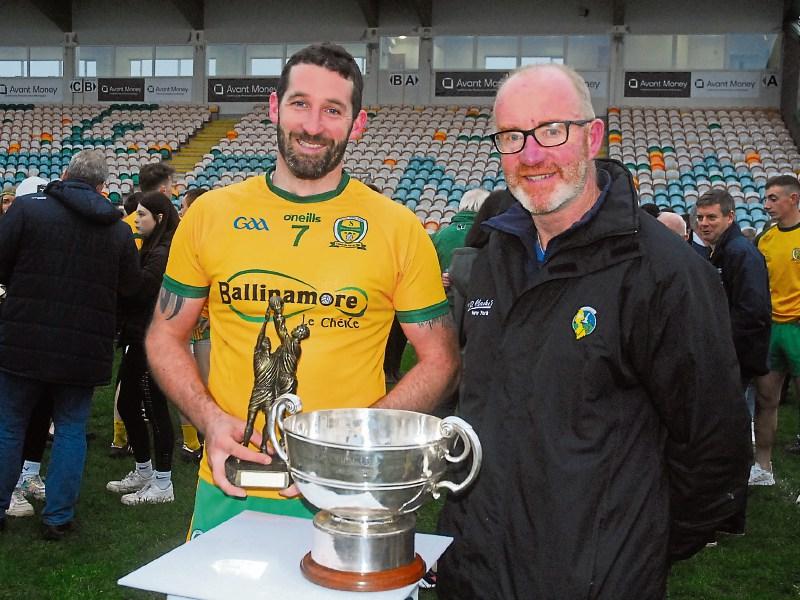 He may have been clutching the Man of the Match award but Wayne McKeon was more interested in getting his hands on the Fenagh Cup after last Sunday’s epic Connacht Gold Leitrim SFC Final victory over Mohill.

Starting off with “It means everything”, Wayne quickly dismissed the individual accolade handed out by TG4; “Any one of the boys could have got man of the match, from one to whatever was used today. That’s not the one we were looking for today, we were looking for the cup and that’s what we got. At the end of the day, anyone can have it - I don’t mind!”

Asked what it meant to finally see Ballinamore land the Fenagh Cup again, Wayne said “Two years ago gave us a taste of what it was about, we left it behind us that day so today it means everything. You can see here on the field fans still here maybe an hour after the game and I’ve seen more tears today than you would in a long time. I’d like to thank fans and our families for the sacrifices, that they let us go out and train and we’re not as home as much as we ought to be.”

It has been a long slog for Ballinamore ever since they reached the Connacht Intermediate Club Final back in 2016 and the man of the match identified the Manorhamilton match as a key turning point: “Saw it come up on the phone the other day that it has been five years since we won. Paul Prior, a neighbour of mine, got us over the line in the Intermediate and unfortunately we couldn’t win more for him at that stage.

“But he took us so far and when Dominic came in three years ago, he brought us that extra step further, took us across the line and bridged that gap. We always knew we’d be there or there abouts but it is just about breaking that duck. I think once we got over Manorhamilton this year, it was a big step stone for us. I’m playing 15 years now and I never beat Manorhamilton so it was big for the team. I think after that we had a new found level of energy.”

Wayne also paid tribute to Dominic Corrigan and his management team for the work they have done in getting Ballinamore back on top of the pile: “Personally I don’t think Dominic does pressure, he’s been there and done it all before. He brought us here today and credit where credit is due, he is up there with the best of them and hopefully to God, he stays with us.

“But whoever gets him, they’ll be very lucky because he is just football mad and he brought a whole new enthusiasm to the team since he arrived and that is what has got us over the line. The management team are the reason we are where we are - the work they put in behind the scenes is unreal and that is why we are where we are. They push us on, they give us everything we need and it is for them as much as everyone else.”

Finally, Wayne paid tribute to his teammates and the spirit in the camp: “We’re a very close team, you could say we’re as close as family and you could see out there on the pitch that everybody died for each other there today and that is what it is all about - togetherness, being there for each other and back each other up. That is what we’ve done.”