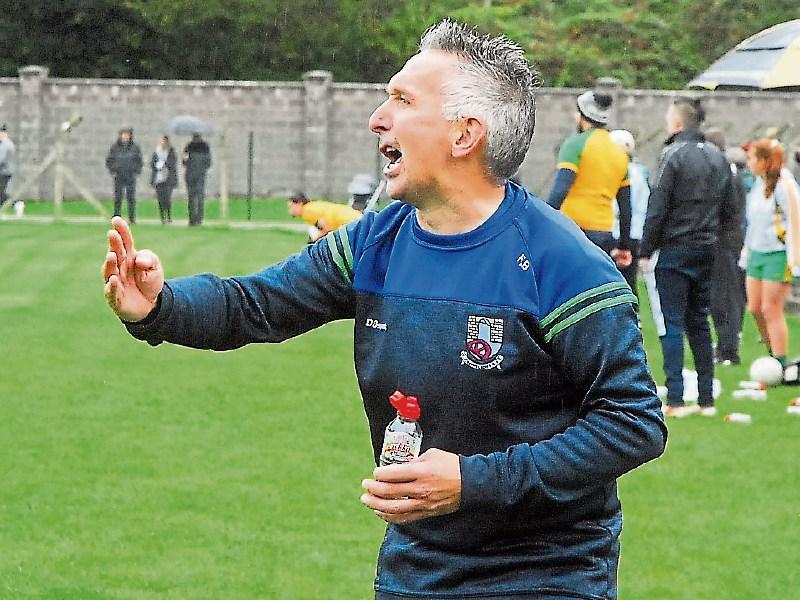 "Thank God we got over the line” was Fergal Brady’s reaction after his St Joseph’s team beat Ballinamore Sean O’Heslins last Saturday in a dramatic and intense Gotham Dry Wall LGFA Senior B Final in Cloone.

St Joseph’s 1-15 to 3-8 victory was a bit more comfortable than the scoreline might suggest with Ballinamore twice wiping out big St Joseph’s leads and manager Fergal Brady admitted his relief when the final whistle sounded.

“I wasn’t sure because at one stage, the referee said there were seven minutes left and all of a sudden, then there was nine minutes gone,” Fergal told the Observer, “We were lucky to have the four point cushion, three point cushion, you’d always be nervous. I think we had enough work done to get over the line.”

St Joseph’s upset the odds as they defied an injury crisis and a defeat at Ballinamore’s hands in the first round of the championship to qualify for the Senior A Final. But Fergal and his team wanted another crack at Ballinamore: “It is great to get over the line, we knew we had it in us.

“The first day when we played them, we were disappointed with the way we performed so that was always in the back of our heads, that if we did get the chance to play them later in the championship and thank God the chance arose.”

St Joseph’s looked well in control midway through the second half but two quick Ballinamore goals threatened their dominance: “We started off well and after the third water break, they got the two quick goals and I said this is not part of the plan because we were in control of the game, those two goals brought them back into it.

“We just three or four scores and every score was crucial at that stage and they were all good, good points. Thank God we got over the line.”

Injuries have hampered St Joseph’s but young players have really stood up to the mark for the new Senior B champions: “Rachel McIntyre is a huge loss because it disrupted our game plan for today but at the same time, players have to adjust to a different position when they are asked to do it and thank God it did work.

“It gave Kate Gormley, a 15-year-old, a chance to start in a County Final and it was a big lift for her. And Jessie McManus, another 15-year-old, coming on - this is what it is all about, you need to have a few girls to come on and trust in them.

“It is always worrying when you are picking up injuries and with the way the championship was run this year, we’ve had lot of injuries on and off, girls have played through the pain barrier so it is nice to have something to show for their efforts this year.”

Even the wides that has bedeviled their performances so far were a sign that St Joseph’s were performing well: “We had eight wides in the first half but we were creating chances.

“It was the same last week against Kiltubrid, maybe we were taking the shots from too far or the wrong options but at the same time, if the chances are there and you believe enough in yourself to kick it, go for it because the more you keep trying, it is eventually going to pay off.

“I knew we were working hard enough for us so it is just nice to get over the line and get another go at Glencar Manorhamilton next Saturday and I’m sure that was in the back of the girls heads as well because they are champions, they are the champions of Leitrim so you always would like another chance against them.”