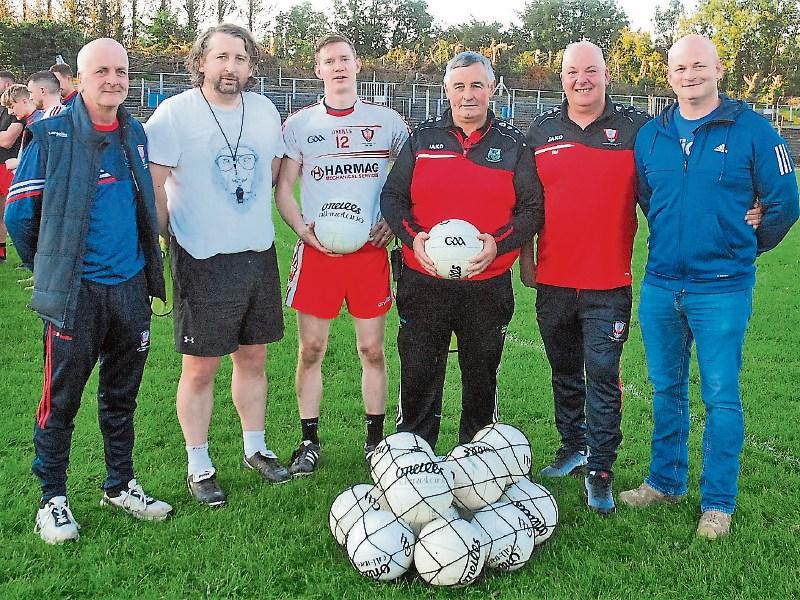 If any six words could sum up the pressure of patrolling a sideline in a championship match as a manager, well Padraig Clancy does a great job when he says of their Semi-Final victory over Annaduff “My heart is thumping, I can’t think straight!”

However, the St Patrick Dromahair manager quickly belies those words as he analyses his team’s march to next Sunday’s Smith Monumentals Intermediate Championship Final against Ballinaglera with real insight and a cool head despite all the drama of what had come before.

Padraig’s first message to his charges was to switch their attention pretty quickly to Sunday’s meeting with Ballinaglera: “Any time you get to a final is a lift, of course it is, especially when you don’t get to them that often. These lads won it in 2014 and I don’t think they’ve been back since.

“It is a great lift for the whole parish, the whole area but these boys have to step away from that, to prepare well. As I said to the lads, it is great, it is a lovely feeling to win this but it is all over now, it is all about the next game.”

One of the common themes in chatting with the Dromahair manager is his respect for the opposition and his words, spoken before Ballinaglera’s semi-final win over Kiltubrid, were prophetic! “We have to treat whoever comes through with the height of respect. Ballinaglera are in the semi-final tomorrow, I wouldn’t take Ballinaglera lightly.

“They are playing Kiltubrid, another very good team who move the ball very quickly, we were actually very lucky to beat them. Every game in the group was tight. Aughnasheelin ended up in a relegation final and they could easily have ended up in a semi-final.”

Another theme Padraig mentions regularly is just how close the line is between success and failure and he said of the win over Annaduff: “A battle, an absolute battle. From the time we conceded the goal, we were playing catch-up. We had a chance to go a point up before the second water break and it went wide.

“We thought that if we could get ahead of them, it changes everything, they’ll be chasing and we have a bit more control on it but thankfully, we got two or three very quick points in two or three minutes and that changed everything for us, it gave us huge energy and it saps energy out of the opposition. You know yourself, if they got those points, it would have sapped the energy from us and the game could have gone either way.”

So what did Dromahair do to change the game around in the second half? “I felt we were moving the ball very slowly in the first half, we were coming out of our own defence and they played a sweeper and played it very cleverly because we played two or three balls straight into his hands.

“We knew they were going to play a sweeper and you can talk all about these things beforehand but when the pressure is on, the fella with the ball can’t see everything. They played very well but they got out of the traps quicker than us, they got the goal that gave them the lift they needed. I don’t think it was the greatest game of football but it was an exciting game of football.”

It is that sort of practical wisdom that underlines Padraig’s approach to the game as, when asked about his team’s tactics, he simply says “A lot of the time it doesn’t come off but you have these plans in your head and the players, we set about doing things a certain way. But as everybody knows, football isn’t like a game of chess, things change by the millisecond.

“The ball isn’t going to land in the same place, the same man isn’t going to get it so you have to react to what is happening around you and I thought our boys, from halftime on, started to react. James Clancy changed things a wee bit for us with his pace and it gave the others a lift. James was a doubt all week but he came through it pretty well.”

The ability to adapt and improvise has served Dromahair well in this campaign and Padraig points to the depth of his panel as testament to the work his players have put in: “We said we had four League games and we’d use the League to give a game to everybody and when we got to the championship, we would take it one game at a time.

“We never looked beyond the first game against Aughnasheelin. Our second game was Ballinaglera, one hell of a battle out in Ballinaglera. Next up was Kiltubrid, another battle and then our last game was against Annaduff.

“To be honest, going up to Annaduff, we were top of the group, we couldn’t be caught so we took a chance to give fellas in the panel a run out and to be fair to them, they did very, very well and what it said to us was that we have lads who can come on and do a job for us. There have been a few changes since that day because these lads got their place that day but there are lads sitting in the stand today and they could be on the pitch next Sunday and lads on the pitch could be in the stand.”

That approach is central to Dromahair’s march to the final: “It is all about producing on the day and it is about getting the breaks. The couple of wides we had against Annaduff, it didn’t knock anything out of our lads, we went again and that’s a big thing, the heads didn’t go down so now it is about delivering on Sunday.”