Man of the Match Jamie Conlon expected a battle from Ballinaglera 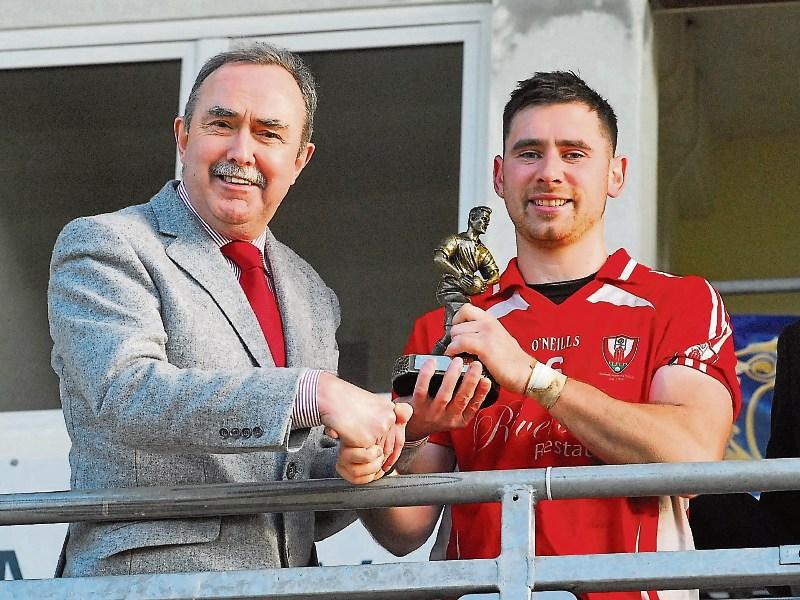 Limping but carrying the Man of the Match trophy, Jamie Conlon credited a patient approach in rebuilding the Dromahair team over the past few years for their success in last Sunday’s Smith Monumentals IFC Final.

Naturally enough, the first question to Jamie, who was cramping up and took a few heavy knocks during the game, was if it was all worth it! “Definitely worth it, these chances don’t come up too often. We fell short last year in the semi-final, that really hurt us.

“There are probably only four of us that have been in the County Final before at intermediate level, this only the second time in our history to bring the Cup back to Dromahair so we’re absolutely delighted, we took our chance today and we’re over the moon.

“This is absolutely massive for Dromahair, it is huge. We have just as much right to it as anyone else. These opportunities don’t happen in Dromahair overnight. We lost 95% of our team in 2015 after the Intermediate Final and we had to build this whole squad back up with probably only four to five players that was on that squad that day and they started again today. We have a whole new team and we brought that generation through to today.”

Critically to that was a new found strength in depth in the Dromahair squad and you sense that Jamie demands everyone give their best for the Red & White: “Building blocks, 100% and a proper squad. We have a huge panel at the moment and a second team is pushing the first team, that is what it is all about.

“If you are not pushing the first team, you are no good for us. If you are just coming to the game and being handed a jersey, that’s no good. You want three or four people hunting you for that jersey and that was the difference today.”

“We did the exact same thing against Annaduff, we didn’t panic and this is the new generation in Dromahair, we never panic on the ball, we recycle it and we’re never out of the fight and we carried that through to the final today. If you don’t believe, you will get turned over and we believed it today.”

Voted Man of the Match, Jamie stressed the important trophy was the Frank Reynolds Cup: “Obviously it is nice to get it but it is a team sport at the end of the day. I wouldn’t be able to do what I did unless somebody gave me the ball so the award is as much theirs as it is mine. I’m just delighted the Cup is coming back to Dromahair.”