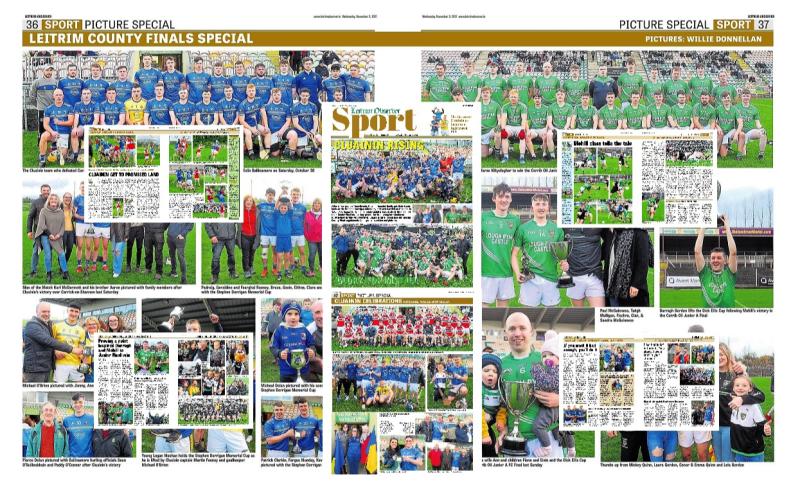 As the curtain comes down on the final club championship finals of 2021, the Leitrim Observer has produced a special 12 page supplement chronicling the victories of Cluiainin Iomaint and Mohill footballers in the Leitrim Senior Hurling and Corrib Oil Junior A Championship Finals.

The special 12 pullout concentrates on Cluainin regaining the Stephen Dorrigan Cup for the first time since 2016 and Mohill's victory over Glenfarne Kiltyclogher in the Junior A decider along with 11 more pages of sport after yet another action packed weekend of gaelic games action.

Both the pullout and supplement feature more of Willie Donnellan's photographs of fans enjoying and celebrating the four County Finals played last weekend but if you aren't included in the printed edition, check out our extensive galleries of photos from the games at www.leitrimobserver.ie.

John Connolly gives his verdict on the weekend's matches and we hear from Cluainin captain Martin Feeney and manager Clive Beattie as well as new recruit Pierce Dolan and man of the match Karl McDermott after last Saturday's Senior Hurling Final where Cluainin got the better of defending champions Carrick-on-Shannon 0-14 to 1-10.

Mohill's second string side shocked Glenfarne Kiltyclogher to win the Corrib Oil Junior A Final on Sunday, winning 2-10 to 1-4, and we hear from captain Darragh Gordon and Man of the Match Fiachra McGuinness who both point to the impact of training with the club's Senior team had on their team.

We also have reports and pictures from the Corrib Oil Junior B & C Finals where Melvin Gaels and St Patrick's Dromahair proved victorious against Allen Gaels and Kiltubrid respectively while we also report on the U13 Hurling Final where Carrick-on-Shannon made it a clean sweep of underage titles against Cluainin Iomaint.

In THE LAST POINT, John Connolly looks forward to a couple of quiet weekends but wonders about a few problems on the horizon around the scheduling of Connacht Club Mens and Ladies Championship games.

You can check it all out and more in this week's Leitrim Observer - in shops every Wednesday!