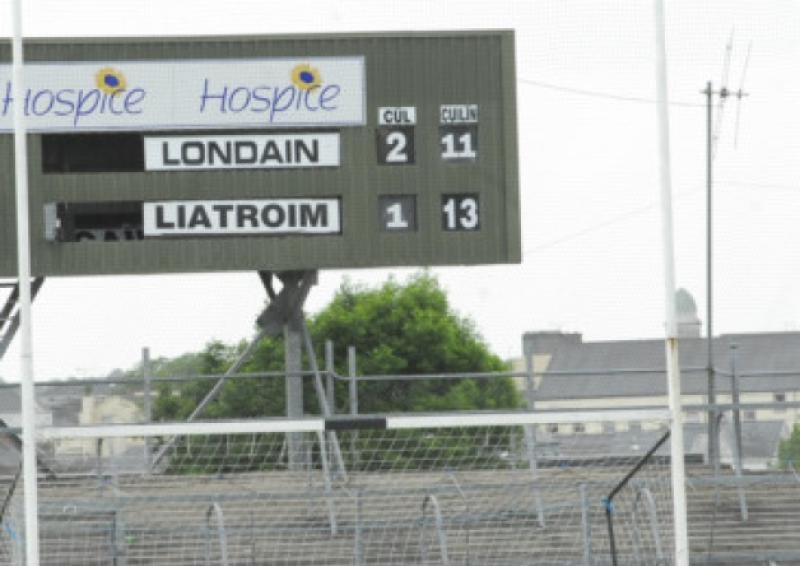 Leitrim’s dreams of reaching their first Provincial Final since 2000 were shattered in the most cruel fashion last Sunday in Hyde Park as London hung on desperately for a one point victory in the Connacht Senior Championship Semi-Final replay.

Leitrim’s dreams of reaching their first Provincial Final since 2000 were shattered in the most cruel fashion last Sunday in Hyde Park as London hung on desperately for a one point victory in the Connacht Senior Championship Semi-Final replay.

An almost unbelieveable second half comeback saw Leitrim cut a 14 point half deficit to just one at the final whistle but it was that one point that didn’t come that broke Leitrim hearts as the Exiles celebrated a famous day for Gaelic games in London.

Few would have put any money on Leitrim making any fight of it at halftime after a disastrous first half showing where London absolutely mauled the Green & Gold in every department on the field, scoring an incredible 2-10 to Leitrim’s two, was the foundation of a victory that will send shock-waves around Connacht football.

Mulligan’s withdrawal was almost expected as the captain had been fighting a losing battle to be fit all week but the loss of Sweeney was a body blow from which Leitrim never recovered.

And to compound matters, full-back Ciaran Egan did not reappear for the second half with injury in another blow to an already decimated Leitrim.

That Leitrim almost managed to salvage something from a game that was all but over at halftime only serves to make the pain worse in some ways, crucial misses from play and placed balls during the second half assuming even greater significance once the final whistle sounded.

However, the real damage was done in the first half when London gave a display of assured and calculated football that tore Leitrim to shreds - injuries did not help the Green & Gold but the power and pace of the Exiles allied with physical power was a combination Leitrim simply could not stop.

The second half, however, was a different story as Leitrim surged forward and a time when Leitrim needed leaders, Paul Brennan and Kevin Conlan stepped forward. Brennan was a human dynamo around the park, driving and cajoling his team forward and a monster free - hit with a supressed fury from almost 65 yards - typified the man.

Kevin Conlan was distraught at the final whistle after his injury time free missed the target but if Brennan was the engine of Leitrim’s fight-back, Conlan was it’s executioner, eight second half points a remarkable tally.

Conlan’s contribution from play was just as significant as he brought team-mates into the game, opened up the play and converted the chances created. It is just unfortunate that an incredible second half performance was missed by the late free.

Sub Ray Cox made a huge impact when he came on, winning frees and upsetting an already stretched and tired London rearguard while James Glancy and Paddy McGowan worked tirelessly.

London had a lot of heroes too and how Cavan must wish Lorcan Mulvey was still at home in the Blue of the Breffni County or Caolan Doyle and Paul Geraghty who dominated the middle of the field. Captain Seamus Hannon was the most impressive man on the field in the first half and it is no coincidence that the Exiles faded after he left the game at halftime.

London had some gripes about Meath referee Cormac Reilly after the game and the whistle count in the second half certainly went in Leitrim’s favour with a few lucky decisions going Leitrim’s way at both ends of the field.

It meant London were backs to the wall as Leitrim built up an enormous amount of momentum but crucially, the halftime gap was simply too much to overcome.

Leitrim must now regroup for the Qualifiers, a task that will not be easy after the immense disappointment of Hyde Park and a year that promised so much in January after the FBD League Final victory has now become something of a nightmare.

Emlyn Mulligan opened the scoring with a second minute free after a foul on Robbie Lowe but London quickly set the tone for an awesome first half display with three Lorcan Mulvey frees and a fine point from Eoin O’Neill before disaster struck when Darren Sweeney was forced from the game with injury.

Tony Gaughan swept over a huge effort as Leitrim’s day got worse when Emlyn Mulligan’s injury resurfaced, Brian McDonald coming on as Mulvey hit his fourth point of the day. Another Gaughan point followed before London struck for their first goal.

Gaughan and O’Neill combined to cut open the Leitrim defence with Greg Crowley applying a close in finish. Ciaran McCallion, O’Neill and Cathal Magee all added points before McCallion drilled a low shot to the net after good work from Seamus Hannon.

Robbie Lowe saw a long range shot cannon off the crossbar and go over but London led by an astonishing 2-10 to 0-2 at the halftime interval.

The second half began with a sub for both sides, Ciaran Egan being replaced by Sean McWeeney and London crucially losing their inspirational captain Seamus Hannon.

And Leitrim looked determined to at least regain lost pride as Kevin Conlan’s superb display of place-kicking that started to give Leitrim hope as he converted four placed balls in the first five minutes, one from a fifty.

Lorcan Mulvey replied with an eighth minute free but incredibly, that was London’s last score as they still led by 11 points.

Paddy McGowan was desperately unlucky with a shot that tailed inches wide but the most crucial miss came when London again ripped open the heart of the London defence, sending sub Colin Daly through one on one with Cathal McCrann.

The former Dublin panelist shot early but thankfully his shot scrapped the outside of the post and went wide, a goal then would have certainly killed off Leitrim’s fragile fightback.

Instead, Robbie Lowe fisted over after a pass from James Glancy and then pointed after being set up by Conlan midway through the half.

The game was still as nine points at this stage with a couple of wides from Conlan and one from Enda Williams but a Conlan score from play reduced the gap before the game was really up for grabs with Leitrim’s goal.

Kevin Conlan’s long ball saw James Glancy somehow time his jump to perfection to fist the ball out of a defender’s hands and into the net, a score that ignited the Leitrim supporters.

Seconds later Conlan added a free to narrow the gap to four points and two more in the space of a minute had the comeback really on - a Conlan free after a foul on Cox and Brennan’s massive 65 yard free left two points between the teams with five minutes to go.

Time, however, was not Leitrim’s friend - Conlan converted a free after another foul on Cox but the drama came in added time as the Dromahair man missed from his hands from 40 yards while James Glancy, after a lot of play across the field, also went wide.