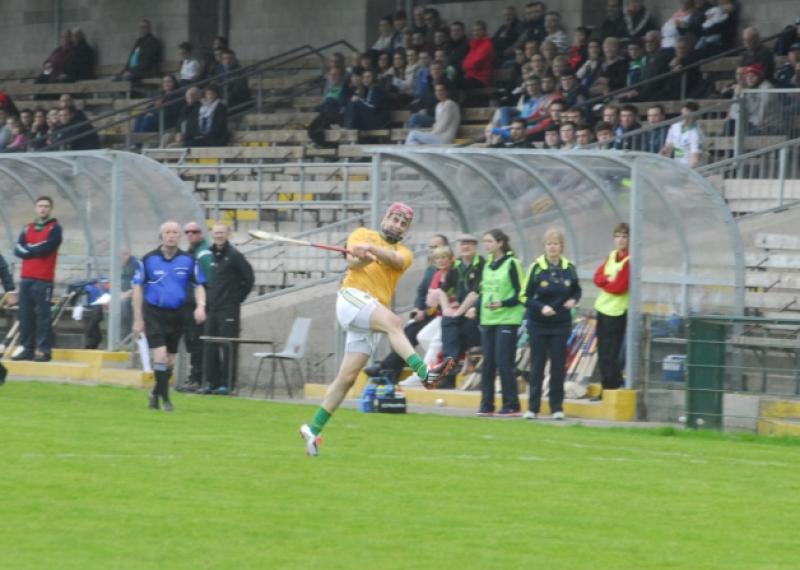 Leitrim’s bid to earn a place in the Lory Meagher Cup Final and an opportunity to showcase their skills in Croke Park came to an end last Saturday but only after a nail-biting battle with Fermanagh.

Leitrim’s bid to earn a place in the Lory Meagher Cup Final and an opportunity to showcase their skills in Croke Park came to an end last Saturday but only after a nail-biting battle with Fermanagh.

Although nearing the end of May, the conditions in Brewster Park weren’t ideal as rain fell heavily, making underfoot conditions difficult while controlling the sliothar wasn’t as easy as it might have been on a drier day.

With Padraig O’Donnell in top form Leitrim gave the home supporters plenty of reason for concern as they took the game to Fermanagh.

O’Donnell opened the scoring when he converted a second minute free after a foul on Colm Moreton.

Fermanagh were slow to settle but replied with a John Duffy free and when O’Donnell re-established Leitrim’s lead from another free, Fermanagh soon hit back as they registered the first score from play, courtesy of Kevin McGarry.

Although it may not have been translated on the scoreboard, Leitrim were very much to the fore at this early stage of what was developing into a pulsating contest.

O’Donnell increased his and Leitrim’s tally when he converted another free but approaching the 20 minute mark supporters of the Green & Gold, few in numbers but loud in voice, would have hoped for a greater lead such was Leitrim’s superior start.

Kevin McGarry struck for a wonderful point to leave just the minimum between the sides before Padraig O’Donnell replied with another free.

Leitrim replied with another Padraig O’Donnell pointed free before John Paul McGarry did well to point under pressure.

With 10 minutes of the half remaining Padraig O’Donnell gave a glimpse of what he is capable of from play as, without breaking stride, while running down the left touchline he took aim and perfectly dissected the uprights with his shot.

After a foul on Zac Moradi, O’Donnell struck for his and Leitrim’s seventh point of the half and more importantly it gave them a three point lead with nine minutes of the first half remaining.

Unfortunately from a Leitrim point of view that lead was wiped out very quickly. First John Duffy converted a free and then Ciaran Corrigan, at the second time of asking, struck for the game’s opening goal after a fine pass from Karl Kehoe.

Having seen their lead wiped out Leitrim wasted little time feeling sorry for themselves and once again it was Padraig O’Donnell who was leading the fight. After receiving the ball in space O’Donnell again shot from the left touchline and again the result was the same, with some of the Fermanagh supporters beginning to express admiration and frustration at the manner in which O’Donnell was providing their team with so many problems.

In fact O’Donnell was to have the final say in the half as he brought his and Leitrim’s tally to 0-9 with another free to enjoy a one point lead at the break.

The feeling at half-time was that if others could assist O’Donnell in terms of scoring Leitrim would have a big say in the final outcome of the game. Within minutes of the second half getting underway Leitrim extended their lead with an outstanding point from John Ryan and moments later Leitrim had a five point lead when they struck for goal.

Zac Moradi had the option of passing to the unmarked O’Donnell but he backed his ability as he beat his marker before dispatching his shot to the Fermanagh goal.

Fermanagh had an opportunity to reply almost immediately but the normally reliable John Duffy saw a penalty fly harmlessly wide.

Despite that miss Fermanagh seemed to grow in self belief as they scored four unanswered points to reduce the deficit to just the minimum.

Leitrim hit back with two Kevin Ward frees and with 16 minutes still remaining the dream of a Croke Park appearance was still alive.

Under plenty of pressure, Fermanagh got a slice of luck when they needed it most. Leitrim goalkeeper Paul Kiernan got his hurl to Kevin McGarry’s shot but he was unable to prevent the shot from finding the Leitrim goal.

Trailing by a point Leitrim gave their all in a bid to draw level and they did just that when Kevin Ward converted a free to level matters.

However, there was a steely determination to Fermanagh and three unanswered points left them in the driving seat with just five minutes left. Leitrim gave their all and with just a score between the sides there was always the hope that Leitrim would be able to force their way back into contention.

Unfortunately it wasn’t to be for Leitrim and the only additions to the scoreline came from pointed frees, converted by Kevin Ward and John Duffy for their respective sides.