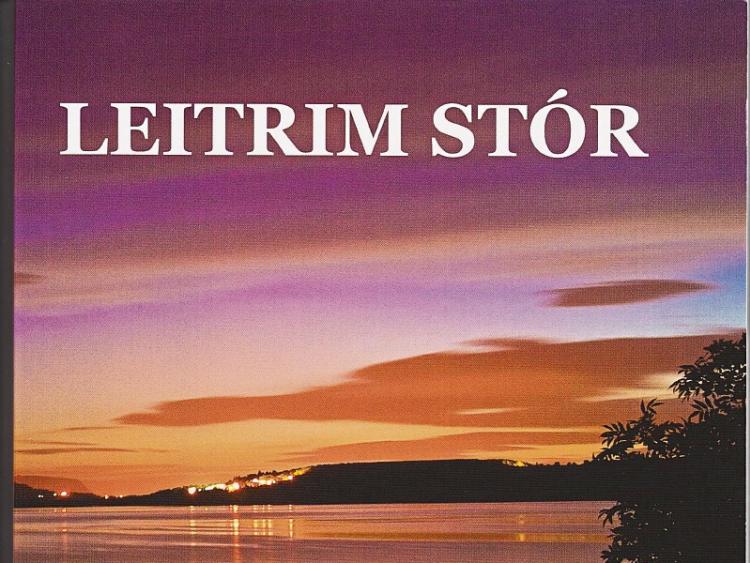 It is a great honour and privilege for me to have been invited to review “Leitrim Stór”, a remarkable new book published by the Sliabh an Iarainn Project Committee, which has already given us four wonderful books recalling the story of the mountain people on Sliabh an Iarainn.

In 2013, to contribute to the national initiative for the “Year of the Gathering”, that enterprising committee published, “Leitrim Treasure”, subtitled “Generations of Historical, Social and Human Interest Stories".

Such was its popularity it was sold out within weeks of its launch, but not before arriving in many homes, not just in Leitrim, but also where Leitrim people are found in Ireland, and throughout the world.”

This new publication is extraordinary in that, within its 241 pages, over one hundred and forty inspiring stories and items of interest with three hundred photographs, captures a proud Leitrim, touching the lives of people and communities in every part of the county, from the Atlantic shores of Tullaghan to the distant borders of Cavan and Longford, beyond Newtowngore, Carrigallen and Gortletleragh.

“Leitrim Stór”, subtitled “Celebrating Leitrim” is aptly titled, for it is such an extraordinary collection of stories and articles that are so uplifting; inspiring pride and gratitude that we are fortunate to be in Leitrim, or wherever we live, we are Leitrim people.

This book is not a collection of sentimental sob stories. You will not find stories that lament the hardships of a life lived in Leitrim and the curse of emigration instead you will find a book that is a celebration and exaltation of Leitrim with heart warming stories from second and third generation Leitrim exiles; wonderful stories from several Leitrim people living in Leitrim and absorbing, historical articles relating to Leitrim and inspiring stories of so many Leitrim people who overcame adversity and prejudice to rise to the top in their careers; many, many items of interest.

In the foreword to “Leitrim Stór”, well known novelist, Michael Harding, forwards his belief that “The past is a mythic landscape. It defines our beliefs and our confidence in the present... There is a Leitrim in cyberspace where the past is the vital foundation of identity and where people get direction from the stories of their past, and the songs and love stories of other days”.

How accurate is Michael Harding’s assertions. For it was not the memories of hardship that our forefathers, in exile, brought with them. They brought with them photographic memories of every little field, of the warm hearth fire surrounded by family and neighbours, playing music, singing, telling stories (often ghost stories), and often rejoicing of the day’s work done at the meitheal. These were treasured memories they brought with them. It was as if they had grown into the land and the land grew with them.

And so we have, in this book, such exhilarating stories from their grandchildren, great grandchildren and even great, great ones with whom the reader will walk with spellbound through the pages of “Leitrim Stór”.

In “Where I come from”, such a spellbinding story, the reader will find themselves beside the author, Seán McPartlan, in a field in Drumnafaughnan, outside Drumkeeran, as he asks: “Why am I drawn to this collection of fields, which my family left over a hundred years ago, why is the land so important to me? How can this collection of bog, daub, stunted fields, whins and fences... reduce me to tears, bring laughter, make my heart beat faster, and give me a peace that I can’t access anywhere else?”

Reading the story, “I’ll take you home again Kathleen”, the reader will be longing for Kathleen Moloney, to find that grave she seeks in Cloone and when she finds it, he or she will rejoice with Kathleen as she exclaims: “I was beyond excited to feel this connection and know that my father’s family walked on the same ground.”

The reader could find themselves alongside Michael Whelan, author of “Enchantments of a Leitrim Boyhood”, and “Peek for traces of magic between the trees of the local “faery fort”, or seek out the “Crossroads of Social Life...to dance to jigs and reels in open air to the music of flutes and fiddles.” Perhaps the reader will be tempted to steal along to find the crock of gold and “magic coins” at the “Stoneman” in Glenfarne after they have read James Owen’s delightful, magical story of “Alexander and the Leprechaun.”

But we do not have to rely on stories from the exiles, which we find in this amazing book, to affirm how living in Leitrim has fostered cherished, proud memories. For the reader yoy will find heart warming stories of how so many in the book, desire to share their happy memories of growing up in Leitrim. For most of them, they were not easy times. But their fond recollections of work, comradery of neighbours, simple games and recreations, colour memories of happiness and pride in their communities.

Gus Martin in “The Ballinamore I used to know” fondly recalls “the idyllic, the sun drenched, the unforgettable memories are those of the late summer and bringing in the hay.” There are times in that story that one imagines that Gus could have lashed out of his slothful ass. But he confesses: “There were moments when I knew that this ass... loved me as much as I loved her... I’ll never forget the roads we travelled together.”

We can share the magic memories and moments, years of happiness that take us into so many towns, villages, parishes and communities throughout the length and breadth of Leitrim. Perhaps in their dreams readers may find themselves jiving with Mae Morris in Fenaghville, or Eveline Dwyer in the Ballroom of Romance, or with Mena Hill in the Mayflower.

As one reads Andy McGovern’s “Spring”, one may see their father mowing with the scythe in Andy’s beautiful poem. Perhaps, too, after reading Colin Regan’s inspiring story, “It’s Part of Me”, you too can realise “To be yourself in a world, that is constantly trying to make you something else, is the greatest accomplishment.”

There are most interesting and absorbing articles about so many historical happenings in Leitrim and the phenomenal achievements of so many Leitrim people, at home and abroad, who overcome prejudice and adversity to rise to the top of their chosen careers. Their stories will make you proud. There are so many excellent articles, to go into them, it would require another book. However, one cannot feel how inspired this reader was by the resilience and courage and determination of Bridget Cannon in the story “Orphans for Australia”, by Neisha Wratten.

Yes, Leitrim produced many famous people, many heroes sung and unsung. In his story, “A Kilty hero”, Frank Cox stood beside the monument of Sean McDermott, Leitrim’s greatest hero. However, it was watching a passing funeral that Frank was moved to write of another Kilty Hero with the moving words: “Larry’s name is forever on the hearts of those who loved him. His monument is the family he nurtured and friends whose lives he touched.”

Leitrim’s history would not be complete without writing of the G.A.A. Another great Leitrim hero, Packie McGarty will live for posterity. His marking opponent Jack Mahon, a Galway Great, felt compelled to write about Packie. Fortunately his article is in “Leitrim Stór”. Leitrim has won few honours. However, the spirit of Leitrim players, officials and supporters down through the decades, is the envy of many more successful counties.

They fail to understand that it is the love and pride in Leitrim that motivates a whole county. Read the wonderful articles by Eugene McGee, David Walsh and Colin Regan to capture how they see that extraordinary love for club and county that they found in Leitrim.

Of course we are proud of Leitrim; we may be accused of being biased in our feelings that Leitrim is the best place. But there is affirmation in what outsiders write of Leitrim in this book. Senga Van Hock declared, while standing on a mountain in North Leitrim, “Everything around is barren, but in the utter loneliness up here there is no hostility; it shelters you in protective peacefulness.” Another outsider, Carl Chin, in his writing “Surviving with Dignity”, states: “Throughout Leitrim, there is a respect and regard for hospitality and dignity towards strangers that would have earned the honour of the bards of old.” Anthony Lewis, of The New York Times, wrote, “Visitors from more high powered countries think they have found that elusive thing – the simple life.” In the story, “A Yank in Leitrim” the writer found “that calm, peaceful, contented look that spoke the simple life, the heart of grace, the mind of a child like purity”. David Walsh, a reporter with the Leitrim Observer for two years, marvels, “I’ve never met people as nice, no matter where I’ve been subsequently; just a great time in my life.” Is it any wonder then that Sean McPartlan, born in Scotland, whose Grandfather emigrated from Leitrim, more than one hundred years ago, should feel compelled to conclude in his story, “Its where I come from”, “In Leitrim neighbours remain neighbours, even if there is an ocean between their houses.”

There is so much more that one could write about this amazing book that encompasses all that is so wonderful about Leitrim, and in Leitrim. I hope that, in my own limited way, I have conveyed the proud and joyful feelings and emotions that one can grasp of the spirit, generosity and proud values that radiate from the pages of “Leitrim Stór.” Having read it, you too will conclude, like Tommie Moran in “Pride of Place” that “The Leitrim Corner in heaven will surely be filled with ceol and craic” and, like Tommie, assert “Leitrim is really about people: Don’t let it change.”

What an extraordinary treasure is “Leitrim Stór”! Having found its way into every Leitrim home, everywhere in the world, generations after generations will know their rich heritage that is Leitrim and its people. “Leitrim Stór will be stored in the hearts; a precious gift.”