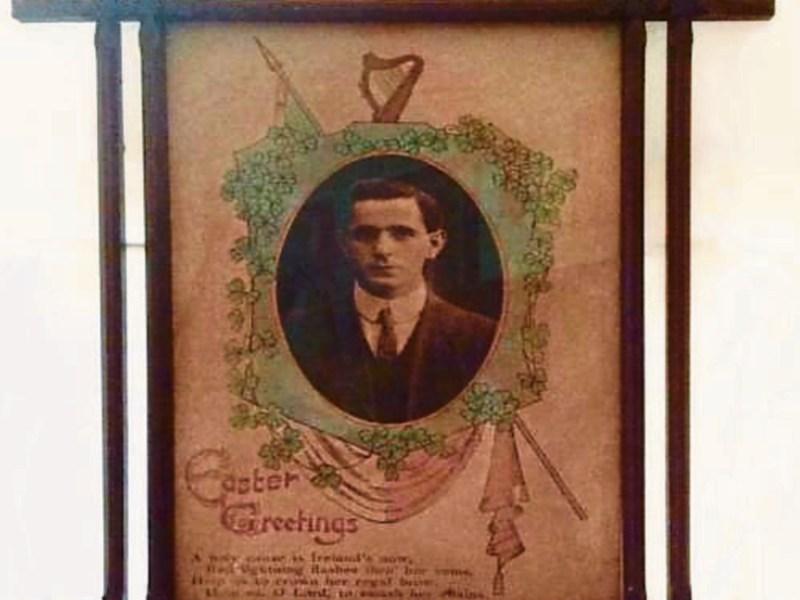 A unique 1917 print of Seán MacDiarmada, which has been fully restored, has recently presented to the people of Kiltyclogher.

Elaborating on the details of this historic print of the 1916 patriot, as well as some of the story behind it, Kiltyclogher Heritage Centre’s Paul Gibson states “a 99 year old antique print, commemorating 1916 Easter Rising leader Seán MacDiarmada, was recently presented to the people of Kiltyclogher by Hugh Feeney and his partner Mary MacIntyre.

“They’d bought it in an auction house in Dublin and decided that it belonged in Kiltyclogher. A newspaper dated January 17, 1917 is attached to the back of the print which is enclosed in a hand made frame.”

“The picture needed a little restoration work and so Jane stepped in. Aside from being a talented children’s illustrator Jane also has worked for prestigious J. Pocker Framing in New York and restored frames for works by Rembrandt, Chagall among others.

“The problem was that Jane didn’t have the necessary archival framing materials to restore the print. She contacted her former employer Robyn Pocker who generously donated the needed materials and paid for their shipment to Ireland.”

Gibson added “the framed print hangs in Kiltyclogher Heritage Centre and has excited a lot of interest and admiration from visitors. He also said “we’re delighted to have received this wonderful gift from Hugh and Mary.

“We’re also extremely grateful to Robyn Pocker for her generosity and appreciate what she and Jane have done to preserve this precious shard of history for future generations.”