LIVE BLOG: Follow all the action at the Leitrim GAA County Finals with the Leitrim Observer 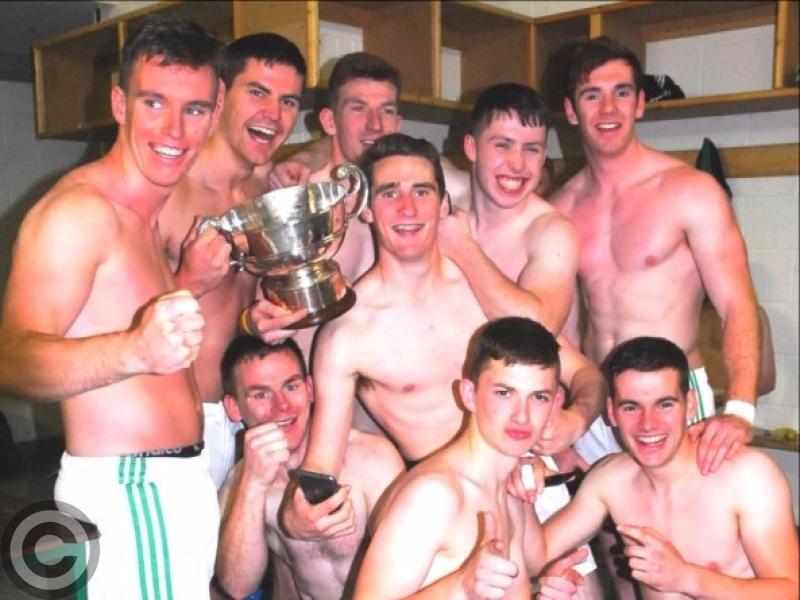 Mohill's players celebrate with the Fenagh Cup last year - who will be celebrating this Sunday evening? 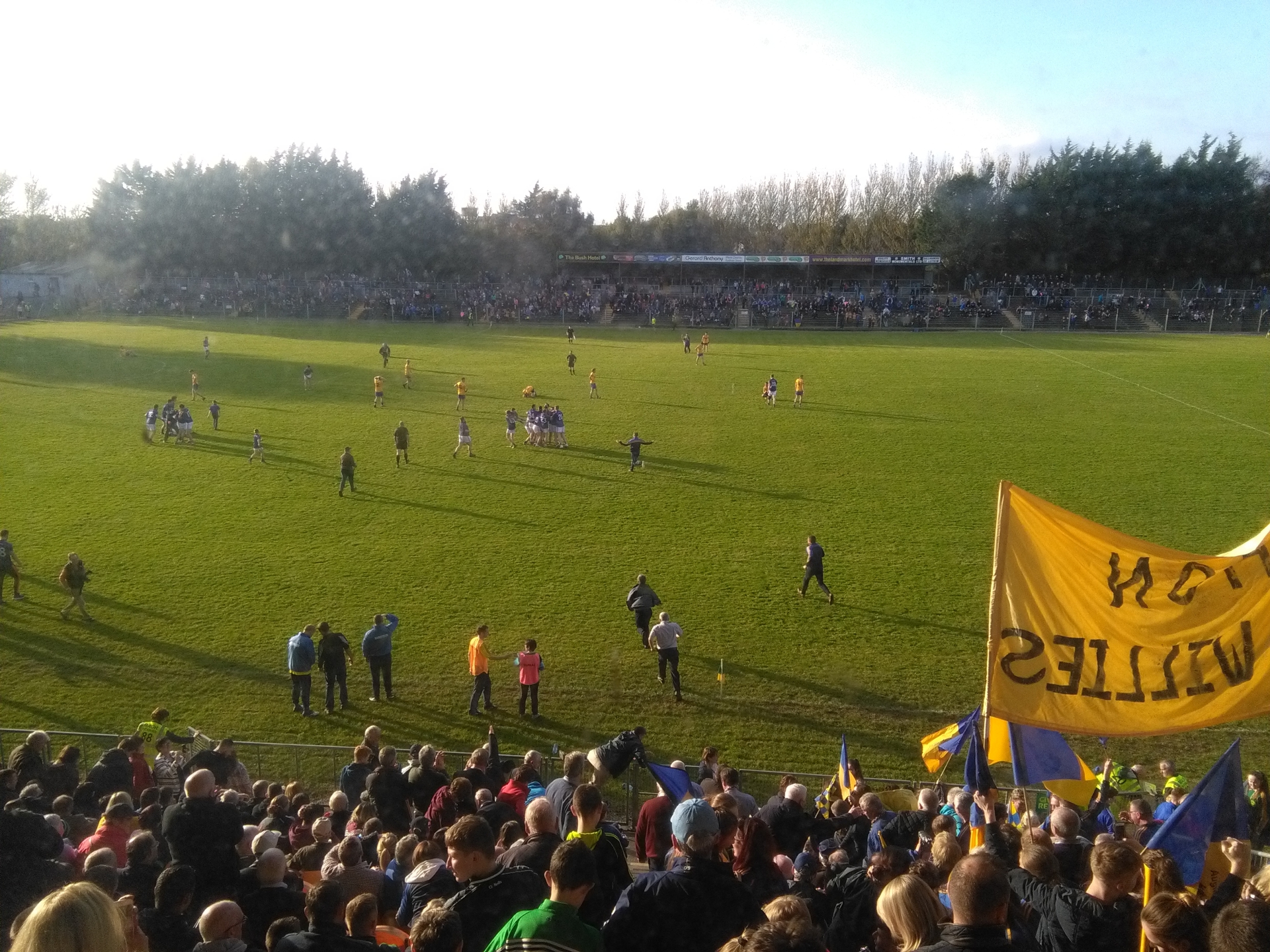 17.15: There will be three minutes of injury time at the end of the game - the sides are currently level.

17.11: Incredible point from James Glancy brings the Glencar/Manor crowd to life and a huge reaction from the mentors on the sideline. 1-9 to 0-12 three minutes to go.

17.08: Conor Dolan with another free after a foul on Ronan Flynn means there is just a point between the sides with six minutes remaining - 1-9 to 0-11.

17.04: There's just a goal between the sides after Conor Dolan converts a free for Glencar/Manor - 1-9 to 0-9. 10 minutes plus injury time remaining

16.57: Darren Sweeney becomes the latest sub to make an immediate impression with a good point after Shane Loughlin's pass - 1-9 to 0-8.

16.54: Subs: Darren Sweeney replaces Thomas Coyle on the Glencar/Manor side.

16.54: Gary Plunkett with another Aughawillan point - they now lead by six points.

16.51: Glencar/Manor sub Adrian Croal points with his first involvement in the final and moments later at the other end Morgan Quinn is denied by a combination of Gary Hickey and the crossbar.

16.48: Stephen Gilheany points with his first involvement seconds after being introduced - 1-7 to 0-5

16.33: With the final action of the first half Conor Dolan converted a free to bring Glencar/Manor to within four points - 1-6 to 0-5.

16.31: Pierce Dolan with a fine point has extended the Aughawillan lead in the final minute of the half. One minute of injury time to be played.

16.27: An immediate reply from Glencar/Manor with Conor Dolan converting a free.

16.20: Sean Quinn with an expertly floated pointed has extended Aughawillan's lead although Glencar/Manorhamilton are beginning to have more of a say on proceedings. Aughawillan 1-3, Glencar/Manor 0-2

16.15: Conor Dolan with his second pointed free of the afternoon reduces the deficit - Aughawillan 1-2, Glencar/Manorhamilton 0-2

16.03: Mark Plunkett adds a point to Aughawillan's tally as they lead by 1-2 to no score

16.03: GOAL: Morgan Quinn has helped given Aughawillan the dream start with a goal inside the opening minute.

16.02: Sean Flanagan opens the scoring with a point for Aughawillan inside the opening minute. 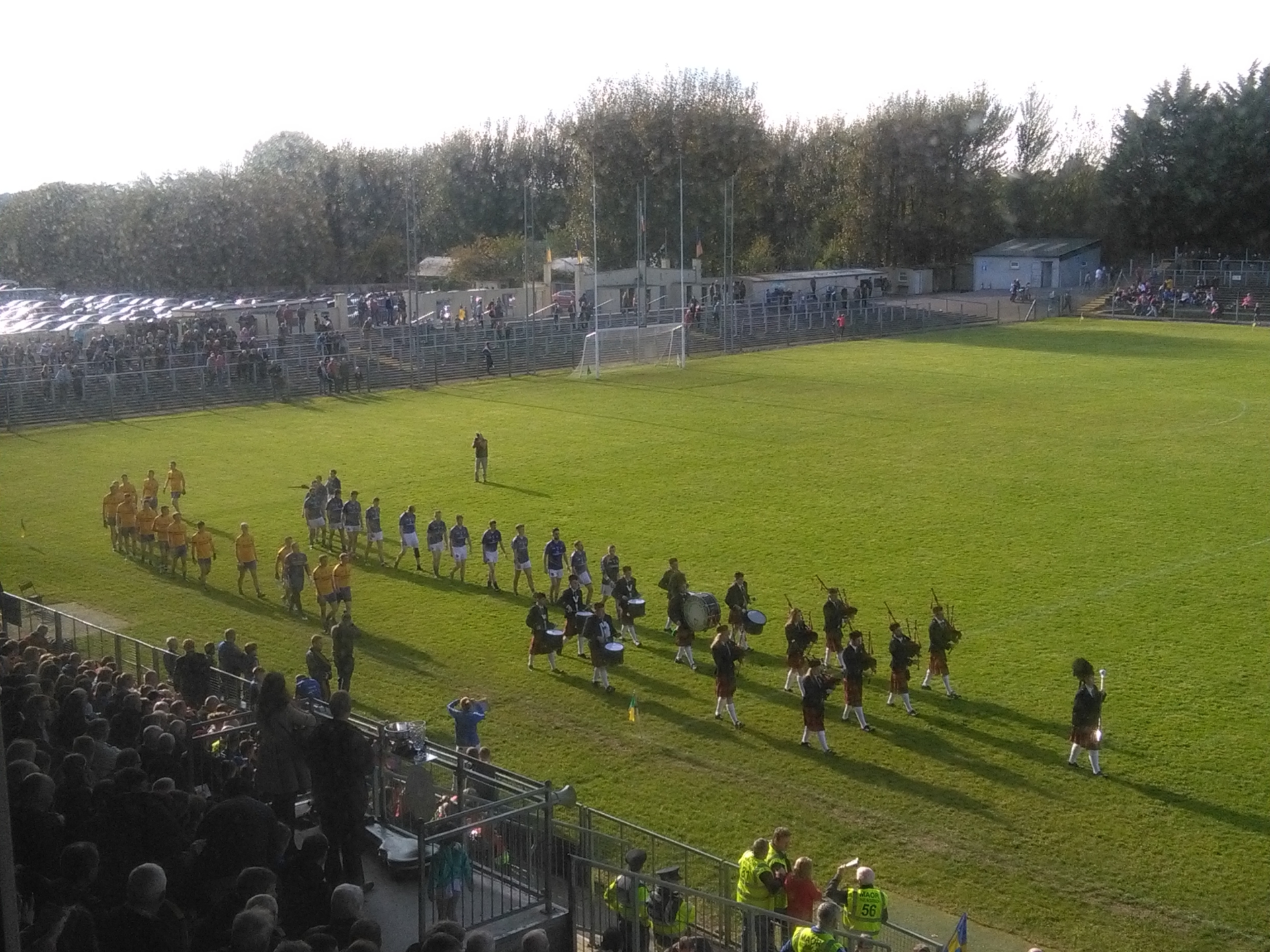 15.56: Players are marching behing the Kiltubrid pipe band. Throw-in to the Leitrim Senior Football Championship Final is just minutes away.

15.50: Ten minutes to go and no changes on the Glencar/Manorhamilton team-sheet. Lots of number changes and switches on the Aughawillan team - more details to come. 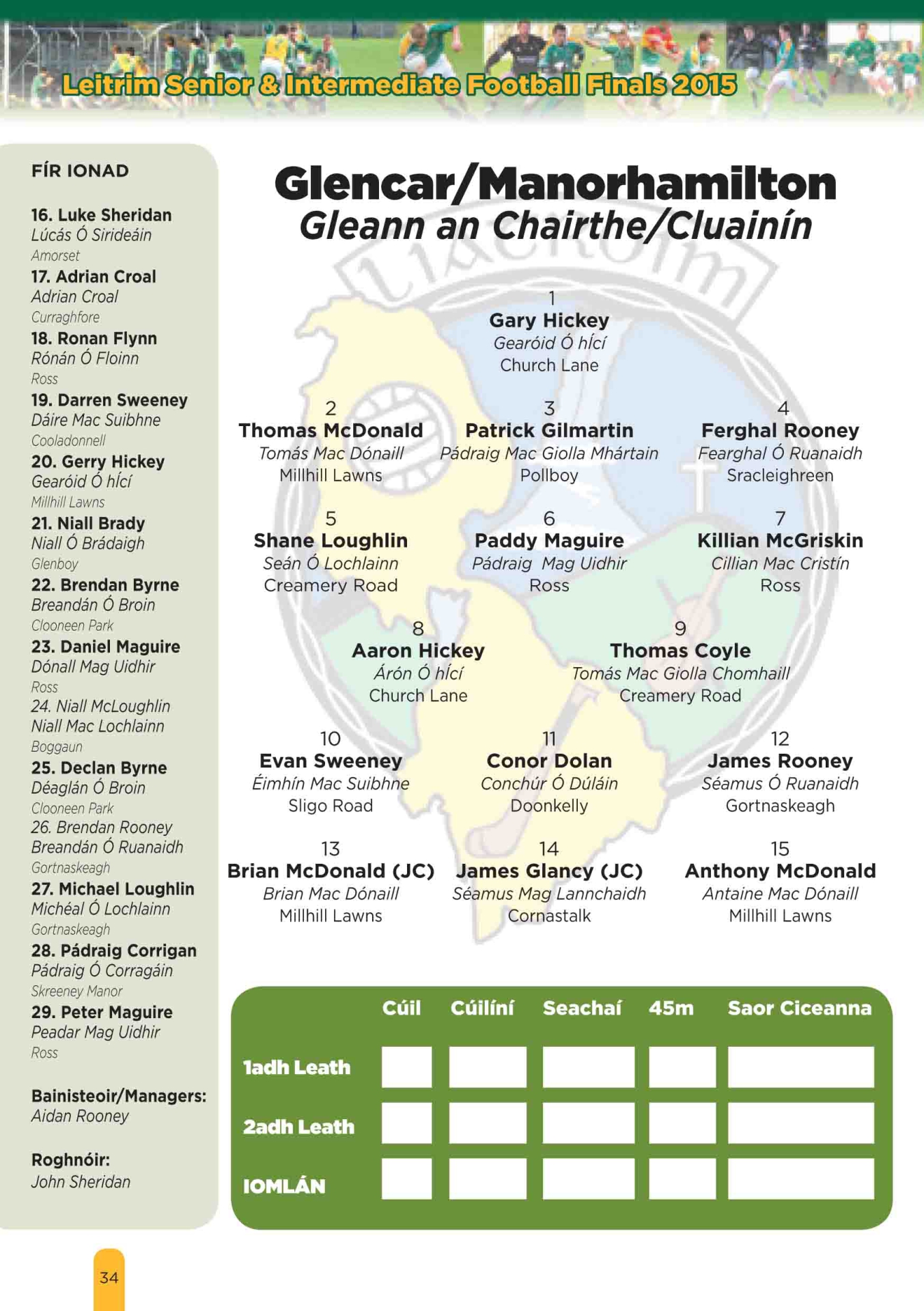 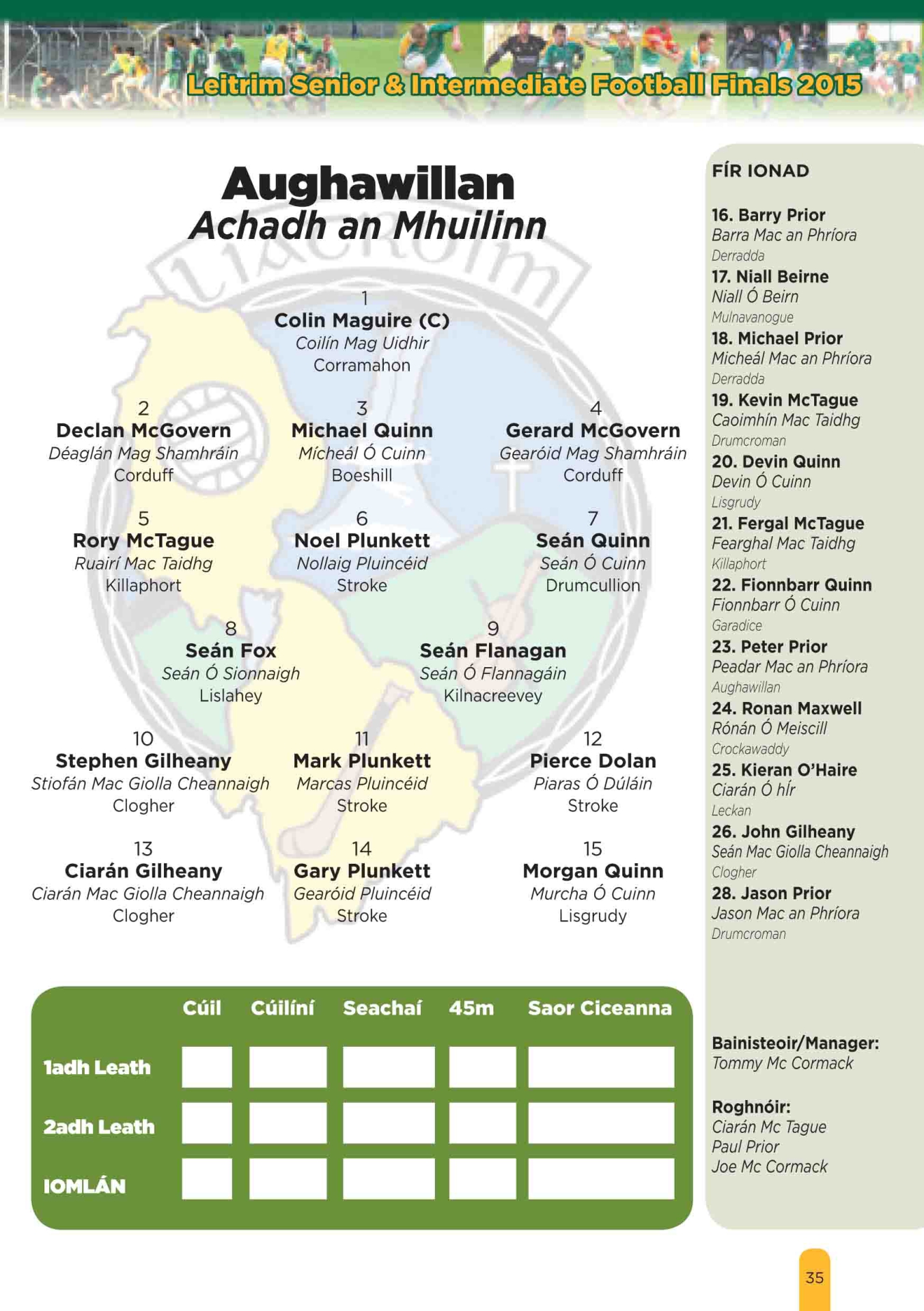 15.24: Dean McGovern of Ballinamore Sean O'Heslin's is Intermediate Final Man of the Match

15.19: It's all over and Ballinamore Sean O'Heslin's are the 2016 Fox's Monumentals Intermediate Champions, winning 0-13 to 2-6. Heartbreak for Drumkeerin who came so close to a famous upset victory

15.18: Mark McGrory pops over a huge point after Ballinamore win the kickout

15.17: Brian Leyden shoots wide for Ballinamore - is that it?

15.16: Oisin McCaffrey is just wide with a long range effort

15.14: As we tick into added time, Wayne McKeon puts a free wide

15.06: Johnny McWeeney hits a poor wide for Ballinamore, James McWeeney soon to come on while Declan Daly will join the fray for Drumkeerin

15.05: Shane McWeeney puts a free wide for a nervous Ballinamore

15.02: Seamus McNama with a wide for Drumkeerin who still trail by a point

14.55: GOAL for Drumkeerin - Seamus McNama fists the ball across the Ballinamore goal and James Gallagher (Creevelea) arrives in like a train, rounds the keeper and blasts to the net, 2-5 to 0-11

14.48: Concern for Drumkeerin as Tommy Rogan hits his head off his own team-mate

14.47: Wayne McKeon puts O'Heslin's back in front from a free

14.45: Drumkeerin open the second half scoring with a wonderful point from James Gallagher (Corry) in the corner

14.44: No changes on either team as the second half gets underway

14.30: Drumkeerin keeper Kevin Forde denies Niall McGovern a certain goal with a brilliant save but Liam Ferguson pops over a point to put Sean O'Heslin's in front.

14.28: One minute of added time as Wayne McKeon waits to take a close range free for Ballinamore. Over it goes and we're level

14.27: Two quick points for Dean McGovern and Donal Feely cut the gap to a point.

14.25: Wayne McKeon replies with a free for Ballinamore

14.24: Jamie Langan sweeps over another point as Drumkeerin are now four ahead

14.22: Bad wide from Aidan Dolan as Drumkeerin are dominating.

14.19: Jamie Langan puts over a free to put Drumkeerin two up

14.17: Cathal McCauley converts a free to put Drumkeerin back in front.

14.13: Shane McWeeney cuts in along the left endline to fist the ball over the bar, we're level

14.12: Peter Reynolds puts the ball over the bar for Ballinamore, gap down to one point.

14.10: Great pressure from Drumkeerin forces a wide from David Duignan

14.00: GOAL for Drumkeerin - just 20 seconds on the clock and Daragh Flynn charges through to fire the ball to the Ballinamore net 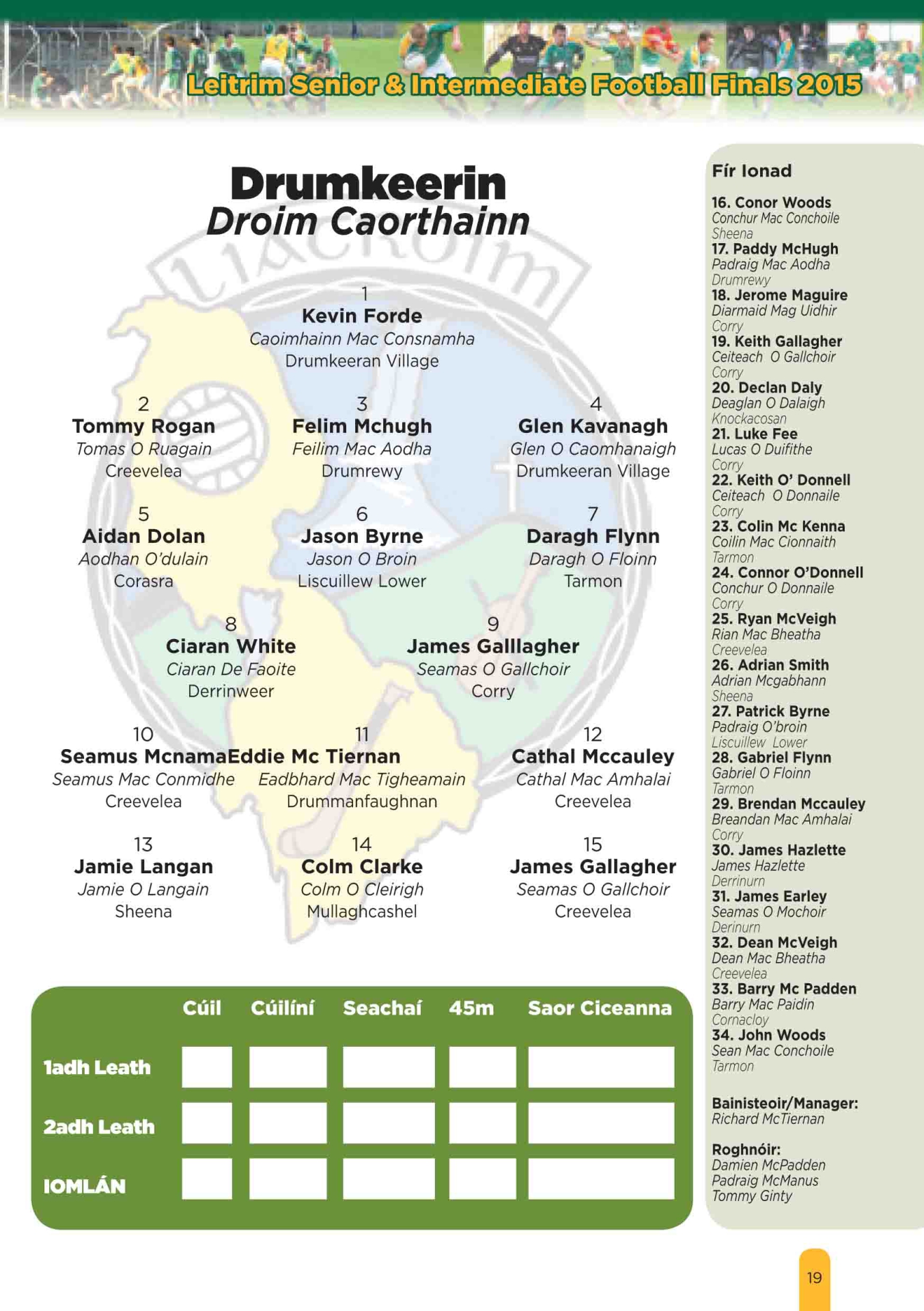 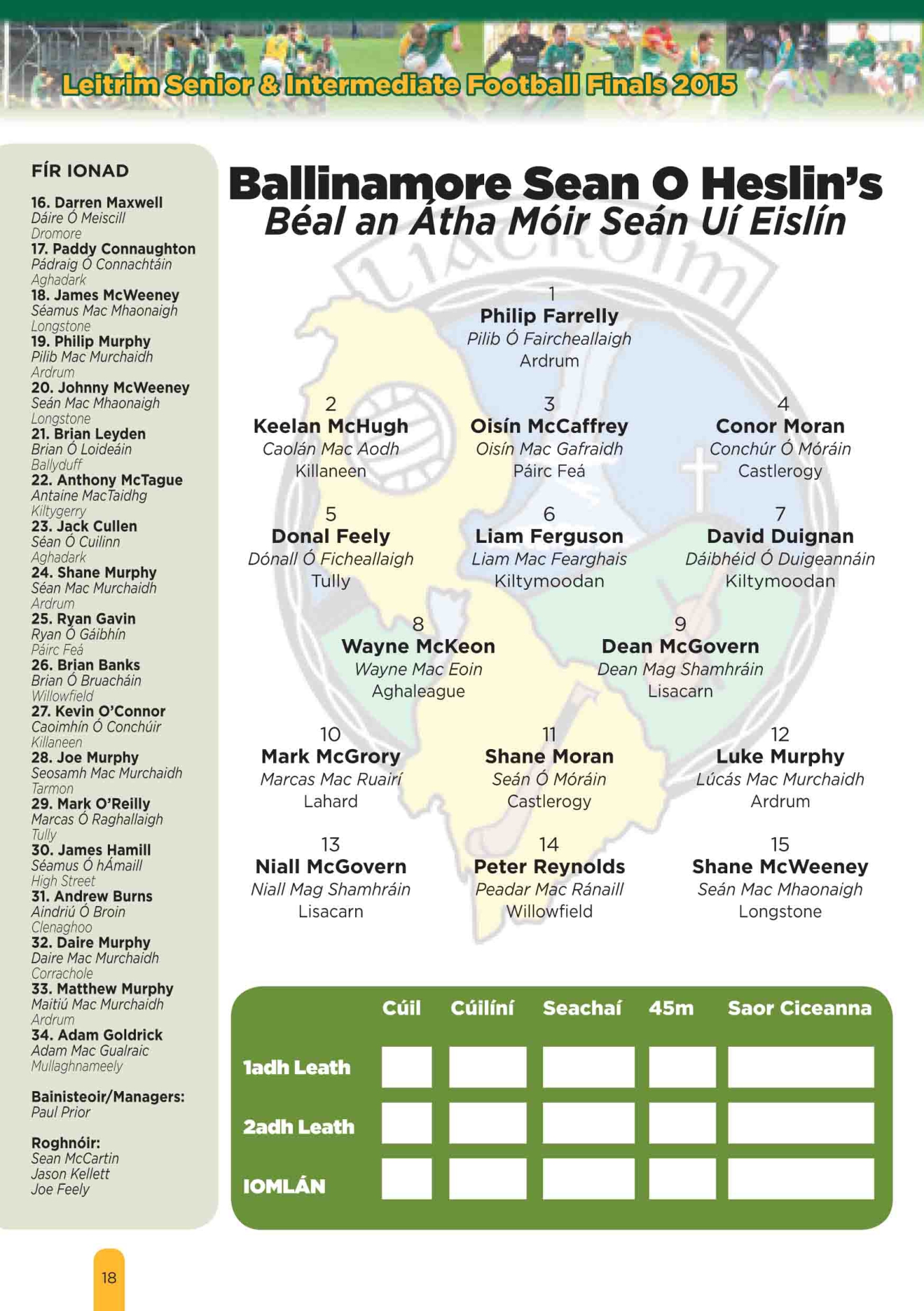 1.16: The sides will have to meet again after an entertaining final finishes level - St Manachan's 2-11, Melvin Gaels 1-14

1.15: Darragh Rooney stands over a free from an incredibly tough angle but it is claimed on the line by a Mohill defender.

1.13: Evan Harkin with an excellent point deep in injury time to level matters.

1.09: Another excellent point from Darragh Rooney has given Melvin Gaels a one point lead as the board goes up to indicate one minute of injury time. 1-14 to 2-10

1.04: Eoghan Keegan with an excellent free has levelled matters once more.

1.01: The lead didn't last long as Ryan Murphy replied immediately with a point for St Manachan's.

1.01: Brilliant point from DArragh Rooney after a fine ball from Leo Ryan and Melvin Gaels lead for the first time.

12.57: Another Darragh Rooney has levelled matters and Melvin Gaels could have gone in front seconds later but Cillian McGloin saw an effort go wide. 1-11 to 2-8

12.47: Moment of controversy as Ethan Harkin's shot which looked good and was signalled as a point by the umpire has been waved wide by the referee after advice from his linseman

12.43: Two points in quick succession from Jordan Reynolds, one free, have given St Manachan's a great start to the second half.

12.41: The second half is underway, no changes on either side.

12.29: The half time whistle has sounded. St Manachan's finished the first half strongly and enjoy a 2-6 to 1-6 lead over Melvin Gaels at the interval.

12.28: Fiachra McGuinnes scores another point as the game enters injury time to give his side a three point cushion.

12.25: Another Fiachra McGuinness point puts St Manachan's two points clear. One minute additional time has been signalled for the end of the first half.

12.20: GOAL: Darragh Rooney capitalises on an excellent pass from Declan Clancy and fires to the net. St Manachan's 2-3, Melvin Gaels 1-5

12.09: GOAL: Jordan Reynolds got to dangerous delivery ahead of Melvin Gaels goalkeeper Eoin Gallagher to divert the ball to the net. St Manachan's 1-3, Melvin Gaels 0-1. Blood sub has been reversed.

12.00: Fast start for Mohill with points from Ryan Murphy and Jordan Reynolds (free)

11.55: The teams start the Leitrim Minor Championship Final as selected: 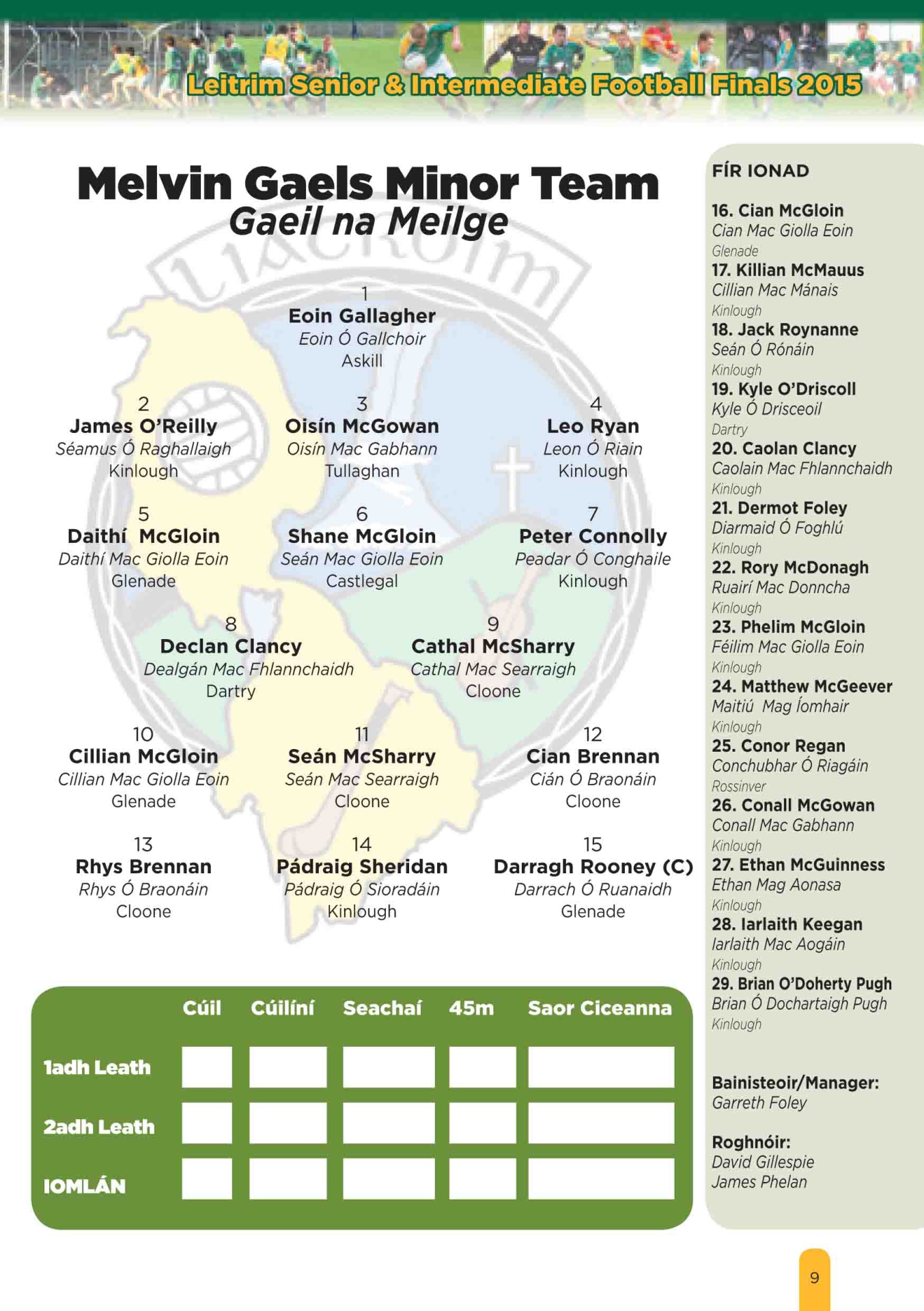 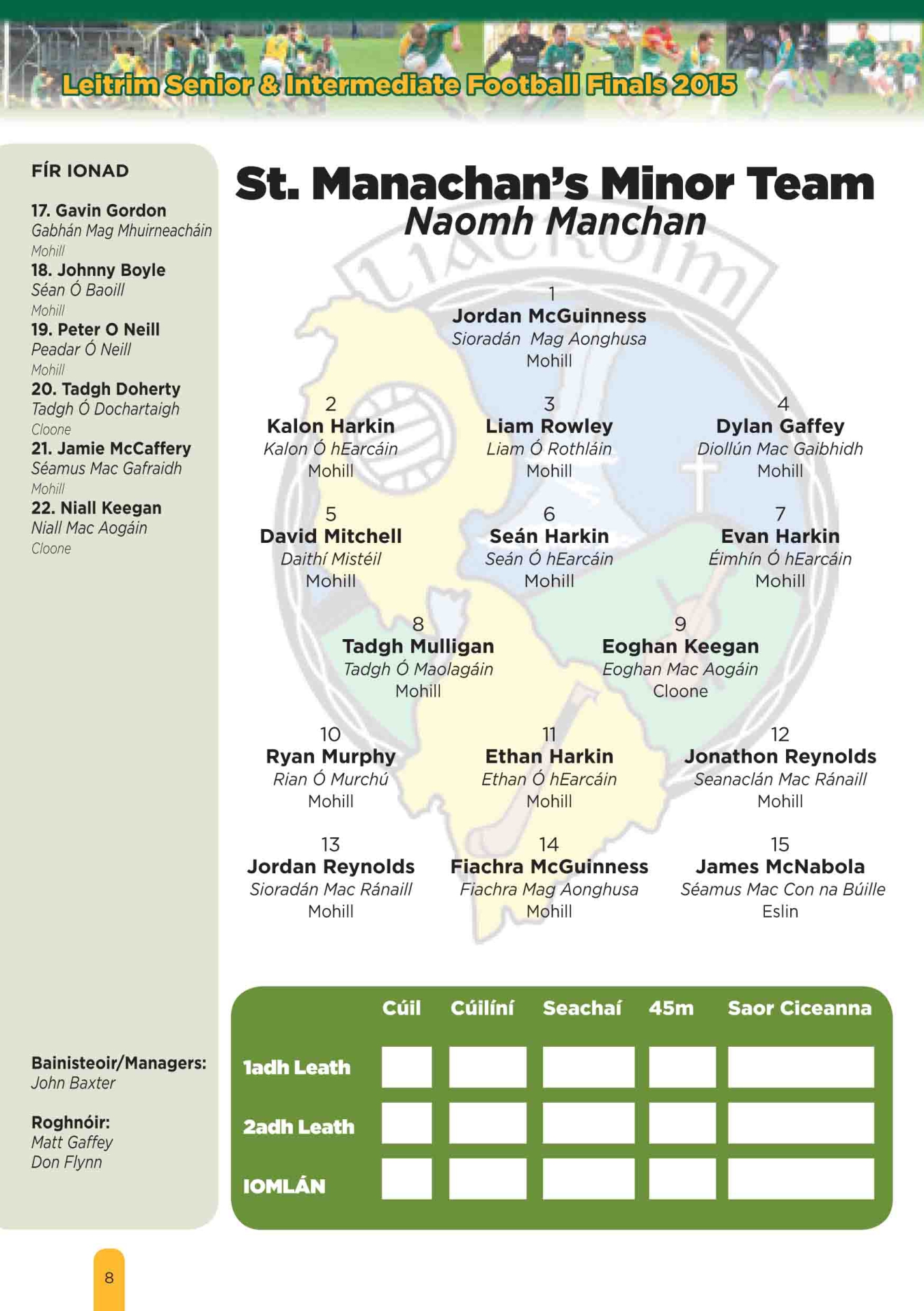 Decision day is here with the Leitrim GAA Senior, Intermediate and Minor Championship Finals all down for decision in Pairc Sean Mac Diarmada today (Sunday, October 9).

And you can follow all the action right here with the Leitrim Observer Live Blog from Pairc Sean Mac Diarmada, covering all the action from the Connacht Gold Senior, Fox's Monumentals Intermediate and Minor Championship Finals.

The action gets underway with the Minor A Final meeting of Melvin Gaels and St. Manchan's at 12 noon followed by the clash of Ballinamore Sean O'Heslin's and Drumkeerin in the Intermediate Final at 2.00.

And closing the day will be the highly anticipated meeting of Aughawillan and Glencar/Manorhamilton in the showpiece of the Leitrim GAA club calendar, the throw-in at 4 pm.