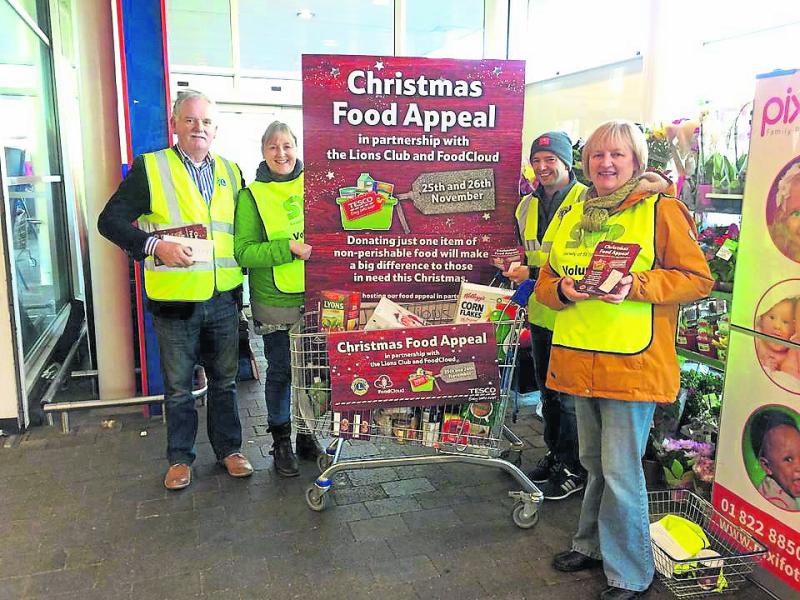 Tesco Ireland’s annual two day food appeal held in Tesco Ballinamore and Carrick on Shannon stores in partnership with the Lions Club and FoodCloud collected over €3,700 for families in need.

Over €170,000 worth of food donations was collected by the Lions Club and FoodCloud volunteers during the nationwide appeal at Tesco stores. An estimated 700 trolleys jam-packed with food were donated in just two days nationwide. This year’s appeal has been the most successful yet with a 70% increase in the level of food donated by Tesco shoppers, which raised €100,000 in 2015.

Taking place on Friday 25th and Saturday 26th November, shoppers dug deep and donated thousands of non-perishable food items. All food collected during the appeal in Tesco stores will be sorted by Lions Club and FoodCloud volunteers and used to create food hampers for people in local communities across Ireland that are struggling to provide for themselves or their families.

Joe Smith, Lions Club Food Appeal Coordinator described the public response as most generous response yet. “We are thrilled that the two day appeal proved to be such an outstanding success. Every food item will go to those who truly need it this Christmas and I would like to thank the hundreds of volunteers, Tesco stores and customers for their support.”

All food collected during the appeal in Tesco stores will be sorted by volunteers from FoodCloud and the 115 Lions Clubs spread throughout the country, who will redistribute food parcels to those who need them most. A number of charitable organisations will benefit from this year’s food appeal including St. Vincent de Paul and Friends of the Elderly to mention a few.