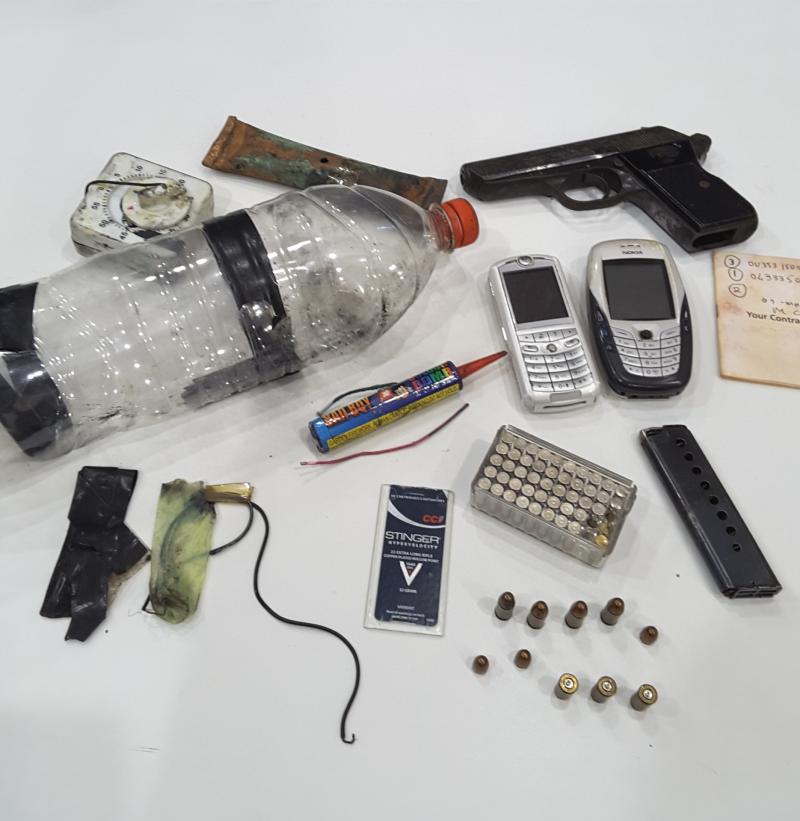 The explosives and phones for which Billings was charged with. The firearm was discovered in a follow up search.

A man who put an incendiary bomb on a Dublin-bound passenger bus and made bomb threats made during the State visit of Queen Elizabeth five years ago has been jailed for eight and a half years.

Donal Billings (66), with an address at St Bridget’s Court, Drumlish, County Longford, was found guilty last month by the three judge, non-jury Special Criminal Court of the unlawful possession of an explosive substance at Longford railway station car park on May 16th, 2011.

He was further found guilty of four offences under the Criminal Law Act of 1976 of knowingly making false reports tending to show that an offence had been committed.

Billings was convicted of making a false report within the State on May 16th, 2011, that bombs had been placed at Busáras in Dublin and at Sinn Féin's headquarters.

The trial, which lasted two weeks, was heard in both English and Irish, after Billings had invoked his right to be tried in the Irish language.

On the eve of and during the State visit of Queen Elizabeth five years ago, Billings called Longford garda station three times, threatening bombs on a Dublin-bound passenger bus, in Busaras and Sinn Fein's HQ, mortars at Dublin castle while the Queen was dining there and bombs at Cork airport, when she was due to fly out from the country.

A Corduff travel bus was stopped in Maynooth and searched by gardai, who found a suspicious object in the luggage compartment.

The device was a combination of gunpowder and a two-litre bottle containing petrol.

At this morning's sentence hearing, Mr Justice Tony Hunt, presiding, said that Billings had placed a highly dangerous explosive on a public transport vehicle containing an innocent driver and many passengers.

This was a "highly irresponsible and dangerous act", the judge said, which "recklessly exposed passengers, staff and members of the emergency services to very significant risk of serious injury or death".

Speaking after the sentencing outside the Criminal Courts of Justice, Detective Inspector Pat Finlay said, "This investigation highlights the challenges garda siochana are facing, particularly in relation to this one individual capable and intent on causing disruption to a State visit."

Keep a check on www.leitrimobserver.ie for more on this story.