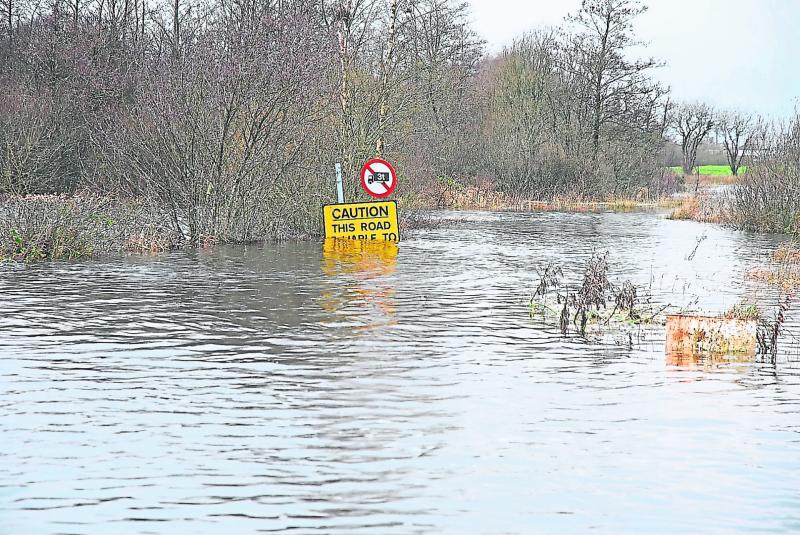 The year began with the news that Co Leitrim bucked a national trend as house prices were said to have increased by 13% between October and December 2015 compared to the national average of an increase of 8.5%. The average house price in the final quarter of 2015 was €104,256, while the national average was €204,000.
The floods that hit the county in December 2015 continued to cause problems in January with growing concern over contaminated flood waters. The HSE and Leitrim County Council issued warnings to the public in relation to the potential dangers as flood waters continued to affect the county with Carrick-on-Shannon and Leitrim Village the worst affected.
The race to catch the first salmon of the year once again brought many anglers to the River Drowes but the high water levels were once again proving problematic. Shane Gallagher, fisheries owner on the Drowes said the water levels hampered conditions for both the salmon and the anglers.
There was a good news story in Carrick-on-Shannon as one of the first babies born in 2016 made a quick journey into the world and was delivered in his own home in Carrick-on-Shannon. Thomas Poór was born at 6.33am on Saturday, January 2 having been delivered by his father Zoltán who had to act as a midwife when his wife Judit wen tinto labour. Thomas was happy to report that mother and baby were “perfect and healthy.”
The January meeting of Leitrim Council was dominated by the flooding that had been experienced in the county with Senior Engineer Shay O'Connor telling the chamber that the flooding had cost the Council in excess of €771,000.
Warm tributes were paid to former councillor, the late Tony Ferguson by his Council colleagues. Cllr Justin Warnock said, “Leitrim has lost one of life's true gentlemen.”
The campaign for a new community hospital in Carrick-on-Shannon and the restoration of nurse led services escalated to become an election issue. The friends of St Patrick's Hospital said they had become “very disillusioned by the lack of progress made and by the ambiguity and the lack of clarity” from the Department of Health and the HSE.
With the general election ebbing ever closer it was announced that Cllr Paddy O'Rourke would be on the ticket as a Fianna Fail candidate while independent Councillor Des Guckian and business woman Bernie O'Hara also put her names forward. Other Leitrim candidates to contest the election were Martin Kenny (SF), Leslie O'Hora (GP) and Gerry Reynolds (FG).
The month ended with the news that a tragedy had been averted when Leitrim U-21 footballer Alan McTigue from Drumshanbo was transported from Rathcline, Co Longford to University College Hospital, Galway after he collapsed during the Hastings Cup U-21 match between Leitrim and Roscommon. A defibrillator was used twice on the field to save his life and he was subsequently transported to Galway by an Irish Air Corps ambulance. Alan's family thanked all those who came to his rescue. Those sentiments were echoed by Leitrim County Board Chairman Terence Boyle who also stressed the importance of having a defibrillator and personnel who are properly trained in how to use it.
There was much better news from Drumshanbo in January as an Ireland title made it's way to the Vocational School. Having made their way to the Cadette A Final without dropping a set, Drumshanbo VS continued their excellent form in the final as they outclassed a shocked St Brigid's of Loughrea, emerging victorious on a scoreline of 25-19, 25-18. Paying tribute to his players coach Aidan Shannon said, “We were only in fourth gear, we still had another gear to go. ”