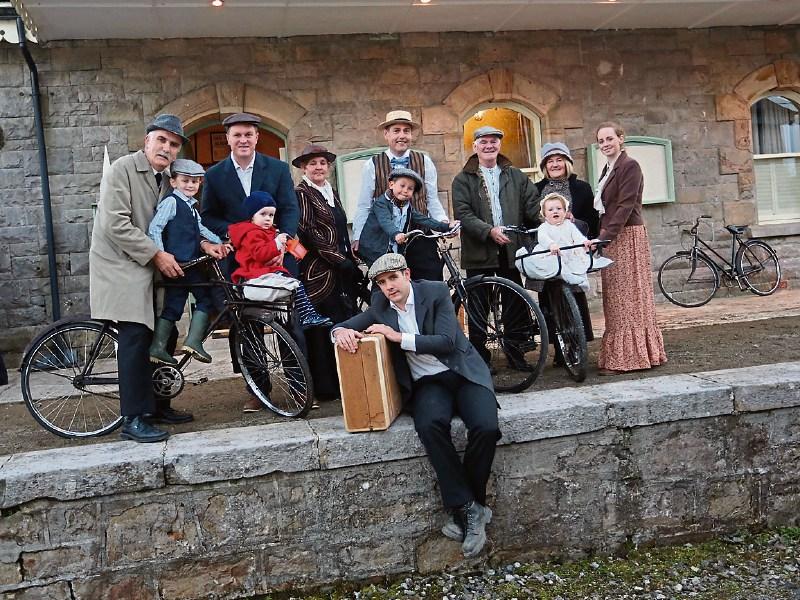 A recreation of MacDiarmada's last journey from Glenfarne Station as part of Leitrim's 1916 centenary celebrations. Photo by Liam Malaniff.

President Michael D. Higgins opened the month by apologising to the Gralton family for the “abuse of the law” which led to the deportation of Jimmy Gralton in 1933.

The President of Ireland addressed the crowd at Effrinagh for the unveiling of a memorial to Jimmy Gralton.

In an unprecedented speech, President Higgins said “Jimmy Gralton’s treatment at the hands of the Irish State and its agencies was wrong and indefensible. As a Head of State, I acknowledge that the State’s authority was abused under undemocratic pressure.”

Leitrim councillors took on a national issue this month when they debated a motion calling for the council “to stand opposed to any attempts to water down the 8th Amendment to the Constitution and thereby open the door to abortion on demand in Ireland.”

It sparked a heated debate inside the chamber while a small group of abortion rights campaigners picketed the council prior to the meeting. The motions proposed by Independent Cllr Des Guckian was passed by two votes with six councillors opting to abstain.

There continued to be calls this month from political representatives to have the Shannon dredged.

Leitrim GAA Senior Team announced their new management team as Brendan Guckian, John O’Mahony and Michael Moyles. The County board asked for all the clubs in Leitrim to unite behind the new management.

The proposal to introduce by-laws which prohibit consumption of alcohol in public places in Carrick-on-Shannon was first debated in mid September.

At the JPC meeting Superintendent Kevin English said there were “serious policing issues it be addressed” and there is “significant issues with public order” in the county town.

A serious road traffic accident close to Ballinamore left two men seriously injured on September 17. One of the young man who was in the car accident died later on this year.

The issue over An Post moving the Post Office in Ballinamore to another location in the town resulted in a local protest.

At the end of September three companies based in Carrick-on-Shannon went on a trade mission to America to highlight Ireland as a key hub for innovative life sciences solutions. Prior PLM Medical, Vistamed and Cora Systems made the trip.

And Dromod won it's 37th tidy towns title in a row. It was just five marks behind the overall SuperValu National Tidy Towns winner, Skerries in Dublin. Dromod and Carrick-on-Shannon also both won gold Medals, securing €900 each.