A year in review in Leitrim - March 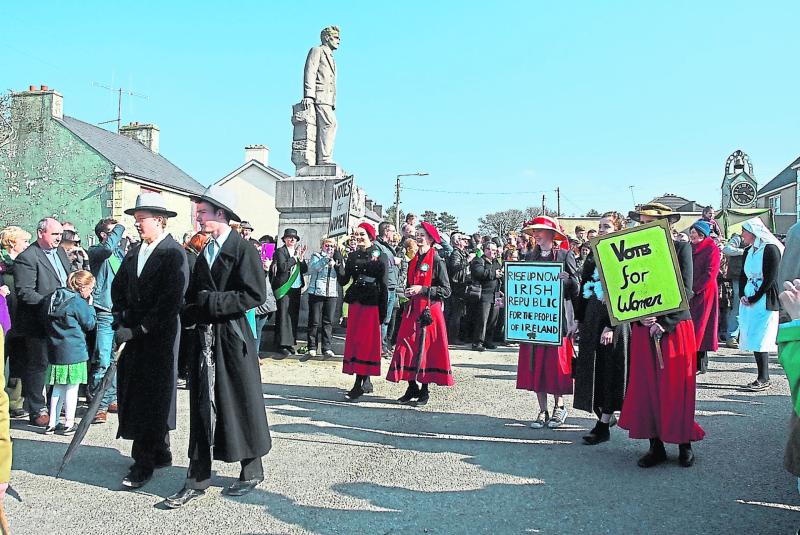 A group of suffragettes pass by the Sean MacDiarmada monument on St Patrick's Day in Kiltyclogher.

The first paper in March carried a picture of newly elected TD Martin Kenny alongside family and friends following his election to the 32nd Dáil on the front page. It had been hoped locally the newly formed constituency would help elect more than one Leitrim TD but in the end Deputy Kenny was the only Leitrim candidate to be returned. Also elected were Fianna Fáil's Marc MacSharry, who topped the poll, Eamon Scanlon and Fine Gael's Tony McLoughlin. The hopes of Gerry Reynolds were dashed with the transfer of Marc McSharry's surplus in the 15th count proving to be enough to elect his party colleague Eamon Scanlon, with Reynolds missing out by just 400 votes.
The proprietor of The Bush Hotel, Carrick-on-Shannon, Joe Dolan, was elected as the new President of the Irish Hotel Federation. Upon his election Joe said, “Given the right support Irish tourism has the capacity to create to generate a further 40,000 additional new jobs over the next five years.”
March also saw Judge Geoffrey Browne bid farewell to Strokestown District Court. Judge Browne previously presided over District Court sittings in Carrick-on-Shannon. Bidding a fond farewell to the Court Judge Browne thanked members of An Garda Siochana, the probation services, court staff and local solicitors. Mary Rose McNulty paid tribute to Judge Browne on behalf of the local BAR Association saying, “You could tell the difference between someone who was down on their luck and someone who needed to be taught a lesson.”
The Leitrim footballers recorded their first win of their Allianz National Football League Division 4 campaign when they recorded a surprise victory over Louth in Pairc Sean MacDiarmada. Reacting to criticism his team had received prior to the game manager Shane Ward said, “I think there is probably more people criticising online than there is watching the games and enjoying their young patriots playing the game and that is a very unusual thing, a very unusual situation to be in. Suggesting a possible reason for the small attendance for the win over the 'wee county' Shane added, “Maybe Mother's Day had something to do with it.”
The unexpected closure of Cromleach Lodge left over 100 couples and 50 staff high and dry after the shock closure of the hotel. One bride to be effected by the closure, Paula Kellegher told The Leitrim Observer, “It was a total shock, I couldn't believe it. Our wedding was planned for October and we had paid more than the usual deposit. When I saw the e-mail and read it I was just numb. There was no mention of what we should do or what would happen to the money we paid over in good faith. We worked so hard for that money. If it was a case that we had wasted this money on something ourselves by choice, you would say, ok, that's gone, but it is so hard to accept that you worked so hard for something and now it is just gone, through no fault of our own, and we have nothing to show for it.”
The 1916 centenary celebrations were a regular occurrence during the month of March. Here in The Leitrim Observer we also looked back on the events of 100 years ago with four special supplements looking back on life in the county and country a century ago.
St Patrick's Day in Kiltyclogher proved to be a particularly special occasion this year as huge crowds descended upon the village. The home place of Sean MacDiarmada, one of the signatories of the 1916 proclamation, held a recreation of St Patrick's Day 1916 with the village returned to how it might have looked in 1916 including market day stalls and a traditional parade in costumes of the time.