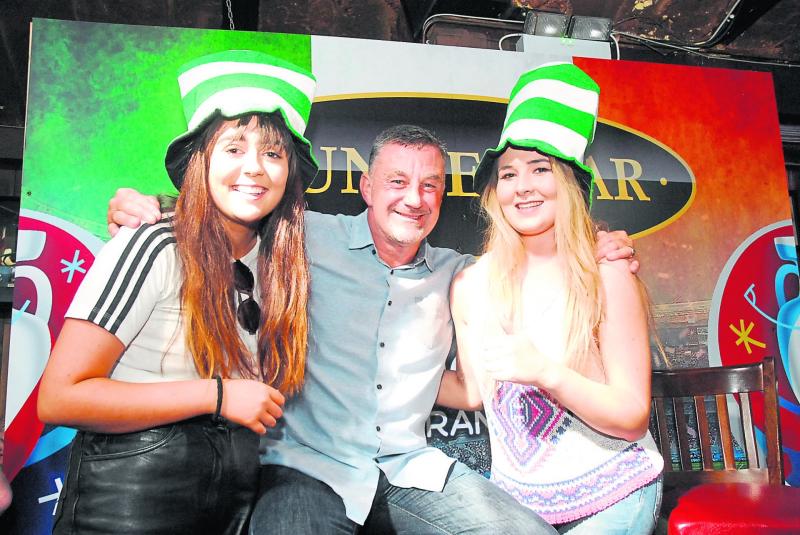 Ireland soccer legend John Aldridge was in Dunne's Bar, Carrick-on-Shannon in June to give expert analysis before and after the Republic of Ireland v Sweden match in the European Championships.

This month allegations made in the Dail by Deputy Martin Kenny into Garda malpractice in Leitrim led to a statement by the local Superintendent outlining his “full confidence” in the local Gardai. Also this month there was shock in the community as receivers closed McCormack stores in three locations. The prospect of more jobs in Carrick-on-Shannon was raised, while Leader funding was expected to be down by €2 million.
The month began in controversy with Deputy Martin Kenny's claims of alleged Garda malpractice in Leitrim, made under Dail privilege, sparking a response from local District Superintendent Kevin English who said he had full confidence in the local Gardai and he reassured all victims of crime that their concerns would be immediately addressed.
Deputy Kenny's allegations centred around gardai engaging active criminals as informants, running their own informants outside the system, and the use of informers to set up and entrap people. He also said he had serious concerns about the disappearance of Aughavas man Pat Heeran in 2011.
Also this month, a large IFA meeting in Drumshanbo heard claims that the national policy to increase forestry was unfairly targeting Leitrim. Very strong views were expressed by farmers and landowners against the increase of forestry in the county particularly by foreign investors.
Some 208 jobs and 15 business locations were closed across the region following a receivership order by Bank of Ireland against McCormack Oils.
The company's stores and Leitrim Village, Drumshanbo and Manorhamilton were all closed with immediate effect shocking staff and the public. Resident in Leitrim Village, which has no other food store or filling station, told the paper about the effect the closure was having on their daily lives.
Figures for the first 22 weeks of the year revealed significant drops in the number of recorded public order, burglary and criminal damage offences in the Co Leitrim District.
Supt. Kevin English told a Joint Policing Committee meeting that in 2015 year on year figures showed a 45% increase in recorded public order offences. In Carrick-on-Shannon, figures showed a 50% increase in public order offences on 2014 figures.
However, from January 1 to early June there was a 10% drop in public order offences, but the number of assaults increased by over 35% with the greatest increase in Carrick-on-Shannon.
The AGM of Leitrim County Council heard that there was the prospect of more jobs at the former MBNA site in Carrick-on-Shannon. Frank Curran, Chief Executive, told the meeting the former MBNA site was going to be “very busy soon.” This was in addition to the opening of Digital Office Centre Group's (DOCentre) newest campus on that site.
Cllr Mary Bohan (FF) was elected unopposed as Cathaoirleach of Leitrim County Council for 2016/2017. Cllr Sean McDermott (FG) was elected Leas Cathaoirleach.
Manorhamilton was described as “a town with no cash” after issues with the local 24 hour ATM “draining the whole town of commerce,” according to Cllr Felim Gurn.
LEADER funding to fund projects across areas such as enterprise development, rural tourism, enhancement of rural towns, and the provision of services for hard to reach communities was €5.9 million, down a whopping €2m from the previous allocation.
Library staffs in the county were not happy with plans to amalgamate services in Leitrim, Sligo and Roscommon and were to be balloted on industrial action. IT Sligo extended its campus infrastructure and operations into with the official opening of a new dedicated facility at The Hive, Leitrim's Technology Enterprise Centre in Carrick-on-Shannon.