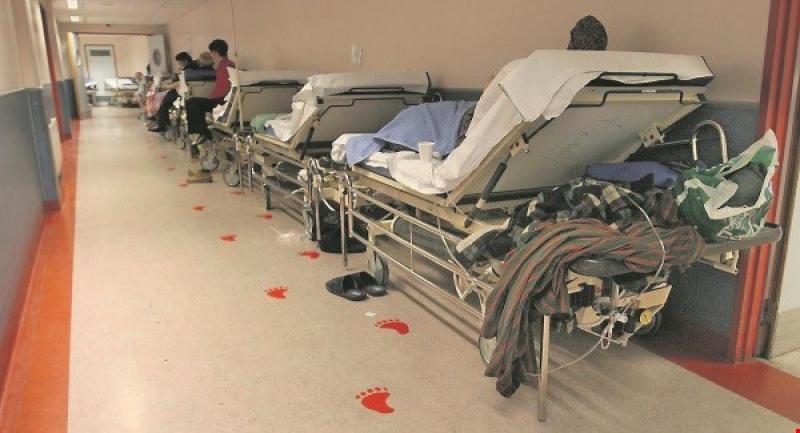 The Irish Nurses and Midwives Organisation’s (INMO) Trolley/Ward Watch figure has found that there was a record number of 612 patients, admitted for care, on trolleys in hospitals this morning.

Today’s record figure comes at a time when the Organisation’s Trolley/Ward Watch analysis, for 2016, confirmed there were 93,621 admitted patients on trolleys, during 2016 which is also a record figure for a calendar year.

Hospitals in the region showed that today there were 23 patients on trolleys in Sligo University Hospital, 32 in the Midland Regional Hospital, Mullingar, 18 in Portiuncula Hospital, Ballinasloe and 1 in Cavan General Hospital.

Figures for 2016 show that there were 2,308 patients admitted on trolleys in Sligo University Hospital, 4,849 in the Midland Regional Hospital, Mullingar, 892 in Portiuncula Hospital, Ballinasloe and 771 in Cavan General Hospital.

Today’s record figure was, in the view of the INMO,  entirely predictable arising from the trend running right through November/December, which saw a significant deterioration in the daily trolley watch figures compared to previous years.

In that regard questions must be asked as to what measures were taken, over the past 8 weeks to alleviate the situation and, in particular, to plan for the predictable surge in the early days of every new year.

It should also be noted that today’s record figure, of 612, must be compared to the figure of 495, which occurred in March 2006, when the situation was declared a ‘national emergency’.

Against the backdrop of today’s figure, and the trend of recent weeks, the INMO believes the following questions must be answered by the HSE/Department of Health:

-          What special steps/initiatives were taken, both during November/December and, particularly, over the recent Christmas/New Year period, in response to the deteriorating overcrowding situation;

-          What steps have been taken to implement the recommendations, of an expert group report last August, which called for additional nursing posts to be created and filled, to look after all admitted patients in Emergency Departments and extra patients on wards; and,

-          What immediate exceptional measures will be put in place to provide the additional nursing hours required to ensure these ill admitted patients can have the care they require provided to them?

The INMO believes health management must address these questions immediately and we await their reply.

“612 patients, admitted for care, for whom there is no bed, is a truly shocking figure.  The compromising of care, not to mention the loss of privacy and dignity, cannot go unchallenged and must be acknowledged and addressed by health management. We cannot allow this to become just another statistic and it must result in a fundamentally new approach to our health system as overcrowding, as the 2016 figures confirm, continues to grow.

"The stark reality is that in 2007, after it was declared a ‘National Emergency’, the number of patients on trolleys was recorded as 50,402.  However, in 2016 this has increased by 86% to 93,621.  This  confirms that successive governments’ approach, to the public health service, have failed to address this problem and it must now become a top priority for a government wide response in 2017.”

Mr Doran concluded, “Our genuine fear is, based upon a number of factors including the incidence of influenza and closed beds due to staff shortages, that, in the coming days, the situation may deteriorate still further.  An emergency response is now required and this must be forthcoming, from health management, immediately.”