Commemorating the life and times of Michael Collins

Large crowd at the event in The Bush Hotel 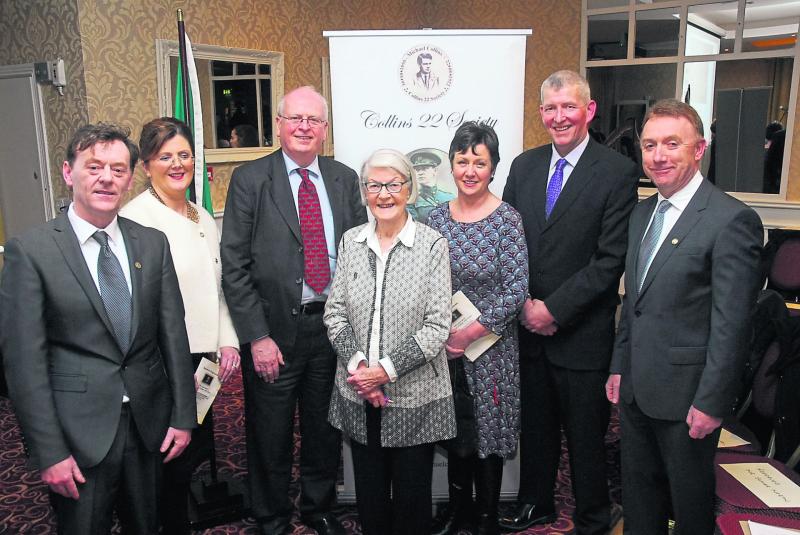 The event was hosted by The Michael Collins Fine Gael Branch, Carrick-on-Shannon, Co Leitrim with the support of the late Bill Martin and Gerry O’Connell, both of the Collins 22 Society.

Gerry O’Connell, Secretary of the Collins 22 Society and Chairman of the Fine Gael National Executive, was guest speaker at this Evening of History and Heritage in The Bush Hotel commemorating the 100th Anniversary of the 1917 visit of Michael Collins to the North West. Mr O’Connell spoke on Michael Collins and the GAA.

The programme for the Evening of History and Heritage included guest speakers, harp, piano and traditional music which was played throughout the evening.

Michael McManus, Chairman, Michael Collins Branch, Carrick-on-Shannon and James Martin produced a formidable and very moving presentation entitled: “Walking in the Footsteps of Michael Collins” which incorporated the local history of the area.

Pádraig McGarty, Senior Lecturer at the Institute of Technology, Tralee and a native of Mohill, spoke on “Politics and Society in Leitrim, Longford and Roscommon in 1917-Local History and Politics of Leitrim 1917.”

Senator Michael McDowell (Ind.), SC, who is an expert in this area, spoke at length on Michael Collins. Senator McDowell has stated, “Michael Collins was a man of all seasons; he was our George Washington, our Nelson Mandela…father of the democratic republic we live in today.”

Ava Brogan, from Carrick-on-Shannon, played on the harp, a selection of pieces composed by Mícheál Ó Súilleabháin and pieces by composer, Michael Rooney, previously of Monaghan, now living in Sligo, and tutor of Ava Brogan. Michael Rooney has himself been recently awarded Gradam Ceoil Composer of the Year 2017.

The McManus Trio, from Drumshanbo, played a wonderful selection of traditional music. A haunting rendition of ‘She moved through the Fair,’ was sung by Elsie Harmon and Eleanor Smith both of Carrick-on-Shannon. This is an old traditional folk song that is in the sean nós style and has many different versions.

Margot Gearty, niece of Kitty Kiernan, Granard, spoke of the fond memories of her home, her family, her aunt Kitty Kiernan - a recent poignant history of “bittersweet events.”

A very special thank you to a very large audience for their attendance on the night. A presentation of a framed picture of The First Dail was presented to the main speakers.

Remaining funds from the night will go to maintain flowers on the grave of Michael Collins in Glasnevin Cemetery. Flowers are changed every Saturday morning by the Dublin Branch Members of the Collins 22 Society.