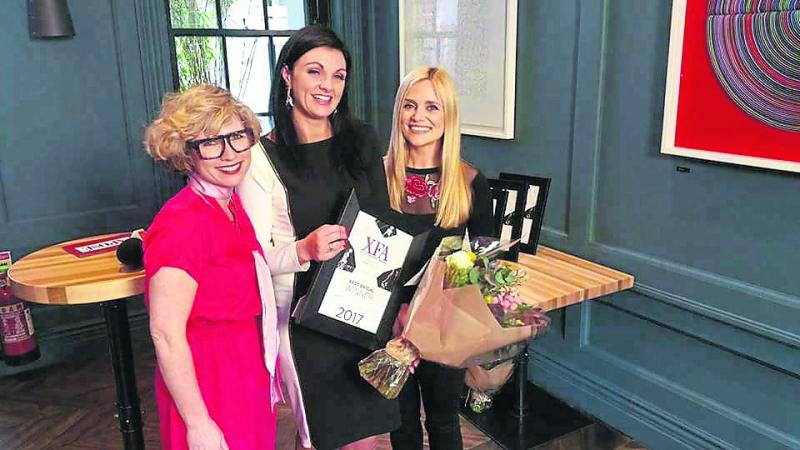 Padanee Bridal Couture on Main Street, Carrick-on-Shannon has won TV3's Xpose top Fafinder Award.
The store, owned by Patricia Corrigan, is three years old and was selected earlier this year as a finalist in the national awards for TV3 Fafinder Awards.
Padanee was shortlisted as one of the Top Bridal Boutiques in Ireland, together with renowned wedding store McElhinneys in Donegal and the eclectic accessory store The Parisian Bride in Dublin.
The top three Irish stores were chosen by Fashion gurus Sonya Lennon and Brendan Courtney.
The Best Bridal XFA 2017 winner was selected by public vote in which all brides, customers and friends of Padanee voted over the last few weeks.
Wednesday last, April 5 Patricia and partner Daniel Cross were invited to the Dean in Dublin for the announcement of the winners.
A media ban was then placed on all winners until the show was aired last Friday night, April 7 which added to the excitement when the announcement was made.
When speaking with Patricia, she told the Leitrim Observer, “I am genuinely overwhelmed with winning Best Bridal XFA 2017.”
She did say she truly believes that Carrick-on-Shannon has the most beautiful boutiques for fashion and retail in Ireland and that she is delighted that recognition was been shown for that.
This is the second year of the 'Xposé Fafinder Awards' in which Xposé celebrate the very best of Irish independent fashion retail.
Patricia said “its amazing to have Padanee win, however this would not have been possible without the trust of the brides who choose their Padanee gown and put their faith in a new local business.”
Patricia who opened the store in 2015 concluded, “The biggest thank you goes to the Padanee brides.”
The award is expected to bring even more brides to Carrick-on-Shannon as they hunt for the perfect wedding gown.
Patricia Corrigan is well known in the wedding industry and has previously been awarded Weddings On line Wedding Coordinator of the year 2010, 2011 and Mrs2Be Wedding Coordinator of the Year 2014.
If you are getting married and want to choose your Padanee gown contact Patricia on (071) 9616917 or weddings@padanee.ie