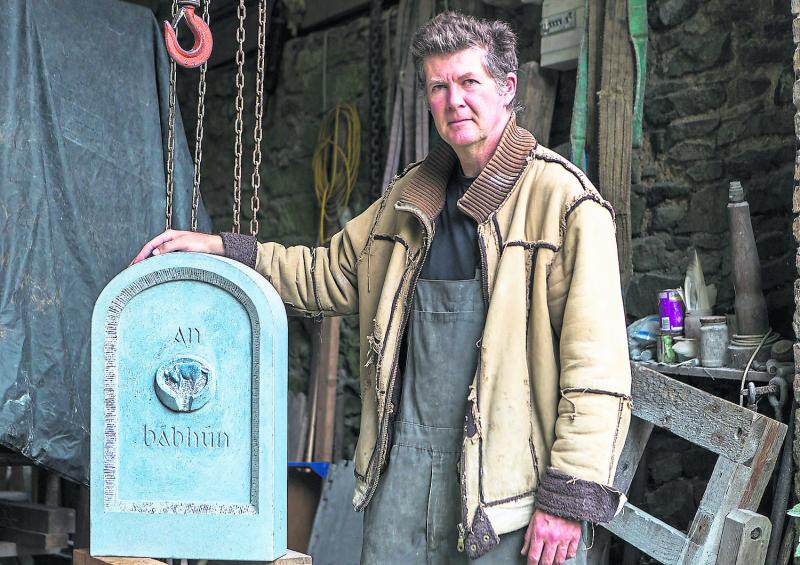 Manorhamilton sculpture artist Seamus Dunbar has been shortlisted as a Community Energy Champion in the 'Get Involved' SEAI awards for his hard work in raising energy awareness locally.
'Get Involved' is a way for local communities all over Ireland to work together to improve their own lives, create local jobs, and protect the environment. The awards initiative is developed by 51 local newspapers throughout Ireland.
The judges for this year’s award have been very impressed by Seamus and the North Leitrim Sustainable Energy Community (NLSEC) and how far they have come in just 12 months.
Seamus is the Chairperson of NLSEC group who are working to reduce the amount of energy and carbon consumption, identify energy sustainability and to make people aware of the amount of energy they use on a daily basis in the North Leitrim area. Seamus told the paper he is “astonished” to have been shortlisted but also delighted for the recognition of the hard work of the group.
He explained that the members who meet at least once a month put a huge amount of hours into research, consultations, attending conferences, meetings and filling out applications.
The group have established important links in the border region and nationally, they have established a Community Charter and are involved with businesses and residents in the Manorhamilton area.
The NLSEC will soon be incorporated as a Company Limited by Guarantee as part of their registration into a three year programme with SEAI.
The group have already raised much awareness and have been included in the Energy Master Plan. They are working with the community to reduce energy costs.
In the long term they want North Leitrim to be a leader in Green Energy Technology that is owned and controlled by the community.
The group are hoping to facilitate training in wind turbine construction this Autumn.
Funding is being sought to complete an Environmental Impact Statement in relation to the impact of a micro hydro station on the Owenmore River System in Manorhamilton.
In developing the micro-hydro scheme the SEC are collaborating with the Tidy Towns Committee and Leitrim County Council to develop the river frontage as an amenity area for the town and as a loop off the proposed SL&NCR Greenway.
The group have about 13 committee members and 13 associate members.
They hope to seek local funding shortly to progress a number of beneficial projects. They have also identified a part funded graduate programme which could allow them to employ someone full time for six months.
The Get Involved ‘Community Champion’ has a prize of €3,000 and will be awarded to the person that has made a very significant local contribution/effort to either producing local energy or involved in a energy conservation project.
The awards will be held in Dublin on May 11.