Gardai confident they will identify culprits who damaged Apache Pizza 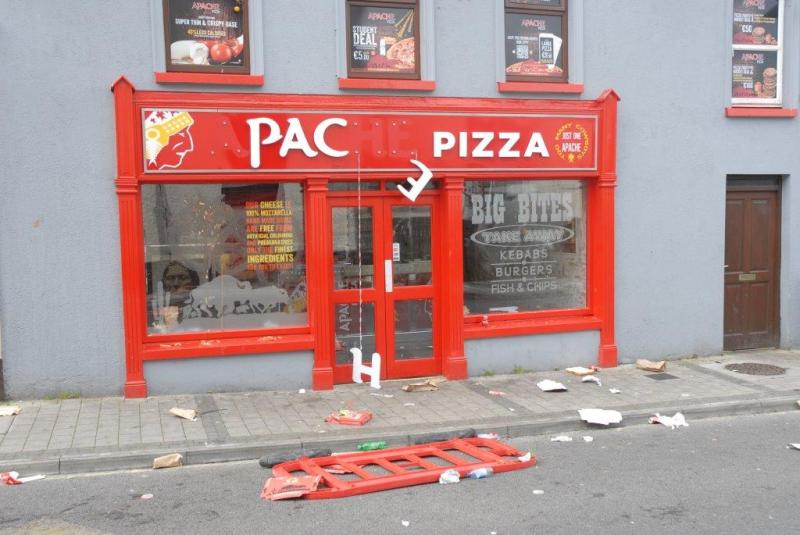 Gardai in Carrick-on-Shannon are analysing CCTV footage and are confident they will identify those responsible for the extensive damage caused to Apache Pizza in the town in the early hours of last Friday morning.

Residents in Carrick-on-Shannon awoke on Friday morning to find Quay Street in the town cordoned off as Gardai carried out a technical examination of the scene both inside and outside the Apache Pizza fast food restaurant.

The street was closed for a number of hours and reopened to traffic shortly before noon on Friday.
Gardai say that a group of students from outside the area are believed to be responsible for damaging the interior and exterior of the premises at approximately 3am.

A staff member also received minor injuries in the incident.

Local District Superintendent Kevin English spoke out strongly about the serious criminal damage that was caused
Supt English, condemning what happened, stated, “They cannot come into Carrick-on-Shannon and be permitted to commit that level of vandalism. It is a cause of deep concern from a policing point of view,” he said, and described their actions as both disrespectful and reckless.

“These are meant to be ambassadors for their schools,” he added.
While no arrests have been made to date, Supt English said they are confident of identifying those responsible.