“It was a wise move to go the route of law rather than professional golf!” 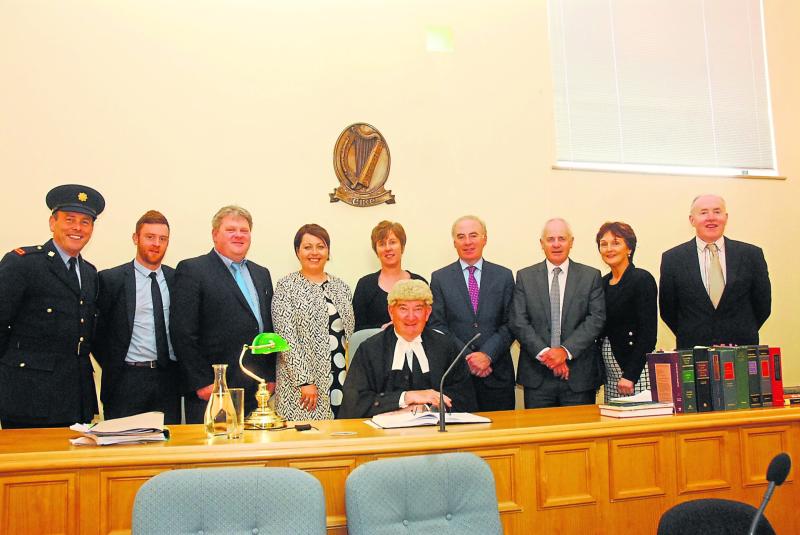 Warm and heartfelt tributes were paid to retiring Circuit Court Judge John O’Hagan as he commenced his final sitting in Carrick-on-Shannon last week.

Judge O’Hagan, a native of Co Louth, was a appointed a Judge of the Circuit Court in 1998 and in 2006 was appointed as the Circuit Judge for the Northern Circuit, covering counties Leitrim, Donegal, Cavan and Monaghan.

“On behalf of my colleagues thank you for your unfailing co-operation and consideration.”
Referring to the manner in which Judge O’Hagan presided over cases Mr Ryan commented, “You dealt with authority, in a fair-minded way.”

Adding that he always held Judge O’Hagan in the utmost regard, Mr Ryan added, “The best compliment I can give you is in respect of the most important people, the actual litigants. You dealt with them with compassion. Irrespective of what way the case went they got a fair hearing and a decent crack of the whip.”

Mr Ryan concluded by wishing Judge O’Hagan “A long and especially happy retirement.”
Those sentiments were echoed by Maura McNally BL who referred to Judge O’Hagan as “A role model for most of the people who appeared before you,” describing him as “The embodiment of fairness, justice and equity.”

She added, “You will be missed by all members of the Bar.”

Speaking on behalf of the Director of Public Prosecutions, State Solicitor Noel Farrell said, “For all us, the hallmark of a good, consistent, competent Judge, no more than a referee, is let matters flow without too much interjection,” adding, “This Court dealt with a lot of first time offenders and you always seemed to call it right.” 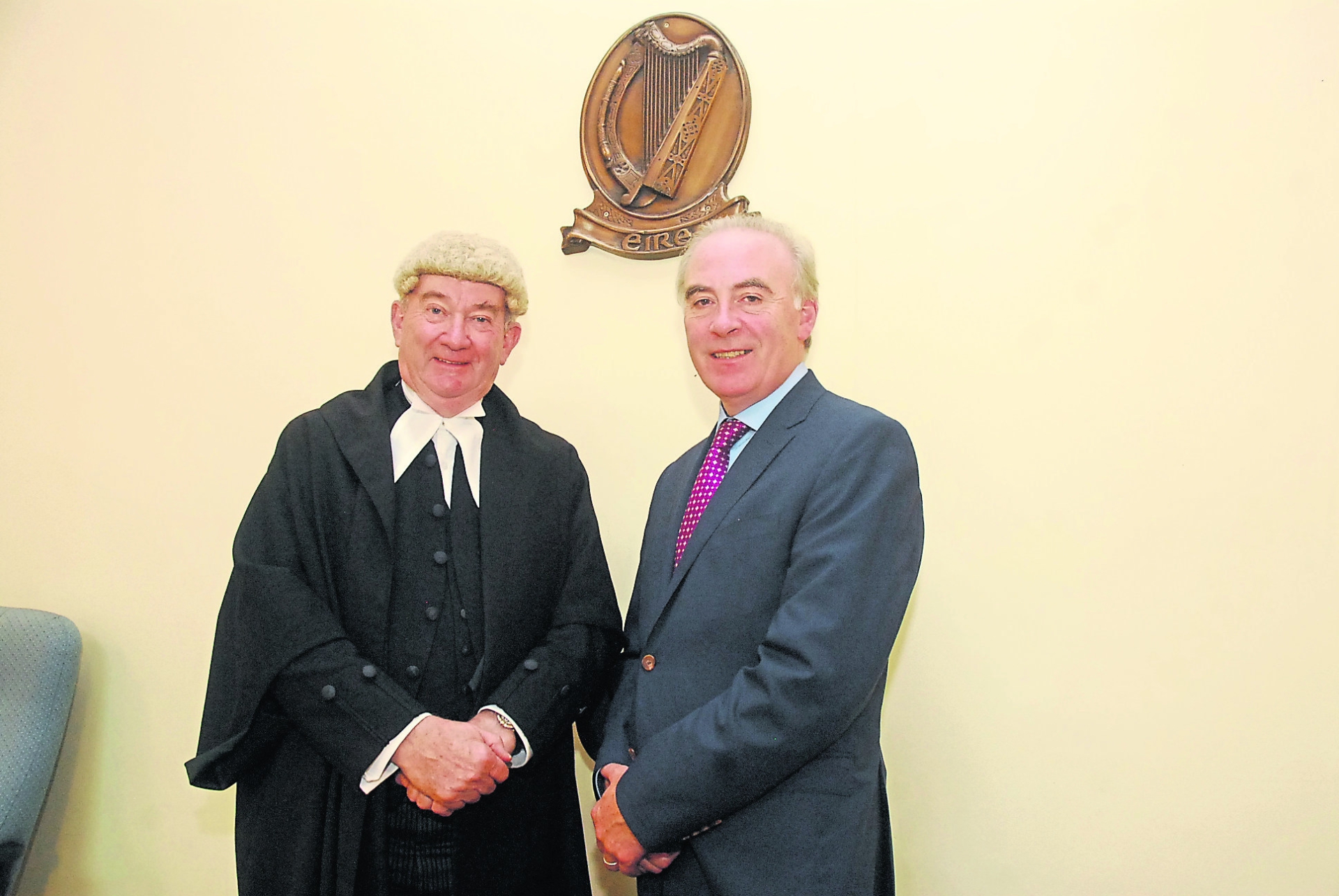 Mr Farrell added “The Court was never tension filled and that is to be greatly appreciated.”
Donal Keane BL referred to Judge O’Hagan’s time in Carrick-on-Shannon saying, “Your hallmark was dealing with compassion. There was no question of locking up and throwing away the key. You always made time for victims to make sure they were heard and you always gave credit for a plea of guilty.”
Mr Keane added, “On the civil side of things you had a great talent in encouraging settlements. 85% of the cases were settled rather than heard. You always took time to congratulate on settling.”

Mr Keane also congratulated Judge O’Hagan on the manner in which he encouraged school children to visit the Court and learn about the process saying, “It was fabulous you would do that and look after future generations.”

Mr Keane concluded by saying, “Thank you very much for your courtesy, you will be greatly missed.”
Insp Denis Harrington expressed his best wishes on behalf of Supt Kevin English saying, “Thank you for the courtesy and kindness you have shown to members of An Garda Siochana.”

Kevin Doherty, former Court Registrar and a long time friend of Judge O’Hagan, also paid tribute to the Judge and reassured him retirement is something he should very much be looking forward to.
“I can speak about matters other speakers are not familiar with - retirement. I’m three years gone out to grass and I recommend it highly.

“It is nice to be here to pay a well deserved tribute. It is sad that era of your life has come to an end.”
Mr Doherty added, “When you came here and I had the pleasure of meeting you, we played golf and socialised and formed a close relationship that has developed and thrived over the years.”

Continuing his tribute to a man he described as “An excellent raconteur and story-teller,” Mr Doherty added, “It was a wise move to go the route of law rather than professional golf!”

Michael McKenna also paid tribute to Judge O’Hagan on behalf of his colleagues in the Courts Service saying, “Thank you for your kindness and consideration. You gave clear and unambiguous judgement. Your preciseness and clarity was a Godsend. I know from talking to barristers and solicitors that you will be missed. Good luck to you and your wife Sandra and your extended family.” 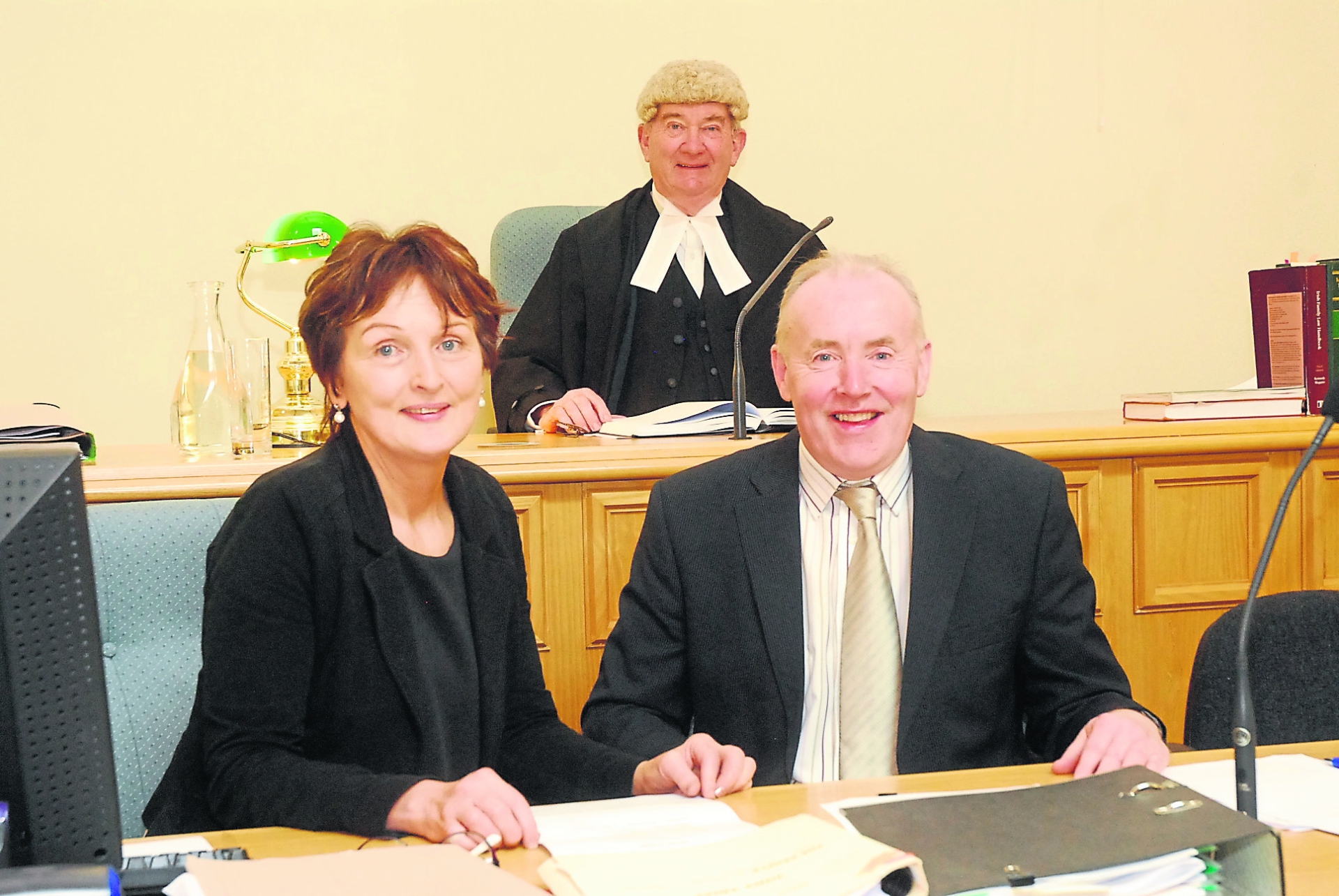 Having listened to the tributes pouring in his direction Judge O’Hagan joked, “Who are all these people talking about?”

Referring to the cases that have come before him during his time sitting in Carrick-on-Shannon, Judge O’Hagan stated, “90% of the cases I hear are assault causing harm.

“All young people, 18-25, all out jarring, the pub, takeaway, then invariably a fight. It is really sad.
“Parents come in and say my Johnny and Mary would never do that. The kids have no recollection. It is really sad to see all that talent wasted. It is something to keep an eye on.”

Judge O’Hagan paid tribute to those he has worked alongside in Carrick-on-Shannon saying, “I have made a fantastic number of friends here,” including former Judge Oliver McGuinness who was present for the tributes.

“I am now in the position I was in when Oliver McGuinness was retiring. It is great to see you Oliver, a super pal.”

Referring to another of his old friends Kevin Doherty, Judge O'Hagan said, “we cemented a relationship and friendship from day one, it never went away and hopefully it never will.”

Judge O’Hagan also paid tribute to the Court staff and singled out John Bredin for special praise.
“Thank you John Bredin, a master historian who brought Leitrim to the attention of people locally, nationally and worldwide.

“Michael (McKenna) and all the Geraldines (Cornyn and McWeeney), thank you. It makes it very easy for me that I have such an efficient staff available to me 24 hours a day.”

There was warm praise for the various criers who have served alongside him as well as An Garda Siochana with Judge O’Hagan saying, “The Guards have come under the microscope a lot. Nobody knows the work they have to do. Without fear or favour they put their lives at risk to look after everybody. They are an unarmed force for the most part. They have been wonderful to me.”

Judge O’Hagan also expressed thanks to the press, and prison services and addressed the members of the Bar saying, “I missed it like mad but I got to know it is much better up here (on the bench).”
He also expressed his gratitude to the solicitors who he described as “A body who act in a very professional way.”

As well as a distinguished legal career, Judge O’Hagan also enjoyed a lengthy military career having joined the FCA in 1963 and rose to the rank of Commandant.

Referring to his appointment in 2015 as Temporary Military Judge, he joked, “I got more salutes in those three weeks than an entire career in the Army.”

Judge O’Hagan concluded by wishing his colleagues well, saying he hopes to see them all socially and is “Looking forward to more motorcycling, more golf and more freedom.”