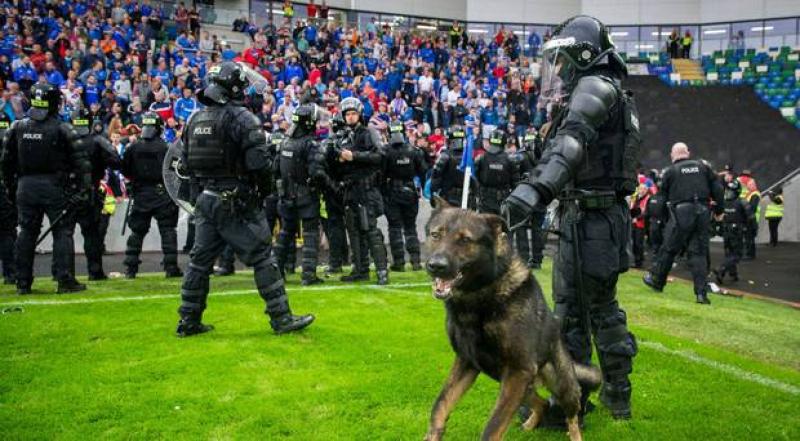 Police in riot gear at the match.

Ireland's largest big screen was brought all the way from Co Leitrim to a  Devenish pub complex in Co Fermanagh where  the car park was turned into a mini-Parkhead. An estimated 2,000 Celtic fans saw the match against Linfield at the pub. Sadly the match erupted into violence when it was played at Windsor Park in Belfast.

According to the Belfast Telegraph Linfield are facing serious punishment from European football chiefs, including heavy fines and a possible ban, after their fans attacked Celtic players with bottles and coins as their tinderbox UEFA Champions League qualifier at Windsor Park in Belfast erupted into violence.

Police in full riot gear and backed up by dogs rushed onto the pitch after the final whistle as home supporters threw missiles at stewards and PSNI officers standing between them and several hundred Celtic supporters who'd managed to get tickets for the match despite their club's refusal to take up their official allocation.

In a sometimes poisonous atmosphere, there were regular exchanges of abuse between the two sets of fans. And there could be further sanctions against the Belfast and Glasgow clubs over the singing of sectarian songs during the game, which ended in a 2-0 win for the highly-fancied visitors.

Celtic star Leigh Griffiths could also be disciplined after he ratcheted up tensions at the end of the match by tying a Celtic scarf around a Windsor Park goalpost.

He had also made a 5-1 gesture to home fans, a reference to Celtic's wins last season over Rangers, who have close ties with Linfield, the newspaper reports.

One Linfield fan who ran onto the pitch after the game was arrested. He signalled that he had been trying to get to Griffiths, who had been the target for most of the missile attacks as he took corners in the second half near the most raucous of the Linfield fans in Windsor's South Stand.

Last night Supt Norman Haslett from the PSNI paid tribute to, and thanked, what he said was the vast majority of fans from Linfield and Celtic who "behaved impeccably and enjoyed the football match".

He added, however: "Unfortunately there were a small number of incidents which police and other relevant authorities will be reviewing in the days to come."