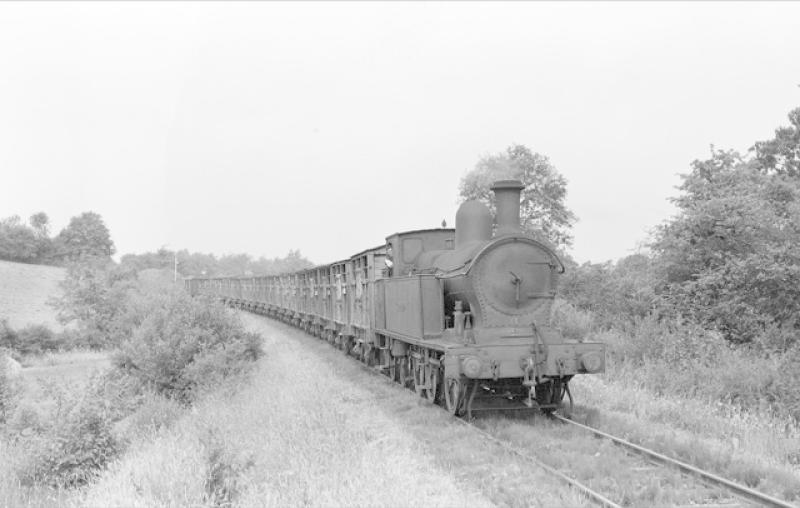 A train on the Sligo Leitrim and Northern Counties Railway (SL&NCR).

The Manorhamilton and District Historical Society is promoting a unique exhibition, which opens on this Friday, August 25 at 7.30pm in the Leitrim Sculpture Centre, to mark the closure of the Sligo Leitrim and Northern Counties Railway (SL&NCR) on September 30, 1957.
Margaret Connolly will speak on the SL&NCR on Friday night , which will run daily until Saturday September 3.
In a statement on the SL&NCR former Historical Society Chairman, Oliver Haslette gives an interesting insight into the its powerful effect on the lives of the people in Manorhamilton and its surrounds.
“Exhibitions of a town's past are especially interesting events. They tell the story of former days. How things were made work then. How people made a living. What made them happy and what made them sad. How all of the 'goings on' impacted on their children. What legacy remains today.
“In the forthcoming railway exhibition Manorhamilton will have just such an experience. The Sligo Leitrim & Northern Counties Railway also termed the Sligo Leitrim train, in the course of its existence, made so many things happen in the town, it can never be forgotten.
“The Historical Society in representing it, sixty years since its closure are now making that call. It kept the whole town alive in a vibrant way. The ease of travel it provided, gave its people a culture that other towns did not have. Business trips, shopping sprees, holidays, sporting events were there on a – go to, come from whenever – basis. Accessibility was taken for granted, unlike today.
“But conditions of the times impacted also. Large families were the order of the day then in Leitrim, just as throughout Ireland. As a consequence, during late teenage and early adult years people had to leave in order to live. Thousands did from the local station, many never to be seen again.
“Those final waves from the carriage window to distraught families on the platform were regular, heart wrenching but very common events and few families were spared. Today, as a consequence, North Leitrim's vast diaspora spans the world.
“However, those were the downside bits but what of the next train. Oft times, this train would be hauling sixteen, maybe seventeen wagons of fine healthy, locally reared cattle, heading northwards to their export market.
“Similarly, other trains would follow with a variety of other locally produced agricultural products and manufactured goods from Armstrong's and Haslett's plants in the town to various parts – in the rest of Ireland and England, all of this maintaining sustainability and support and keeping things alive on the home front.
“Certainly a major tribute to the energy and initiative of the farming community and the people of the time. So much then for the old days, but what of the present. Can we identify the legacy that the The Sligo, Leitrim Railway has left us today?
“Clearly we can. The strong farming foundation laid down then, continued to grow, expand and remain very much family focused. No stronger assertion of this could be better displayed than at the superb agricultural show recently held in the Bee Park, the same venue were the same event was proudly held in the days of the railway.
“Other energies of those times are very much still alive and well also. Direct employment in the town hinged somewhere around two hundred and fifty peoplewith up to 100 of those full time at the Railway Station in servicing and maintainence.
“Today that employment figure has well passed through the one thousand mark and growing. This employment level is well above similar towns of its size in The West of Ireland. It's factories are now exporting specialised goods all over the world with large trucks leaving town daily with products made in Manorhamilton for destinations to 'God knows where'.
“But this is where fluid transportation is missed and is greatly increasing the cost factor for the fine efforts that are being made by all in the town. Sixty years later our infrastructure is still seriously underdeveloped and unlike then, safe and trouble-free travel is a restricting factor.
“We know the railway will not work now, but the infrastructure to compensate in North Leitrim has not and is not happening. Unless fairness instead of influence is allowed to control infrastructural spending in the West of Ireland, specifically the past will return before the future brightens.
“Will we ever see the R280 properly upgraded to properly service all of the County of Leitrim? But looking forward to the future, has the railway still a part to play? What of those people who waved farewell to family and town in the 30s, 40s and 50s. Their descendants are now spread all over the world, possibly one million or more children, grandchildren and great grandchildren of Manorhamilton and North Leitrim.
“They all have one thing in common....their forebears left on the SL&NCR. Maybe many would like to see where it all began. Could this be made happen? What a huge economic boost to the town and what a 'welcome home ' party it would be !!!
“See you at the exhibition” Oliver says in conclusion.