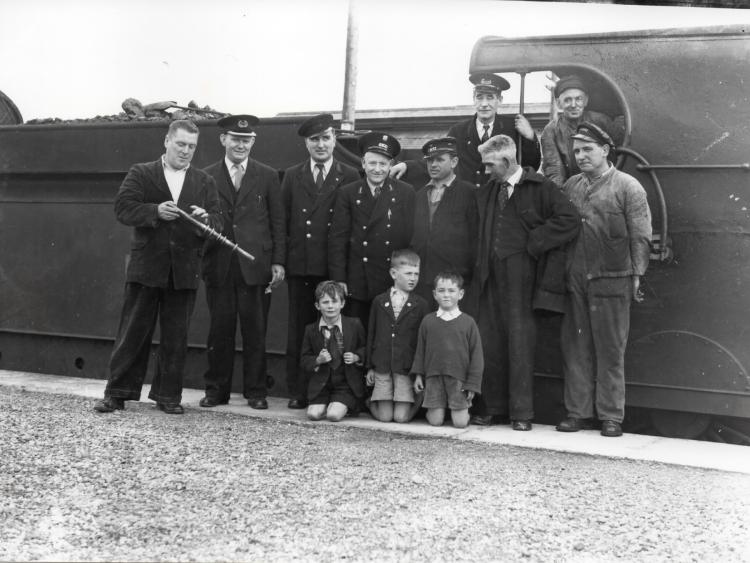 Members of staff of the Great Northern Railway in Bundoran pose for a photo with some local children ahead of the departure of the final train from Bundoran station on Monday, 30th September 1957.

An exhibition of artefacts on loan from the Ballyshannon and District Museum is on display for the month in Bundoran Community Library and includes such items as a piece of the old track and also an electric rail staff.  The library also has a selection of railway themed books for borrowing throughout the month allowing the young and not so young to learn about this important aspect of the town’s history.

Meanwhile in Bundoran Community Centre, a selection of photographs are on display for the month with a new permanent exhibition being installed in the coming weeks with photos that haven’t been seen before in the area, many of which were taken on the last day of operation of the train in Bundoran – 30th September 1957.

The month will culminate in a 3 day festival which will feature a number of exhibitions, drama, talks and nostalgic memories from September 29th to October 1st at various locations throughout Bundoran.

Chairman of Magh Ene Historical Society Michael Travers says there has been a lot of interest in the festivities “the railways always invoke a lot of nostalgia with people and ever since we announced the festival we have had numerous enquiries from people who want to know more about what we are doing and who are interested in attending our events at the end of September. We are delighted to have secured a number of great speakers for the weekend as well as the History Ireland Hedge School for the Saturday night.”

Bundoran Tourism Officer Shane Smyth added "we’re looking forward to welcoming railway enthusiasts from across the country for our festival weekend. There is a packed programme of events with other entertainment happening around town to coincide with the railway weekend."

More details of the weekend can be found on www.discoverbundoran.com/ railwayheritage