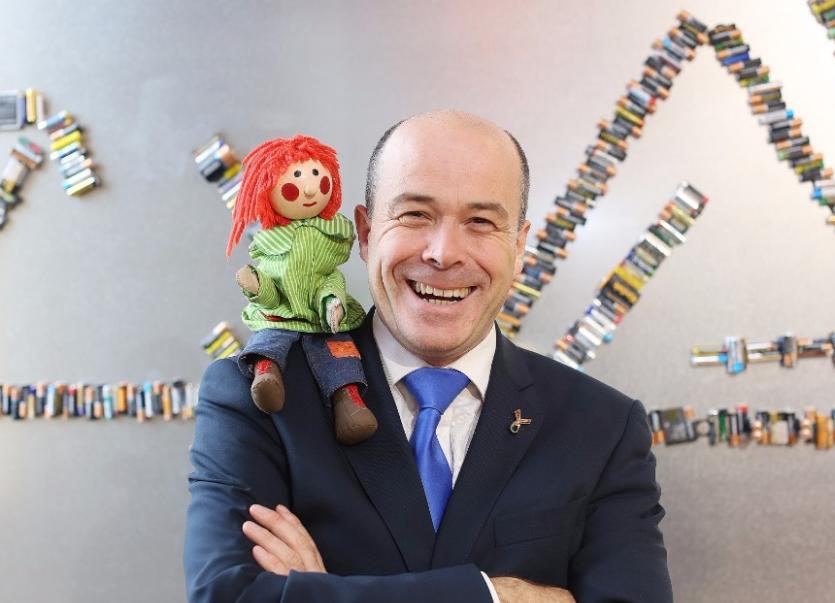 1 in 5 admit to putting waste batteries in the bin, but what a waste! Batteries can be easily recycled through schools participating in WEEE Pledge or in the blue recycling boxes in any of the thousands of shops that sell batteries across the country. It couldn’t be easier to make battery recycling part of the household routine.

Children across Leitrim have been playing their part over the last year through the WEEE Pledge schools battery recycling challenge. Winners of the programme in their county, St. Brigid’s NS, Carrick-on-Shannon, collected 85kg of batteries last year for recycling and will receive a prize of environmental and science educational workshops at The Rediscovery Centre.

Bosco was keen to remind all the mammies and daddies that recycling their waste batteries with WEEE Ireland also helps the boys and girls at LauraLynn, Ireland’s Children’s Hospice.

Launching the campaign, ahead of European Battery Recycling Day on Saturday 9th, Denis Naughten TD, Minister for Communications, Climate Action and the Environment said, “Every person in Ireland has the power to inspire change and take positive action. Recycling waste batteries is a free and easy way that every person in Ireland can make a real difference. I encourage everyone to take a look around their homes, schools and workplaces to find those waste batteries for recycling.”

Since 2011 Bosco and WEEE Ireland have made it their mission to not only make a difference to the planet, but also to the lives of the boys and girls with life-limiting conditions and their families at LauraLynn. The message has captured the hearts of many around Ireland and powered by peoples’ great battery recycling efforts, Bosco and WEEE Ireland have raised over €285,000 for the charity in that time.

Also at the launch, CEO of WEEE Ireland, Leo Donovan added, “Each Irish home has over 100 batteries at any one time- in toys, technology, TV remote controls, torches and other every day household items. The people of Ireland have been very active when it comes to achieving and surpassing our recycling targets, and we encourage everyone to make sure to recycle every last waste battery.

"With free blue box recycling points at every shop that sells batteries, grocery retailers like Aldi Ireland and with the WEEE Pledge programme operating in schools, everyone can avail of the service. We are delighted that our work has also supported LauraLynn which delivers the most incredible support to families all around Ireland.”

Commenting on this support, Sharon Morrow, CEO of LauraLynn said, “We are incredibly grateful for the continued support of WEEE Ireland and their battery recycling campaign. Thanks to the commitment of partners like WEEE Ireland, LauraLynn is able to provide the hospice care and emotional, social and spiritual support that children with life-limiting conditions and their families need. We’re encouraging everyone to recycle their batteries and take advantage of this chance to do something good for Ireland and our environment and raise much needed funds for our children.”

Bosco had the last word: “Don’t throw batteries in the bin, recycle them for LauraLynn!”