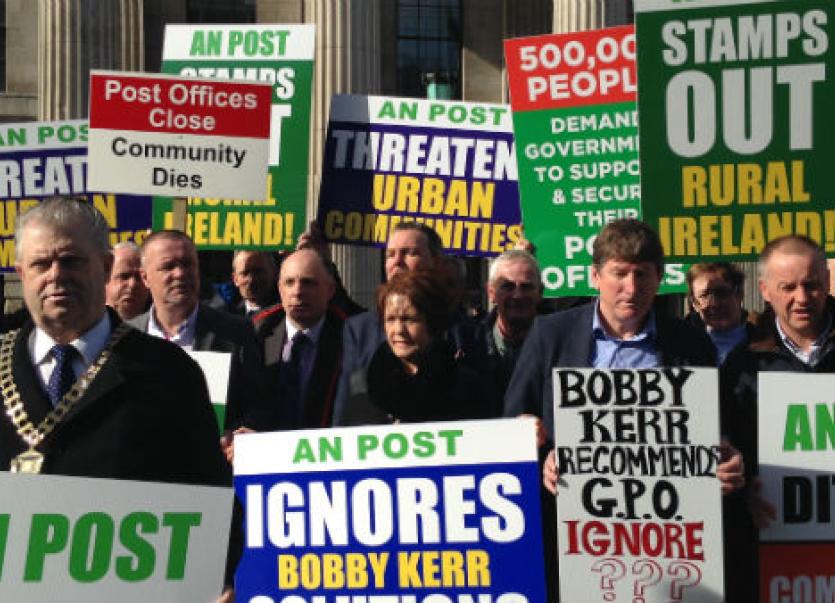 Postmasters attending a protest outside the GPO in Dublin earlier this year.

Postmasters have voted to reject an An Post proposal on the future of Post Offices – after their contracts have been threatened by the Company.

At a special National Meeting in Athlone yesterday (Sunday), members of the Irish Postmasters’ Union (IPU) called on the Minister for Communications, Climate Action and Environment Denis Naughten to support an investment programme in the Network which financially recognises the social value of Post Offices.

IPU General Secretary, Ned O’Hara, said An Post had contacted all Postmasters over the past two weeks threatening their Contracts over Members’ non co-operation with training on the new An Post Current Account.

IPU members had withheld taking part in the training pending an overall plan being agreed between An Post and Postmasters. Mr O’Hara said following the threat and concern raised among Members, they will now engage with An Post on the Account.

However, the new Postmasters’ Contract proposal which An Post made to the IPU in recent weeks was rejected.

IPU Executive member and Western spokesperson Pádraig McNamara said: “The proposed new Contract is for each Post Office to operate on a stand-alone commercial basis and places no value on Post Offices’ social function.

“The Post Office Network is under huge pressure as Postmasters’ incomes are falling dramatically. The IPU’s aim is to keep as many Offices as possible open, to introduce new services and to develop the Network’s social function within communities.

“We need to agree and introduce a mechanism of payment to Postmasters for the core social services they provide. Minister Naughten needs to address this issue. A much better plan is possible, and is required, if we are to keep Post Offices open in communities,” Mr McNamara said.

The IPU is meeting with Minister for Communications Denis Naughten this Thursday  – and say they will be demanding the Minister to intervene and invest in the Network.