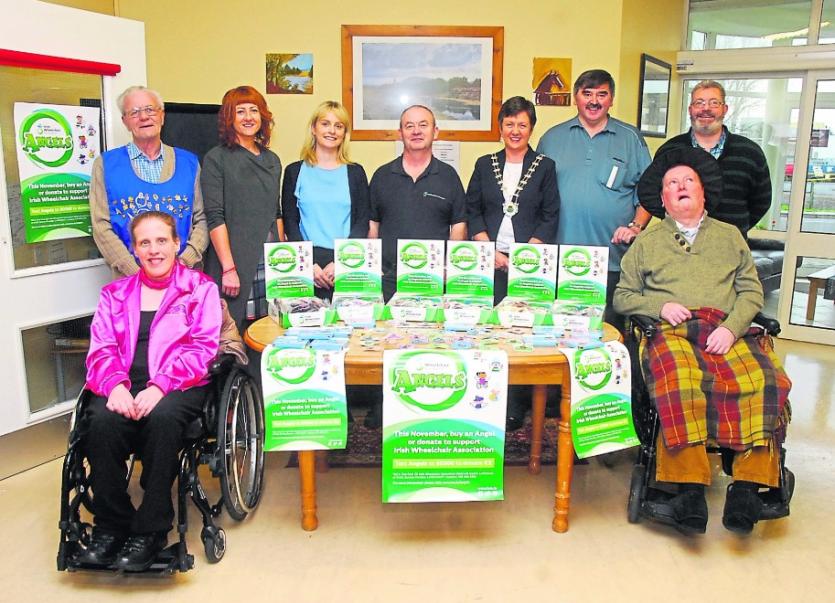 Pictured at the launch of the Angels fundraising campaign last Tuesday in the Irish Wheelchair Association Centre, Castlecara Road, Carrick-on-Shannon.

Angels is the largest fundraising campaign in IWA’s calendar and enables IWA to generate vital funds to continue to maintain the level of services provided to people with physical disabilities and their families throughout Leitrim.

IWA is asking local community groups, organisations, businesses, and schools to volunteer their time to assist with the Angels Campaign.

There are lots of ways to get involved with the campaign this year, including selling Angels pins or products, hosting an Angels event, or taking part in some of IWA’s organised initiatives taking place throughout the country.

All Angels Campaign information is available by visiting www.iwa.ie/angels

Speaking at the launch of the Angels Campaign 2017, IWA Angels Coordinator for Leitrim, Jeanette Beirne explained, “All funds raised during the Angels Campaign will be invested into the range of services and supports which IWA provides to people with physical disabilities living throughout Leitrim. Volunteers are key to the success of any fundraising campaign and this year IWA has more volunteering opportunities than ever, particularly in the lead up to the Angels Campaign.

“IWA’s Community Centre in Carrick-on-Shannon acts as a hub in the local community, a place where people can go to meet, get advice, seek support, learn new skills and socialise.

“Each week I am involved in supporting local people with disabilities to take part in training programmes, activities, sports or social events.

“The €2 donation IWA asks for once a year during the Angels Campaign has a significant impact on the lives of our local members.”

IWA is conscious that many local supporters are not available to volunteer during the day due to work and family commitments and instead ask that they Text Donate.

Donating by text takes seconds and is very simple. By texting ‘ANGELS to 50300’ you can make a direct contribution to the IWA.

IWA’s Fundraising Department would be delighted to support any Angels event by supplying an Angels Fundraising Pack which includes information, balloons, and a selection of Angels products to sell at the event.