Choir of Ages to sing on Ray D'Arcy Show this Saturday 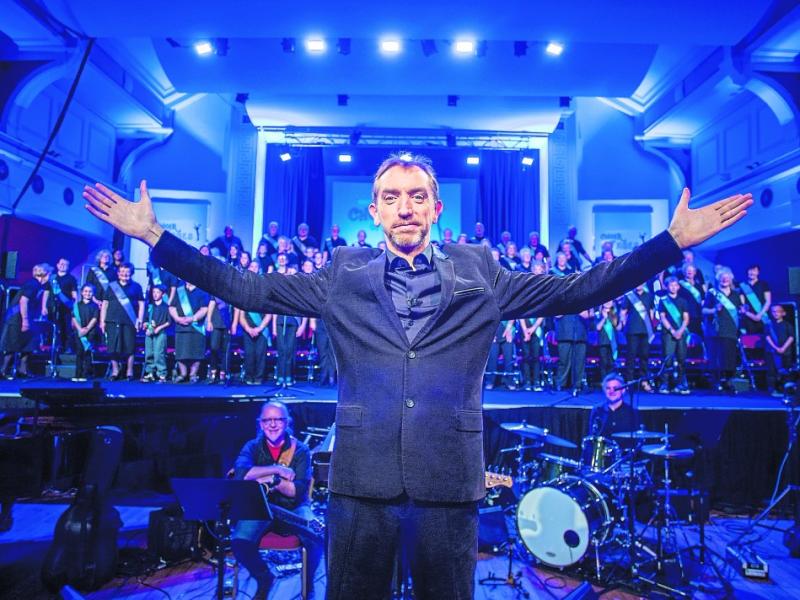 Choirmaster David Brophy is pictured with the Choir of Ages - which includes singers from north Leitrim.

David Brophy's Choir of Ages is set to perform live on the popular television show - the Ray D’Arcy Show - this Saturday evening, November 25 at 9.30pm on RTE1.

The choir is made up of people from all ages and backgrounds from North Leitrim and the Crumlin/ Walkinstown area of Dublin.

The youngest Leitrim participant is just 7 years of age and the oldest is 91 years young! There are 6 boys 12 girls, from National Schools in Kiltyclogher, Rossinver and Manorhamilton as well as members in the 63 to 91 age bracket. In total there are total 41 members.

The development of the choir follows on from David Brophy's transformational experience with the High Hopes Choir where he proved that music could bring hope and positivity to the lives of men and women affected by homelessness. He is now working to empower our youngest and oldest citizens, tackle loneliness and digital isolation, and to bridge the gap that exists between them through music with the Choir of Ages.

An Outreach Worker was approached by Tyrone Productions at the end of April this year with the idea of forming an intergenerational choir. Leitrim was chosen as one of the most rural counties to provide a contrast with the experiences of the Dublin choir. A number of different locations in Leitrim were considered but the New Ballagh Centre in Rossinver was chosen mainly because of its established and very trusted relationship with older people in rural North Leitrim (phone lines, befriending, Feel Good Clubs, courses and of course the RISE programme).

Following visits by David Brophy to local National Schools in Kiltyclogher and Rossinver, and to the Glens Centre in Manorhamilton, the first “Taster” rehearsal was held at the Ballagh Centre on 23rd May. Rehearsals continued from then twice a week throughout June, July, August and September.

Just 4 weeks after the Leitrim Choir was first formed they performed to an audience of several hundred people at the Stoneywoods Festival in Kiltyclogher on June 30 and this Saturday night they will be performing live on the Ray D'Arcy Show on RTE1.

The Choir of Ages will be singing Bob Dylan's song - Forever Young. Tune in this Saturday night for this very special performance.

See next week's Leitrim Observer for a special feature on the Choir of Ages.