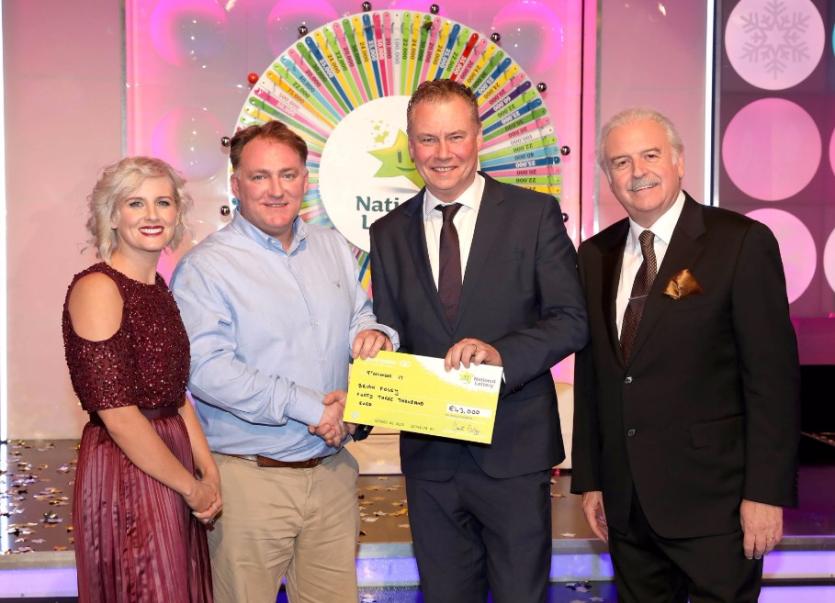 There were sparks flying for Leitrim electrician, Brian Foley, on Saturday evening when he scooped prizes worth a mega €43,000 on the National Lottery Winning Streak game show on RTE One.

GAA mad Brian is celebrating his 40th birthday early in the New Year and he plans to mark it in style by travelling to the Big Apple to support the Leitrim football team in a match against New York in May. After his impressive showing on Saturday, his trip will be a lot more comfortable.

The Carrick-On-Shannon man’s winnings including netting €22,000 in cash on the iconic Winning Streak Grand Prize Wheel and a holiday to Sorrento in Italy. He is busy getting ready for Christmas and his three-year-old twins, Aoife and Oisin, are looking forward to a visit from Santa. They really enjoyed their trip to Dublin, along with Brian’s wife (of nine years) Niamh, to watch him on Winning Streak last weekend.

In his spare time Brian is a GAA coach to the local ladies team in Leitrim, Kiltubrid GAA. He is a sports nut and likes every type of sport including being a huge Manchester United fan. He works as an electrician for an electrical contractor company called Designer Group, based in Blanchardstown, Dublin.

Among Brian’s family in the studio audience were his mum and dad, Margaret and Kevin, as well as his brother Shane and sister Siobhan. His other brother, Paul who lives in San Francisco joined via video link to deliver a good luck message to Brian.

This was the final episode of Winning Streak for 2017 but players are encouraged to keep sending in your three stars to the National Lottery over the Christmas period for your chance to appear on the show. Winning Streak returns to your screens, on RTE One, on Saturday 13th January 2018.

Winning Streak scratch cards also offer players the chance to win a once-in-a-lifetime luxury cruise for two worth €5,000. To enter the draw for the Luxury Cruise for two, entrants must collect the 3 letters S-E-A from the stub portion of their Winning Streak scratch card and send those into the National Lottery in the special grey stub envelope which are available from National Lottery retail sales agents. This week’s winner was Deirdre O’Gara, Portahard, French Park, Co. Roscommon.

The Winning Streak TV Gameshow is based solely on chance and there is no skill involved. To enter, players must submit a 3-star ticket in one of the special 3-star envelopes, which are available from all National Lottery Retail Sales Agents. On the Thursday preceding the gameshow, one hundred 3-star entries are drawn randomly in a preliminary draw that takes place under strict security controls in National Lottery offices. From these 100 entries, the five players for the following show are drawn and their names are featured on the gameshow.