Ronan McGreevy is pictured with his father Eamonn and his sister Nollaig at the launch in the GPO.

Irish Times journalist and local Carrick-on-Shannon native Ronan McGreevy will be signing copies of Centenary at 4pm in The Reading Room, Carrick on Saturday, December 16.

Centenary documents how 1916 was remembered last year at home and abroad and includes significant commemorative events in chronological order.

Each chapter includes testimonies from some of those involved in the events. The publication shows the breadth of events right across Ireland which took place to mark this pivotal moment in our history. 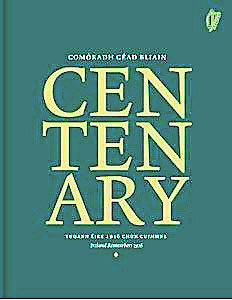 It also includes insights into the commemoration of WW1 and in particular the Battle of the Somme. In particular it captures how the commemorative events last year really tapped into the public imagination with over 3,500 events taking place across the country and abroad.

Centenary was described by historian Dr Marie Coleman in The Irish Times as “one of the best souvenirs of the centenary year and as valuable a commentary on 2016 as on 1916”.

This beautifully produced book features a unique linen green cover with gold embossed letters and tricolour ribbons and at €25 is the perfect Christmas present. It features the work of some of Ireland’s finest photographers and artists.
Mr McGreevy said: “I am delighted and honoured to be able support our local bookshop, The Reading Room, with this event. Leitrim played its part in the commemorations particularly with the restoration of Sean MacDiarmada’s cottage in the centenary year.

“The commemorations brought some pride back to the country following the collapse of the Celtic Tiger and the subsequent loss of economic sovereignty.

“It is clear that Irish people, when given the chance to express it, are proud of Ireland’s status as an independent nation and proud of the men and women whose vision brought it about. The evidence is in every page in this book.”

About the author
Ronan McGreevy is a news reporter with The Irish Times. He is the author of the book Wherever the Firing Line Extends: Ireland and the Western Front. He is the editor of Centenary, Ireland remembers 1916 the official State book recalling the commemorations of 2016. He is also the editor of Was it for This? Reflections on the Easter Rising, an anthology of commentary on the Easter Rising from the pages of The Irish Times which was published in 2016.