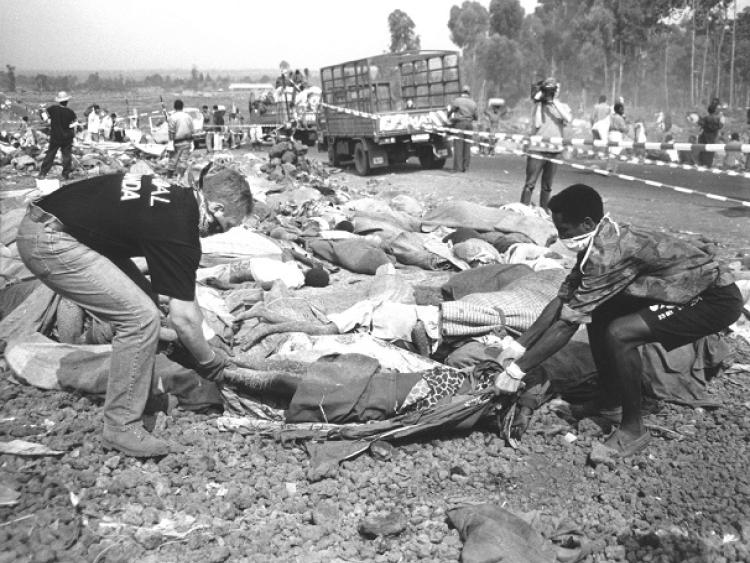 This Christmas, the aid agency, GOAL, marks its 40th anniversary. As the organisation’s longest serving member of staff and current Head of Programmes, Fiona Gannon, looks back on some of the highs and the lows from her own time with the organisation, from the Rwandan genocide in 1994 to the Ebola epidemic of 2014-2016.

"I joined GOAL in 1989. I had my first encounter with the founder of GOAL, John O’Shea, very soon after I joined. He was inspiring. There is no other word for it. When you meet people who are like that, who are visionary, who are leaders, they inspire others to follow them.

"I’ve been very lucky to work with GOAL and an incredible team of people over the past 28 years but there have been certain milestones along the way that have been particularly challenging and inspiring in equal measure.

"One million people crossed the border into Goma in Zaire (now the Democratic Republic of Congo) from Rwanda in one day, in fear of violent retribution for the genocide. When something like that happens, it’s impossible to explain what it looks like.

"I had been working with GOAL for five years when Rwanda happened. Just when you think you know everything around aid work, you find yourself dealing with a situation on a whole different level. GOAL was very quick to react and it became the largest response in our history up until that point. We moved into Goma, which is just over the border from Rwanda and set up a base there.

"Simple things like water and sanitation became a huge problem in the camps and very soon after the people arrived, a cholera epidemic broke out. Cholera is such a horrible illness. It can cause a sudden loss of fluid from a person’s tissues, causing people to die very quickly. So, parents who would have been looking after their children in the morning would be dead by the afternoon. It was incredibly traumatic.

"Approximately 40,000 people died in the epidemic and GOAL staff organised the burial of bodies. No one knew how to handle death at that scale and I think it was one of the bravest things we had ever done.

"I stayed in Goma for nine months, probably too long. It was a harrowing, traumatic experience and it took time to recover from it. I saw and bore witness to things in Goma that I would not wish to see again, anywhere.

"Ten years later, on St Stephen’s Day, 2004, a devastating tsunami hit South-East Asia, killing about 230,000 people and making millions more homeless. GOAL deployed teams to Banda Aceh in Indonesia, and to Sri Lanka. Again, we got there very quickly. What was unusual about the tsunami was the scale of it, and the sheer numbers of people affected.

"Because it was so catastrophic and on such a scale, and because of all the footage that was broadcast at the time, the tsunami became a huge focus for the public. Everybody, from schoolchildren to grandmothers, seemed to stop, down tools and raise as much money as they could. GOAL received more than €20 million from the Irish public. That had never happened in our history before. It was extraordinary.

"Very quickly, we had to decide the best way to spend this money. We were told by the Sri Lankan government that if we really wanted to help, then we should rebuild the schools, and build them back better. So that is what we did. We built 64 schools. That we could do so was thanks to all the people around Ireland who donated money to GOAL.

"In recent years, I worked as part of GOAL’s response to the Ebola crisis in West Africa. I led the GOAL team that staffed and managed a €15 million, 100-bed Ebola treatment unit.

"The scale of the Ebola outbreak was unprece­dented, and GOAL’s work to contain it was a new depar­ture for the organisation. In fact, it was the first time that GOAL had committed to running a treatment unit like that.

"Considering the dangers involved at the time, Sierra Leone was an incredibly difficult place for the staff to work. I remain tremendously proud of the speed, professionalism and effectiveness with which all our GOAL staff met the challenge.

"Today we are working in Sierra Leone with Johnson & Johnson and the London School for Tropical Medicine to develop an Ebola vaccine. Should we be successful in our efforts, every person in Sierra Leone will be offered the vaccine free of charge. That would be an enduring legacy for GOAL in a country with one of the world’s most fragile health systems.

"With crises still happening right across the world, from conflict in Syria and South Sudan to drought in East Africa, it is sometimes hard to fully appreciate that we do make a difference to people’s lives. But after working with GOAL for almost 30 years, I know that we do. And I still see a cause for optimism. While there are still very marginalised and very poor people in need of support, so much is improving.

"Someone asked me recently how I define success as an aid worker. I told them that success to me is when we leave. That GOAL is no longer required. In other words, when the local people turn around and say: ‘thank you, we can now do this ourselves’.

"I hope someday that organisations like GOAL will be required less and less." - Fiona Gannon, GOAL’s Head of Programmes