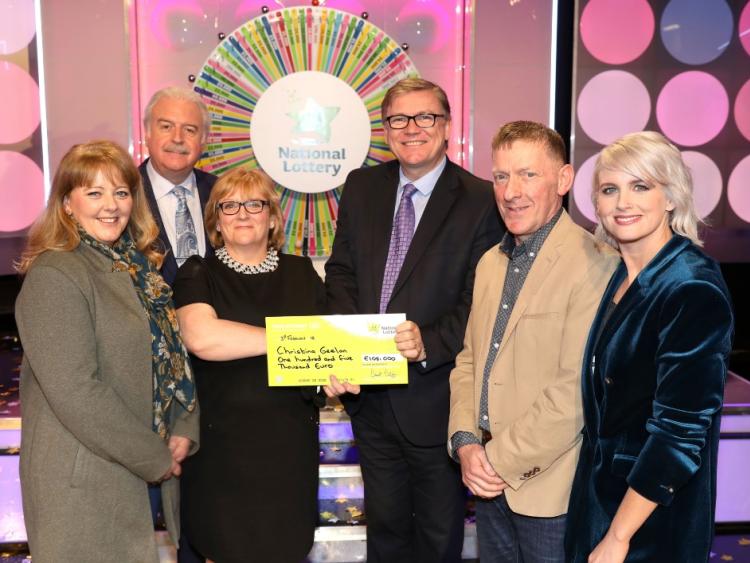 A lucky Leitrim lady and avid country music fan hit all of the high notes in last Saturday’s Winning Streak TV Gameshow as she spun the iconic Grand Prize Wheel and walked away with a massive €105,000.

Christina Geelan from Mohill, Co. Leitrim, admitted her shock at being selected to appear on the National Lottery’s TV Gameshow which is hosted by Marty Whelan and Sinead Kennedy.

Christina pulled over the car late the previous Saturday evening to take a call while en route home from visiting her mother in Carrick-on-Shannon. The call was from a friend frantic with excitement congratulating her on being drawn to appear on Winning Streak.

Christina was shocked and had to wait a few minutes to collect herself before continuing on the way home to where there was a family celebration afterwards.

Christina (57) is married to Fergus and the couple have three children; Leesa (23), Oisin (18) and Clodagh (27), who is living and working in Melbourne, Australia. Christina said she has been overwhelmed with the congratulations from well-wishers in the local community since last weekend.

A healthcare assistant by profession, Christina’s obsession is country western music and she loves going to concerts while doing a bit of dancing. Her favourite country artists are Jimmy Buckley and Patrick Feeney. With her massive winnings, Christina plans to book a sun holiday to escape from the cold weather and she also hopes to get some home renovations underway.

Winning Streak scratch cards also offer players the chance to win a once-in-a-lifetime luxury cruise for two worth €5,000. To enter the draw for the Luxury Cruise for two, entrants must collect the 3 letters S-E-A from the stub portion of their Winning Streak scratch card and send those into the National Lottery in the special grey stub envelope which are available from National Lottery retail sales agents. There winner of this week’s cruise is Annette Hanafee from Rahoon, Co Galway.

The Winning Streak TV Gameshow is based solely on chance and there is no skill involved. To enter, players must submit a 3-star ticket in one of the special 3-star envelopes, which are available from all National Lottery Retail Sales Agents. On the Thursday preceding the gameshow, one hundred 3-star entries are drawn randomly in a preliminary draw that takes place under strict security controls in National Lottery offices. From these 100 entries, the five players for the following show are drawn and their names are featured on the gameshow.