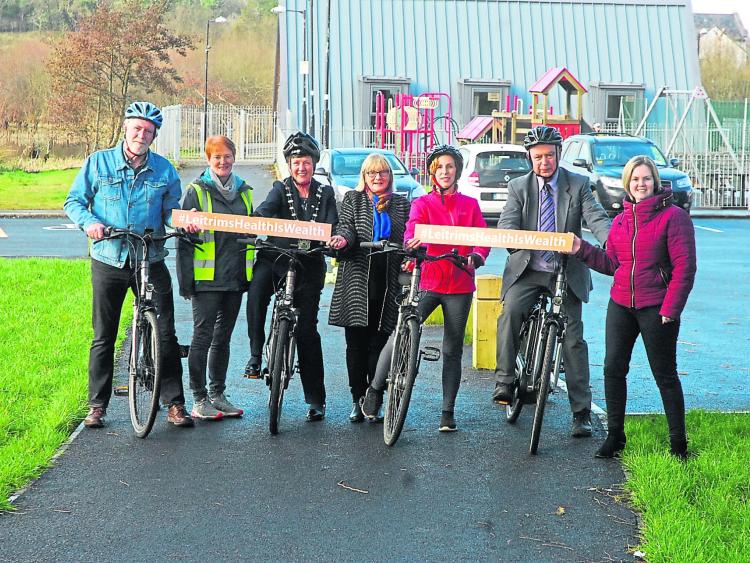 Hitting the road to raise awareness about this year's Leitrim's Health is Wealth event.

Following on from the phenomenal success of the first Leitrim's Health Is Wealth event last year, organisers, Hubert McHugh and Valerie Cogan, have confirmed details of the line-up for 2018. The free event is planned for tonight, May 16 in the Bush Hotel, Carrick-on-Shannon.
This year the master of ceremonies is none other than well known RTE presenter, Mary Kennedy. A household name and much loved presenter of Nationwide, Mary, will be leading the discussion at the event.

Author, GP and radio contributor, Dr Harry Barry
Nine years ago Dr Barry wrote his first book on mental health issues. Since then he has become a regular contributor to RTÉ Radio’s Today with Sean O’Rourke. His latest book, Flagging Anxiety and Panic – How To Reshape Your Anxious Mind And Brain, has already become a best seller. Dr Barry will be address the issue of anxiety, it's impact and techniques to people manage this.

Dr Owen Mulligan, Executive Clinical Director of the Sligo Leitrim Mental Health Service
Dr Mulligan will be giving a talk on the very important, and often sensitive area of, pre and post natal mental health. With a growing focus and awareness on the mental health of mums and mums-to be, Dr Mulligan will give a very useful insight into this area.

Anna May McHugh grew up on a farm in Ballylinan, Co Laois. She has worked with the National Ploughing Association for nearly 67 years, serving as the association's secretary for 21 years until 1973, when she was appointed its Managing Director. In that time, the National Ploughing Championships has become one of the premiere events on the annual calendar. Anna May will be sharing her story with Leitrim's Health Is Wealth.

Mary McEvoy, Irish actress
Mary McEvoy is known to a generation as Biddy Byrne in Glenroe, a role she played from 1983-2000, but her career has brought her much acclaim for her performances on stage and screen beyond this programme. At Leitrim 'Health Is Wealth, Mary will share the personal story of her difficulties with mental health.

Oisin McConville, author and former Armagh star GAA player
Oisín McConville is an Irish former Gaelic footballer who played for Armagh in the 1990s and 2000s. He won an All-Ireland Senior Football Championship medal, seven Ulster Championships and a National League title with the county and yet behind it all, he struggled to deal with a gambling addition. Oisin will be giving a special insight into his addiction, how it impacted his life and family and how he not only addressed his addition, but also his brave decision to write about his struggles.

Guest appearances
Well-known Leitrim performers, Eleanor Shanley and Charlie McGettigan will also be making a special appearance at the second annual Leitrim's Health Is Wealth event in the Bush Hotel, Carrick-on-Shannon tonight May 16, 2018. This event is free of charge and all are welcome to attend. Doors open at 7pm tonight.